Do not go gentle into that good night,
Old age should burn and rave at close of day;
Rage, rage against the dying of the light.

Though wise men at their end know dark is right,
Because their words had forked no lightning they
Do not go gentle into that good night. 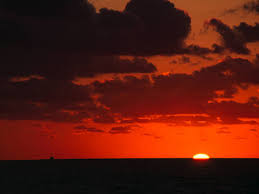 As we know the notion of the gap or crack in the world is central to Zizek’s philosophy, the sine qua non of its dialectical core or kernel. Between a passion for the Real and a passion for the Semblance humanity seems to be caught in the net of an illusionary drive toward opposing truths. Are either of these positions right? Zizek says there might just be a third way:

This vacillation between the Real and the Semblance Zizek tells us is at the heart of Plato’s Parmenides: in the history of philosophy, the first exemplary case of “vacillating the semblances” occurs in the second part of Plato’s Parmenides, with the deployment of eight hypotheses on the relation between Being and One (ibid, KL 1210-1212). What is unique in all of Plato’s dialogues is that he leaves out the one philosopher that could have helped him: Democritus. And it is to Democritus that Zizek turns for his concept of the gap between Being and the One: in Democritus’s notion of the non-word, den:

Democritean atomism is thus the first materialist answer to Eleatic idealism: Eleatics argue from the logical impossibility of the void to the impossibility of motion; Democritean atomists seem to reason in reverse, deducing from the fact that motion exists the necessity that the void (empty space) exists. The ultimate divide between idealism and materialism does not concern the materiality of existence (“ only material things really exist”), but the “existence” of nothingness/ the void: the fundamental axiom of materialism is that the void/ nothingness is (the only ultimate) real, i.e., there is an indistinction of being and the void.(Kindle Locations 1539-1544).

“If, for Parmenides, only being is, for Democritus, nothing is as much as being,” says Zizek. In order to get from nothing to something, we do not have to add something to the void; on the contrary, we have to subtract, take away, something from nothing. Nothing and othing are thus not simply the same: “Nothing” is the generative void out of which othings, primordially contracted pre-ontological entities, emerge— at this level, nothing is more than othing, negative is more than positive. Once we enter the ontologically fully constituted reality, however, the relationship is reversed: something is more than nothing, in other words, nothing is purely negative, a privation of something.(Kindle Locations 1544-1548). He continues, stating: 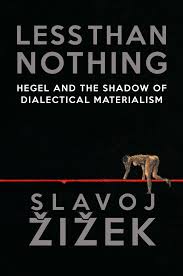 This, perhaps, is how one can imagine the zero-level of creation: a red dividing line cuts through the thick darkness of the void, and on this line, a fuzzy something appears, the object-cause of desire— perhaps, for some, a woman’s naked body (as on the cover of this book). Does this image not supply the minimal coordinates of the subject-object axis, the truly primordial axis of evil: the red line which cuts through the darkness is the subject, and the body its object?(Kindle Locations 1549-1552).

Zizek tells us that most – so to speak, atomists have gotten it wrong from the beginning, that they have turned this den, this less than nothing into its opposite, a something.

The rise of den is thus strictly homologous to that of objet a which, according to Lacan, emerges when the two lacks (of the subject and of the Other) coincide, that is, when alienation is followed by separation: den is the “indivisible remainder” of the signifying process of double negation— something like Sygne de Coûfontaine’s tic, this minimal eppur si muove which survives her utter Versagung (renunciation). The later reception of Democritus, of course, immediately “renormalized” den by way of ontologizing it: den becomes a positive One, atoms are now entities in the empty space, no longer spectral “othings”( less-than-nothings).(Kindle Locations 1522-1527).

So that an anachronistic reference to Kant can nonetheless be of some help here: meden follows the logic of negative judgment, it negates being as a predicate, while den asserts non-being as a (positive) predicate— den is nothingness (the void) which somehow “is” in itself, not only as a negation of (another) being. In other words, den is the space of indistinction between being and non-being, “a thing of nothing,” as the “undead” are the living dead.(Kindle Locations 1531-1534)

Den is that gap between Being and the Real.