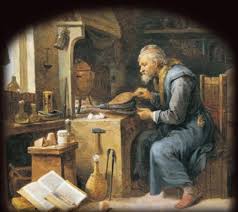 Even though Slavoj Zizek and someone like Graham Harman are diametrically in opposing camps, there is something I’ve discovered along the way. Harman is an avid reader of Zizek even if he opposes his base line materialism. You can find scattered throughout his oeuvre references to Zizek’s works from Tool-Being onwards. I often wondered why he was so interested in Zizek, and confronted the ideas Zizek upheld.

Both philosophers were at one time deeply influenced either oppositionally or  friendly toward the work of Martin Heidegger. You find references to Heidegger strewn through both philosophers works. Of late I’ve seen many people castigate Harman for his use of the notion of ‘withdrawal’, and yet, in other respects, even as late as Less Than Nothing (LTN), I see Zizek intensely working that term as well in alternating passages. In one of the notes in LTN Zizek remarks on Heidegger:

In another note on cyberspace and reality he remarks:

The standard argument against cyberspace is that we can always step out of it and re-enter the game at will, in contrast to real life in which we are stuck, with no space to withdraw to. The lesson of Buddhism (and the reason it comes close to the notion of reality itself as a virtual fantasy space) is precisely that we can withdraw from reality itself, since the very notion of firm reality is an illusion— we can withdraw not into another reality, but into the primordial Void itself. (Kindle Locations 24217-24220).

This withdrawal into the Void, the lesson of Buddhism and sunyata: the great emptiness of things?

In another extended quote he speaks of the Higgs Field:

The materialist solution is very precise, and it concerns the key paradox of the Higgs field: as with every field, Higgs is characterized by its energy density and by its strength— however, “it is energetically favorable for the Higgs field to be switched on and for the symmetries between particles and forces to be broken.”  In short, when we have the pure vacuum (with the Higgs field switched off), the Higgs field still has to spend some energy— nothing comes for free; it is not the zero-point at which the universe is just “resting in itself” in total release— the nothing has to be sustained by an investment of energy. In other words, energetically, it costs something to maintain the nothing (the void of the pure vacuum). Maybe some theosophical traditions are on the right track here, such as the Talmudic idea that, prior to creating something, God had to create nothing, to withdraw, to clear the space for creation. This paradox compels us to introduce a distinction between two vacuums: first, there is the “false” vacuum in which the Higgs field is switched off, i.e., there is pure symmetry with no differentiated particles or forces; this vacuum is “false” because it can only be sustained by a certain amount of energy expenditure. Then, there is the “true” vacuum in which, although the Higgs field is switched on and the symmetry broken, i.e., there is a certain differentiation of particles and forces, the amount of energy spent is zero. In other words, energetically, the Higgs field is in a state of inactivity, of absolute repose. At the beginning, there is the false vacuum; this vacuum is disturbed and the symmetry is broken because, as with every energetic system, the Higgs field tends towards the minimization of its energy expenditure. This is why “there is something and not nothing”: because, energetically, something is cheaper than nothing. We are here back at the notion of den in Democritus: a “something cheaper than nothing,” a weird pre-ontological “something” which is less than nothing.(Kindle Locations 21074-21089).

It’s interesting that he compares this voiding or withdrawal as part of the Kabbalistic (Scholem, Moshe Idel) Talmudic notion of God’s withdrawal within himself to the singular point that allows him to create a space for creation, etc. One last quote from Zizek:

Which brings us back to Heidegger’s claim that Hegel fails to include the phenomenal experience of negativity: what if negativity names precisely the gap in the order of phenomenality, something which does not (and can never) appear? Not because it is a transcendental gesture which by definition eludes the phenomenal level, but because it is the paradoxical, difficult-to-think negativity which cannot be subsumed under any agent (experiential or not)— what Hegel calls “self-relating negativity,” a negativity which precedes all positive grounding and whose negative gesture of withdrawal opens up the space for all positivity.(Kindle Locations 19412-19417).

Above he speaks of the gap in the order of phenomenality, something which does not (and can never) appear…

Of course Zizek speaks of the ‘subject’ as this self-relating negativity, whereas Harman speaks of real objects as this negative withdrawal or negation from the phenomenal realm. So that even though one is a substantialist (Harman) and the other an insubstantialist (Zizek) both use this Hedeggerian term to equivalent effect.

Now for some quotes from Harman from Tool-Being:

I hold that the same structure of withdrawal occurs even on the inanimate level: just as we never grasp the being of two pieces of rock, neither do they fully unlock the being of each other when they slam together in distant space. Contra Heidegger, withdrawal is not a specific feature of human temporality, but belongs to any relation whatsoever . (TB, 5)

Another passage of Harman’s explicitly mentioning Zizek and Schelling:

But the same objection would have to be made to Schelling that has already been made to Zizek. In Schelling’s works, the uncanny power of withdrawal from surroundings seems to belong primarily to the blind rotary God, and secondarily to human freedom. Despite Schelling’s magnificent sensitivity to nature, I am aware of no passage where he grants the uncanny X of withdrawal to specific entities such as donkeys, thistles, coniferous trees, or spoons. Yet this is precisely what must be done.(TB, 210)

And in one final passage he explicitly critiques Zizek:

In defense of Heidegger, it should be said that Zizek is right to distinguish the two positions, and wrong only in which of the two he chooses to defend. The idea that the human subject has a special capacity for self-withdrawal and retroactive phantasmatic positing of the world comes from an artificially limited sense of the as-structure (in this respect, Zizek falls into the same boat as the orthodox Heideggerians he so delightfully teases). Mistaking the gap between reality and appearance for the narrower gap between world and human, he exaggerates the status of human retroaction. Instead of being just one sort of projection among others, human fantasy is held to undercut any truly independent existence of the Real; as a result, Heidegger looks naive for thinking that Angst discloses being in its reality.(TB, 212)

Of course Zizek would argue that there is no difference between the two gaps: that the crack in the world is the same as the crack in human subjectivity. Humans fill the gap with fantasies because they as T.S. Eliot once remarked, “cannot bare too much reality” is the opposite of Harman’s meaning that they do not recognize the independence of the Real; its just the Real for Zizek is different than the Real for Harman. For Zizek the Real is independent of Being, the withdrawal of the void of both subject and world, not as independent totalities or wholes, but as-structures that are incomplete. For Harman there is only the fully deployed objects in a universe where something in each object withdraws into its real kernel, with gradations of interaction between its sensual and real qualities, allowing only for the phenomenal sensual interface of qualities touch other objects extremities.

One more quote from Harman:

The world has been said to contain no relations—nothing other than entities. But entities are always primarily withdrawn tool-beings, and as such, they are sealed away in a vacuum devoid of all relation. If this is true, then the world is packed with noncommunicating vacuous zones, ontological bubbles, none of them able to transmit energy or influence to the others. There are neither windows nor doors to be found. Any contact between distinct entities would seem to be impossible; for the same reason, any sort of alteration in the universe would also seem impossible. Is there any way to avoid these consequences by pointing to a medium through which tool-beings might genuinely interact? How can one vacuum impart its secrets to another? And what happens, ontologically speaking, when one entity perceives another, or lightly grazes it, or outright crushes it?(TB, 295)

Harman’s answer to this dilemma is to revive Occasionlism:

Given that direct ontological contact between substances now seems impossible, the time has come to revive some form of occasional cause. The traditional invocation of God as the source of such causes is both superfluous and unconvincing—after all, it would still have to be explained how God can touch the substances directly, and it is far from clear that even a deity could do so. The occasional causality I have in mind would have to occur on a more local level, and not away on high in the sphere of the divine. If a faulty electrical cord sets fire to a rug, even though the withdrawn tool-being of these objects never really comes into contact, then we must ask through what medium they affect one another at all. And in a strange sense yet to be determined, that medium will have to be another object, because according to the results of this book there is nothing in the universe but objects. To clarify this point would require a broader ontological theory not set forth at the present time—my purpose here is only to show the way in which Heidegger accidentally brings us to the borderlands of such a theory.(TB, 295-296)

I’ve covered Zizek’s path of the Void in other posts so will not quote him. Harman sees in Zizek a formidable opponent, saying, that “Zizek’s model is that of poking holes in ideological edifices, of trying to unmask any pretentious claims of the rigid designator to refer to an independent reality” (TB, 215-216). He continues:

In one of his references to the preontological realm present in thinkers from Kant to Lacan, Zizek also says that “in Derridean terms, we could designate it as spectrality.” But the object is a retrovirus, not a specter. No mere phantasm haunting the gap between the subject and its unfulfillable desire, the object fills the world with force, color, music, and electrical charges; it summons and cajoles its neighbors, or crushes them into splinters. Instead of continuing to embrace the hip “specter” of realism, contemporary philosophy should begin funneling arms and humanitarian aid toward some sort of guerilla realism—a fresh insurgency on behalf of objects themselves.(TB, 216)

That pre-ontological world is Zizek’s void and den, the vacuum and the less than nothing out of which arises Harman’s objects. Strange that Harman mentions the Void only twice in connection with Heidegger, and never in relation with Zizek in this book. Yet, he does rehearse Heidegger’s use of nothingness, Angst, or ‘being-toward-death’, etc. But nothing in relation to how Zizek sees these two nothing and less than nothing. Either way this was not the point of the exercise. Just wanted to jot down the use of withdrawal in a minimal exercise. Sometime it might be interesting to trace many of these terms throughout the corpus of both philosophers.

8 thoughts on “Slavoj Zizek and Graham Harman: On withdrawal…”