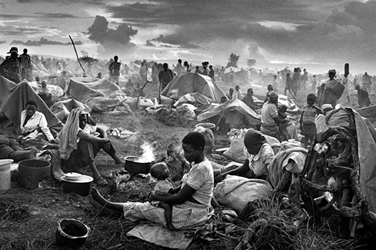 Mental illness is not the rare malady of an isolated dropout, but the widespread consequence of panic, depression, precariousness, and humiliation: these are the sources of the contemporary global fragmentary war, and they are spreading everywhere, rooted in the legacy of colonialism and in the frenzy of daily competition.
…….– Franco Berardi on the coming Global Civil War

For Berardi in his latest essay on e-flux – The Coming Global Civil War: Is There Any Way Out?  is a planetary wide civil war founded on a “necro-economy”, one in which the “all-encompassing law of competition has canceled out moral prescriptions and legal regulations”.

War has become big business for the great Crime Cartels across the planet: “Like neoliberal corporations investing money in the ultimate business, the Iraqi-Syrian caliphate and the Mexican narco army pay salaries to their soldiers, who are necro-proletarians.”

They even utilize capitalist media to promote and recruit: “In a video released by Dubiq, the advertising agency of the Islamic State, the rhetoric is the same as any other type of advertising: buy this product and you’ll be happy.”

Berardi blames the interventionist policies of the U.S. and NATO for much of the current state of civil war in East European nations over the past twenty years: “1990, the United States cut off all forms of credit to Yugoslavia… March of 1991, fascist organizations in Croatia called for the overthrow of the Socialist government … Ethnic-religious wars caused around 170,000 casualties, as ethnic cleansing was practiced in every area of the federation… Twenty years after the Nazi-neoliberal wars of Yugoslavia, in all those small nation-states (except perhaps Slovenia) unemployment is rampant, people are impoverished, schools are privatized, and public infrastructure is in disrepair.”

Berardi will ask if the current refugee crisis across Europe will be a harbinger of terror or holocaust? – “From the Balkans to Greece, from Libya to Morocco, are the ten million people amassing at these borders going to be the perpetrators of the next terrorist wave? Or will they be the victims of the next Holocaust?”

With nothing but “perpetual economic stagnation, emerging markets are crumbling, the European Union is paralyzed”: “The only imaginable way out of this hell is to end financial capitalism, but this does not seem to be at hand.”

Yet, Berardi, a believer that the neo-intellectuals of the hyperlanes can move the ball forward tells us that in this “obscurantist time” all we can do is “create solidarity among the bodies of cognitive workers worldwide, and to build a techno-poetic platform for the collaboration of cognitive workers for the liberation of knowledge from both religious and economic dogma.”

The cognitariat is part of the problem, not its fix. Look at the state of the Left. All the books published, journals written, academics spreading their usual claptrap, students occupying little and less among the meaningless margins. Berardi seems to live pre 1968 as if the old 60’s Culture could be reignited in a new world of electronic hippiedom, flower children and communist propaganda alive and well in the broadcast lanes of our network marginal drift. Knowledge liberated or not is not going to change a thing. One could speak of change of consciousness all day, all night, but it is the same old tale that has yet to change anything. If raising consciousness could really effect change then one could stop writing tomorrow, for the best and greatest literature for that has already been written. Art, music, protest? All these old forms are defunct, passé, and have become parody or parodies in our age. In an age of Reality TV people support the fantasy of fantasies their parents only dreamed of. People no longer want Truth or truths, instead we live in the age of loss and forgetting. People want to forget the problems of the world, hide away in their virtual worlds of hyperplay, raves, travels…

Berardi speaks truth when he says “the future of Europe is held captive by the opposition between financial violence and national violence”. Ethnic, religious, political violence is and will remain an emerging aspect of the next centuries civil war for the planet’s resources. The empires battle for land, resources, and power while their people are kept in ignorance or ideological hell with mediatainment systems that promise freedom and give nothing but the complete degradation of fatalism.

As Berardi says in his closing statement: “Globalization has brought about the obliteration of modern universalism: capital flows freely everywhere and the labor market is globally unified, but this has not led to the free circulation of women and men, nor to the affirmation of universal reason in the world.” While the general intellect is absorbed into the “corporate kingdom of abstraction is depriving the living community of intelligence, understanding, and emotion”.

Ultimately Berardi sees no light at the end of the tunnel, only more “mental suffering, and on the other side, the much-advertised cure for depression: fanaticism, fascism, and war. And at the end, suicide.” In an age when the fragmented mass suicide act is itself just one more Reality TV spectacle for the 15 min fame lists what is to be done? No one is secure, safe, protected from the others in their midst. One’s own family might be the most violent terror one confronts in one’s daily life. The truth is two hundred years of predatory capitalism has brought us the state of art nihilism around the globe. Now we pay the maker… the cannibals, zombies, spectral apparitions of former worlds are returning and they are pissed.

Read essay on e-flux The Coming Global Civil War: Is There Any Way Out? © 2016 e-flux and the author

1 thought on “Franco Berardi: The Coming Civil War of the Planet”