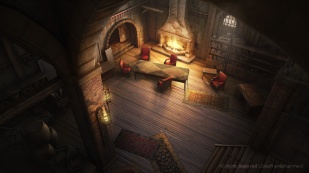 Once again the ancient round turns its wolf-faced teeth toward home: the dark clot of blood below the breath, the rumbling in the belly, the burning eyes that seem to foretell a bone moon. I hear the kids in the streets popping fire-crackers, black-cats shading the night with bullet pops like a drive-by. My Lady’s in bed, and here I sit as usual mindful of the stupidity of the human species. I return to my old haunts: Nietzsche, Cioran, Land, Maldoror, Celine, Miller, Bataille, Ligotti, Lovecraft… wander through the desolation without repentance, unblessed and thankful only to have reached the abyss once again.

“Something serious about stupidity which, oriented differently, might multiply the stock of our masterpieces.” (E.M. Cioran: All Gall Is Divided)

Cioran’s swift viperous tongue lifts one up only to slash and burn one to pulp. Something lives inside me that is Cioran’s dark twin, a gloating demon sitting on the edge of the abyss studying the human species like some foreign entity: curious, investigative, silent; awaiting the moment when in the silence one can slowly and methodically tear down the scintillating illusions that clothe such mediocre beings in the garments of rancorous ruins.

“I thought of death, which I imagined to be similar to that walk without an object…” (Nick Land: The Thirst for Annhilation).

Nick Land is a wolfen, a were-being masking himself in the flesh of humans. His black comedy of darkness cuts down every escape, brings one to the end, holds the blade out to you and awaits your self-immolation. Land scrapes you clean, bared of every last vestige of humanity, ready for only the bare truth that will reawaken the necessity of night and chaos once again in your heart.

“If we simply called ourselves godless (to use an old expression), or unbelievers, or even immoralists, we would not think that these words came near to describing us: we are all three of them, at too advanced a stage for anyone to comprehend…” (Friedrich Nietzsche: La Gaya Scienza)

Nietzsche gave us the voice  and utterance of the anti-christ. This solitary ghost stalked Europe like a god forgotten among the brittle cracks of Victorian idiocy. Son of those great nihilists of Shakespeare and Fyodor Dostoyevsky he gave us the truth for our age: “God is Dead!”

“I use my genius to depict the delights of cruelty: delights which are not transitory or artificial; but which began with man and will end with him.” (Comte Lautreamont: Maldoror)

The secret guest of our earthly banquet. Sade’s other brother, more wicked and quicker; wittier.

“This is better than reading Vergil.” (Henry Miller: Black Spring)

“I am living at the Villa Borghese. There is not a crumb of dirt anywhere, nor a chair misplaced. We are all alone here and we are dead.

“Last night Boris discovered that he was lousy. I had to shave his armpits and even then the itching did not stop. How can one get lousy in a beautiful place like this? But no matter. We might never have known each other so intimately, Boris and I, had it not been for the lice.

“Boris has just given me a summary of his views. He is a weather prophet. The weather will continue bad, he says. There will be more calamities, more death, more despair. Not the slightest indication of a change anywhere. The cancer of time is eating us away. Our heroes have killed themselves, or are killing themselves. The hero, then, is not Time, but Timelessness. We must get in step, a lock step, toward the prison of death. There is no escape. The weather will not change.”  (Henry Miller: Tropic of Cancer)

Miller was the Beast incarnate, the blood of the Saints come back to haunt the living with the sexual licentiousness of a catechism born of laughter and disgust.

“It’s no use trying, we slide, we skid, we fall back into the alcohol that preserves the living and the dead, we get nowhere. It’s been proved. After all these centuries of watching our domestic animals coming into the world, laboring and dying before our eyes without anything more unusual ever happening to them either than taking up the same insipid fiasco where so many other animals had left off, we should have caught on. Endless waves of useless beings keep rising from deep down in the ages to die in front of our noses, and yet here we stay, hoping for something . . . We’re not even capable of thinking death through.” (Louis Ferdinand Céline: Journey to the End of Night)

Celine is the first machine. Death becomes acquainted with repetition’s other lover. Here is the poetry of atrocity seen with dead eyes:

“Many times in my life, and in many different places, I have found myself walking at twilight down streets lined with gently stirring trees and old silent houses. On such lulling occasions things seem firmly anchored, quietly settled and exceedingly present to the natural eye: over distant rooftops the sun abandons the scene and casts its last light upon windows, watered lawns, the edges of leaves. In this drowsy setting both great things and small achieve an intricate union, apparently leaving not the least space for anything else to intrude upon their visible domain. But other realms are always capable of making their presence felt, hovering unseen like strange cities disguised as clouds or hidden like a world of pale specters within a fog. One is besieged by orders of entity that refuse to articulate their exact nature or proper milieu. And soon those well-aligned streets reveal that they are, in fact, situated among bizarre landscapes where simple trees and houses are marvelously obscured, where everything is settled within the depths of a vast, echoing abyss. Even the infinite sky itself, across which the sun spreads its expansive light, is merely a blurry little window with a crack in it—a jagged fracture beyond which one may see, at twilight, what pervades a vacant street lined with gently stirring trees and old silent houses.” (Thomas Ligotti: Grimscribe – In the Shadow of Another World)

Ligotti is the anti-gnostic, an abyss dweller whose immanent domain is pain incarnate. (an interview)

“In  the darkness  we  sometimes  reached  out  toward one  an­ other. We would look into one another’ s  eyes, not with­ out dread;  we  were  bound  together,  but  we  no longer felt  the  slightest  hope.  At  one  turning in   the  path,  an empty space opened beneath us .  Curiously,  this  empty space,  at our feet,  was no less infinite  than a starry sky over  our heads .  Flickering in the  wind , a multitude  of little lights was  filling  the night with silent, indecipher­able  celebration .   Those  stars – those  candles – were flaming  by  the  hundred  on  the  ground :  ground  where ranks  of  lighted  graves were  massed .  We  were  fasci­nated  by  this  chasm  of  funereal  stars.”  (Georges Bataille: Blue Noon)

Bataille is the sensual saint of desperate days. The Clown whose sacred dance revealed nothing more than the true religion of the Sun.

“This thing, which seemed instinct with a fearsome and unnatural malignancy, was of a somewhat bloated corpulence, and squatted evilly on a rectangular block or pedestal covered with undecipherable characters. The tips of the wings touched the back edge of the block, the seat occupied the centre, whilst the long, curved claws of the doubled-up, crouching hind legs gripped the front edge and extended a quarter of the way down toward the bottom of the pedestal. The cephalopod head was bent forward, so that the ends of the facial feelers brushed the backs of huge fore paws which clasped the croucher’s elevated knees.” (H.P. Lovecraft: The Call of Cthulhu)

Lovecraft walked among the living dead and brought us the Old Ones who dream our dreams forward.