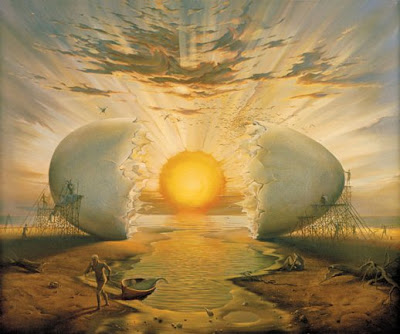 This is the genius of empiricism, which is so poorly understood: the creation of concepts in the wild, speaking in the name of a coherence which is not their own, nor that of God, not that of the Self, but a coherence always on the way, always in disequilibrium with itself.
– Giles Deleuze, Desert Islands and Other Texts

In this interview Deleuze reminds us that sense is an “effect,” an effect produced, whose laws of production must be uncovered (137).1  For Deleuze sense as an effect was produced by a specific machinery of thought. And, for him the new philosopher must become a machinist, or operator of those new concepts. I would only add the poet(ess) as the primal engineer of tropes-as-concepts or figures of thought and imagination for whom poems are small engines in which the healing of the world becomes possible.

In this early essay Deleuze was already moving ahead of all his contemporaries, and I might say, even my own contemporaries, in his mode of thinking. Already his conceptions eliminated the older humanistic value systems, the subject-as-Self of the old Germanic Transcendentalists as solipsistic purveyor and owner of the Cosmos. This old concept of the subject-as-I, must, he tells us become other, not in some atheistic paean against religious sensibilities; no, as he says: “We can’t let ourselves be satisfied with that…” Instead what he saw on the horizon was a new conception emerging, the notion of “impersonal individuations, or even pre-individual singularities”: we are entering the age of the liquid singularity with no name, no identity, no law. For Deleuze this was a political act, a way to liberation:

You see, the forces of repression always need a Self that can be assigned, they need determinate individuals on which to exercise their power. When we become the least bit fluid, when we slip away from the assignable Self, when there is no longer any person on who Power can exercise its authority or by whom it can be replaced, the police lose (138).

Philosophy and poetry, both, have a task toward this liberation. Only there are two ways of doing this: 1) on the one hand there is critique of false applications: false morality, false knowledge, false religions, etc.; and, 2) on the other hand there is another kind of critique in which a new image of thought is developed out of a criticism of earlier modes of existence. (138) In the first type critique nothing happens, we discover the pitfalls of past mistakes, yet it does nothing to awaken bring about a fundamental change in people’s basic thinking, while the other does just the opposite: following those like Lucretius, Spinoza, and Nietzsche – this new form of critique explodes on the scene, totally volcanic. This form of critique is no longer purely negative but is fully positive, a creative act. (138)

Asked by the interviewer about his historical endeavors in Hume, Kant, Spinoza, Nietzsche, and others he describes the difference between the two critiques. In his work on Kant he outlined the “false critique”. He tells us he couldn’t very well just point out the fact that you disagreed with him, no what you do instead is discover the problems he poses and the machinery he uses to expose and resolve these problems. Others like Hume, Bergson, and Proust he found more congenial and in them he discovered elements of a new image of thought (139). As he states it:

There’s something extraordinary in the way they tell us: thinking means something else than what you believe (139).

As he tells us most of us go along perfectly satisfied with our worlds, our little corner of the universe, never questioning that we live in fictional worlds provided to us ready-made by our cultures. Then all of a sudden we come across certain thinkers: poets, artists, philosophers, etc. that describe for us another way of thinking, sensing, feeling, etc. Take Proust for instance he tells us:

Proust … has the idea that every thought is an aggression, appearing under the constraint of a sign, and that we think only when we are forced and constrained to think. From then on, thought is no longer carried on by a voluntary self, but by involuntary forces, the “effects” of machines… (139)

In this sense the poet, artist, philosopher, social critic, etc. have all become symptomologists: they search the world for signs of disease, signs of life, signs of a cure, signs of health (140). He reminds us that Nietzsche’s conception of the philosopher as physician of civilization, or Henry Miller, who Deleuze considered an “extraordinary diagnostician” (140). As he sees it:

The artist in general must treat the world as a symptom, and build his work not like a therapeutic, but in every case like a clinic. The artist is not outside the symptoms, but makes a work of art from them which sometimes serves to precipitate them, and sometimes to transform them. (140)

Just like the novelist uses character and persons to write novels, so the philosopher uses concepts, and the poets use tropes or figures of intellect and imagination. For Deleuze what we needed was both a new stylistics, and a new conceptuality: “What’s important here is this: where do concepts come from? What is the creation of concepts?” A concept exists no less than a character in a novel does. “In my opinion, what we need is a massive expenditure of concepts, an excess of concepts. You have to present concepts in philosophy as though you were writing a good detective novel: they must have a zone of presence, resolve the local situation, be in contact with the “dramas,” and bring a certain cruelty with them” (141). I would only add that poets create tropes galore, amazing tropes of mind and heart, intellect and imagination that both lyricize and dramatize the figures of our lives, thought, and world in touching and healing the earth and life on this planet. The Poet as healer and physician: as diviner, maker, and creator whose touch brings that light and darkness that heals all wounds. The poem as clinic within which poet and reader discover the symptoms of the world and how to transform them into health and life, rather than death.