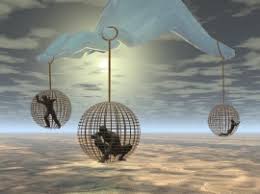 What, then, is the “Thing-in-itself” from a dialectical-materialist standpoint? The best way to answer this question is, again, to oppose dialectical materialism to Buddhism: in Buddhism, the In-itself is the void, nothing, and ordinary reality is a play of appearances. The question ultimately unanswered here is how we get from nothing to something. How do illusory appearances arise out of the void? The dialectical-materialist answer is: only if this something is less than nothing, the pre-ontological proto-reality of den. From within this proto-reality, our ordinary reality appears through the emergence of a subject which constitutes “objective reality”: every positive reality of Ones is already phenomenal, transcendentally constituted, “correlated” to a subject— in Badiou’s terms, every reality is that of a world defined by its transcendental coordinates.

How, then, do we pass from the In-itself of proto-reality to transcendentally constituted reality proper? Laruelle is right to point out that the In-itself is not “outside,” as an external Real independent of the transcendental field: in the couple subject and object, the In-itself is on the side of the subject, since there are (transcendentally constituted) objects (of “external reality”) because there is a split subject. This constitutive split of the subject (which precedes the split between subject and object) is the split between the void that “is” the subject ($) and the impossible-Real objectal counterpart of the subject, the purely virtual objet a. What we call “external reality” (as a consistent field of positively existing objects) arises through subtraction, that is, when something is subtracted from it— and this something is the objet a. The correlation between subject and object (objective reality) is thus sustained by the correlation between this same subject and its objectal correlate, the impossible-Real objet a, and this second correlation is of a totally different kind: it is a kind of negative correlation, an impossible link, a non-relationship, between two moments which can never meet within the same space (like subject and object), not because they are too far away, but because they are one and the same entity on the two sides of a Möbius band. This impossible-Real virtual object is not external to the symbolic, but its immanent impediment, what makes the symbolic space curved; more precisely, it “is” nothing but this curvature of the symbolic space.

But do we not get caught in a contradictory redoubling here: the Real is a gap in the order of Being (reality) and a gap in the symbolic order? The reason there is no contradiction is that “reality” is transcendentally constituted by the symbolic order, so that “the limits of my language are the limits of my world” (Wittgenstein). In the common transcendental view, there is some kind of Real-in-itself (like the Kantian Ding an sich) which is then formed or “constituted” into reality by the subject; due to the subject’s finitude, we cannot totalize reality, reality is irreducibly inconsistent, “antinomic,” and so forth— we cannot gain access to the Real, which remains transcendent. The gap or inconsistency thus concerns only our symbolically constituted reality, not the Real in itself. Lacan here takes a step strictly homologous to the move from Kant to Hegel with regard to antinomies and the Thing-in-itself: the Real is not the external In-itself that eludes the symbolic grasp, that the symbolic can only encircle in an inconsistent and antinomic way; the Real is nothing but the gap or antagonism that thwarts the symbolic from within— the symbolic touches the Real in a totally immanent way. We are thus led back to the key paradox of the Real: it is not simply the inaccessible In-itself, it is simultaneously the Thing-in-itself and the obstacle which prevents our access to the Thing-in-itself. Therein lies already the basic reflexive move of Christianity, as well as of the Hegelian dialectic: in Christianity, the very gap that separates a believer from God is what ensures his identity with God, since, in the figure of the abandoned Christ on the Cross, God is separated from himself; in Hegel, an epistemological obstacle becomes an ontological feature of the Thing itself (contradiction is not only an index of the imperfection of our knowledge, the limitation of our knowledge brings us in contact with the limitation of the Thing itself).

The Real is thus an effect of the symbolic, not in the sense of performativity, of the “symbolic construction of reality,” but in the totally different sense of a kind of ontological “collateral damage” of symbolic operations: the process of symbolization is inherently thwarted, doomed to fail, and the Real is this immanent failure of the symbolic. The circular temporality of the process of symbolization is crucial here: the Real is the effect of the failure of the symbolic to reach (not the In-itself, but) itself, to fully realize itself, but this failure occurs because the symbolic is thwarted in itself. It is in this sense that, for Lacan, the subject itself is an “answer of the Real”: a subject wants to say something, it fails, and this failure is the subject— a “subject of the signifier” is literally the result of the failure to become itself. In this sense, also, within the symbolic space, the effect is a reaction against its cause, while the cause is a retroactive effect of its cause: the subject produces signifiers which fail, and the subject qua Real is the effect of this failure.

from  Slavoj Zizek’s, Less Than Nothing:
Hegel and the Shadow of Dialectical Materialism

1 thought on “Slavoj Zizek: The Answer of the Real”