“All men by nature desire to know. An indication of this is the delight we take in our senses; for ever apart from their usefulness they are loved for themselves; and above all others the sense of sight… The reason is that this, most of all the sense, makes us know and brings to light many differences between things.”

“The west’s eye-intense pagan line begins in Egypt as does the hard persona of art and politics. Egypt created the distance between eye and object which is a hallmark of western philosophy and aesthetics. The distance is a charged force field, a dangerous temenos.” 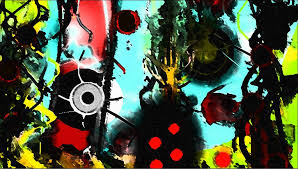 The problems of representationalism are with us still. Deleuze’s philosophy might well be caught up in this fatal flaw, enmeshed within a tributary Idealism, an Idealism that investigates the central problem-idea that has plagued philosophy since Plato: how to overcome this linkage between things and words, mind and world, subject and object. This link or gap between, the dualism or duel between things and their generative forces, powers, and intensities.

Is sight the disease of all Idealisms?  In their new work Dunham, Grant, and Watson tell us that if “we put together our view that idealism is realist in respect to Ideas with the argument that the philosophy of nature forms a crucial component of it, we arrive at a conception not of the two-worlds idealism beloved of interpretations of Plato, but of a one-world inflationary idealism.”1  Between the abstract universal and the concrete universal, between Plato and Hegel, the rift that is history of Idealism plays itself out:

“The concrete universal, or the whole determined by the particulars it generates and that differentiate it in turn, is the Idea exactly as Platonism conceived it: as the cause of the approximations of becomings to particular forms, and as the ‘setting into order of the universe’ (Ti, 53a) from disorder (ataxia), as organization. When idealism is presented as realism concerning the Idea, this means: first, that the Idea is causal in terms of organization; second, that this is an organization that is not formal or abstract in the separable sense, but rather concretely relates part to whole as the whole; and third, therefore that such an idealism is a one-world idealism that must, accordingly, take nature seriously” (8).

Gilles Deleuze interjected his own struggle within this history, stating, “Ideas are concrete universals in which extension and comprehension go together-not because they include variety or multiplicity in themselves, but because they include singularity in all its varieties” (DR, 176). 2  Henry Somers-hall in his new work on Deleuze tells us that Merleau-Ponty once recognized that two problems are enmeshed within the problematiques of the genesis of the existent world and of the genesis of the idealization performed by reflection: the problem of the emergence of the existent world and the problem of the emergence of reflection itself.3 Deleuze attempts to solve this problem by returning to a moment prior to the constitution of the subject and the object: a field of pure difference from which both representation and that which is to be represented emerge. Another philosopher, Karen Barad, working in another vein says that “…the pairing of constructivism with some form of antirealism has become nearly axiomatic: if we acknowledge the cultural specificity of scientific knowledge construction, are we not obligated to relinquish the hope of constructing theories that are true representations of independent reality?”4 This battle between representational models of reality and anti-representational systems of difference continue to plague the central issues within philosophical speculation.

Deleuze offers us the principle of immanence which is the idea that there is a unitary space of individuation in which all things are located. There is one and only one whole. This means that all individuals, relations, and the states of affairs these things compose, are to be understood in terms of their situation on this unitary plane of immanence. What are the condtions for such a field of pure difference? Henry Sommers-hall argues against reading into this a flat ontological or single plane of representation, or actuality, Deleuze puts forward instead the model of the stereoscopic image: “Stereoscopic images form no more than an even and flat opposition, but they depend upon something quite different: an arrangement of coexistent, tiered, mobile planes, a `disparateness’ within an original depth” (DR, 51). Here then, representation is seen as the result of a process, or rather as the result of creating an artificial difference between the process and the result (Ibid., Kindle Locations 3117-3120). Some scholars see in this the differentiation between Kant’s Ideas of reason and Deleuze’s conception of the “problem-idea”:

“Deleuze does not think that Kant goes nearly far enough… For Kant only the Ideas of Reason are interminable, but… the forms of intuition and the categories of the understanding are clear and well determined in advance of their application. For Deleuze, however, time, space, and concepts are all caught up in the indeterminability of the problem-idea. … Thus the Idea is not a cognitive mechanism of finite rational beings, but the genetic principle of all being. The infinite determinability of the Idea is not with respect just to the ‘concepts of experience’ but to every actual thing that exists. Hence Deleuze’s monistic claim that being is univocal” (Idealism, 286-287).

At the heart of this insistence is Deleuze’s focus on the unresolved and unresolvable tension between forces, powers, and “intensities” (Idealism, 287). Peter Wolfendale argues that this underpins Deleuze’s “metaphysics of the subrepresentational”.5 The forces are indeterminable for the simple reason that they have no relations from which to be determined. The identity of these forces emerge by way of their relations within a reciprocal determination. Out of these intensive relations flows emerge that are both plural and differentiating. These intensive flows move between disequilibrium and equilibrium without ever reaching some determinated or fixed point of relation.

Peter Wolfendale arguing against phenomenology tells us that the “metaphysics of flow in phenomenological terms is that their concerns can be easily dismissed as epiphenomenology by physicists. The reality of flow can only be addressed as something other than the experience of flow” (Ibid.). Instead Deleuze tells us that flow gives rise to actual qualities; that is, genesis is differentiation. Actual qualitative particular things are the outward manifestation of immanent intensive flows arising from these intensive differntia (Idealism, 287; Deleuze, 1983: 40-41).

What this all comes to is Deleuze’s conception of the univocity of Being as a two-aspect theory of virtual/actual, the actual being the outer manifestation of the virtual intensive intensity. There is no dichotomy or split but a univocal relation between the intensive and extensive aspects of ontic. As our historians claim “virtual intensities are genetically pre-individual, pre-objective, but ontologically rather than temporally. The virtual is always immanent to the actual; it is the latter’s immanent genetic element” (Idealism, 288-289).

As Peter Wolfendale states it what “breaks the analogy between time and space is that whereas there are many spaces, there is a unitary time common to them all. No Idea contains a time dimension, because it could not transforming the virtual back into the actual” (Ibid.). Nothing is resolvable because everything is generative of qualitative things that must return as for as there is something rather than nothing; for as long as there is being. It is this underlying process of intensive differentiation that theory is blind too; it is the unconscious of theory itself, and the blindness in theory that leads to the illusions of representation. (Idealism, 288).

It is against this false materialism of substantive dualism that Deleuze that leads to such representationist theories, and that reduces difference to the “identical” – difference as the difference between already established actualities – that he offers his own problematique.

Whenever we see an appearance, an already actual thing, an empirical object, what we are missing in this seeing is the whole complex network, field of forces, or intensive differences immanent to this entity, giving rise to its extensive and qualitative existence. Whitehead would have called this an account of the “societies” of actual occasions:

“Thus the actual world is built up of actual occasions; and by the ontological principle whatever things there are in any sense of ‘existence,’ are derived by abstraction from actual occasions. I shall use the term ‘event’ in the more general sense of a nexus of actual occasions, inter-related in some determinate fashion in one extensive quantum. An actual occasion is the limiting type of an event with only one member” (PR, 73).7

There is no ground to things, there is only the unground of intensity, and this intensity is quantitative: it includes quantities such as temperature, density, pressure, electrical potential, gravitational potential, and so on (Idealism, 289). Actual entities stand out against this background of intensity. There is no total system, no Absolute. There is instead a “chaotic intensive maelstrom” which is productive of actual entities that arise out of this maelstrom for a short span then vanish back into its intensities.

What Deleuze seeks is the transcendental condtions of the sensible, to describe the underlying forces, powers, and intensities that hide within the virtual. Iain Hamilton Grant and his team tells us that since these processes are in the realm of Deleuze’s problem-idea then this is an empiricism of the Idea. Empiricism becomes transcendental when it engages with the Idea (Idealism, 292).

The straneness of this transcendental empiricism from which many New Materialists (DeLanda, Braidotta, et. al.) draw their materialisms is that it may show us that materialism itself seems to be undergoing a metamorphosis; one yet to be decided. For what our historians of Idealism discover in Deleuze is a rearticulation of a Spinozist ethics as always already constituted by the very forces, powers, and intensities that generate our world:

“Deleuze’s metaphysics satisfies the ampliative or inclusivists stakes idealist philosophy set itself since Plato, rearticulating rather than eliminating ethics in accordance with nature, but both in accordance with the problem-idea” (Idealism, 293).

If this is true then what does that portend for this so called New Materialism? Is it even a materialism, or rather just another form of Idealism? If we are to call ourselves materialists then we will need a more stringent and elaborated theory of difference and relations. We will need to dig deeper into the dark loam of our philosophical and speculative heritage than we have so far, to rout out the Idea in all its clever hiding places, and begin to appraise just what New Materialism really is. The skeptic in me begins to wonder… As Ray Brassier sums it up, “For Deleuze… being is nothing apart from its expression in thought; indeed, it simply is this expression” (203).8 This is Deleuze’s Idealism.