Sometimes I have to just put things down and reread my Faulkner. On my best days I’d like to think I’ve escaped my southern heritage, but I know it’d be a lie. No one can actually escape such a sordid world, one can only remember it and work through the corruption and taint of its bitter history, not through some nostalgic bit of fantasy, but rather through opening one’s eyes and peering into the darkness and abyss of that world without flinching. Having lived in Texas, Louisiana, and Mississippi back in those early years we like to forget: childhood, the stench of racism, bigotry, small minds – that whole gamut of, as Hemingway hated to say, Men-without-women – misogynists, one and all, who seem to pervade our literature as they do our real and imaginary lives like dead flies that keep resurrecting their ugly life reminding you that nothing stays buried forever. We have to face it as part of what is there, a part of a retroactive education in the grotesque and macabre Gothicism that tweaks us back into our present, not changed but rather stamped and molded by its dark river of images. As Faulkner himself once said:

“Because it is himself that the Southerner is writing about, not about his environment: who has, figuratively speaking, taken the artist in him in one hand and his milieu in the other and thrust the one into the other like a clawing and spitting cat into a croker sack. And he writes. We have never got and probably will never get, anywhere with music or the plastic forms. We need to talk, to tell, since oratory is our heritage. We seem to try in the simple furious breathing (or writing) span of the individual to draw a savage indictment of the contemporary scene or to escape from it into a make believe region of swords and magnolias and mockingbirds which perhaps never existed anywhere. Both of the courses are rooted in sentiment; perhaps the ones who write savagely and bitterly of the incest in clay floored cabins are the most sentimental. Anyway, each course is a matter of violent partisanship, in which the writer unconsciously writes into every line and phrase his violent despairs and rages and frustrations or his violent prophesies of still more violent hopes. That cold intellect which can write with calm and complete detachment and gusto of its contemporary scene is not among us; I do not believe there lives the Southern writer who can say without lying that writing is any fun to him. Perhaps we do not want it to be.”

-William Faulkner, His Intro to The Sound and the Fury

Nothing about our heritage is fun, but if we don’t face it we will continue living it and suffering all those fools that keep repeating its mistakes. Maybe that’s why we need to reread our Hawthorne’s, Melville’s, James’s, Twain’s, Faulkner’s… not because it gives us pleasure, but because the pain of its dark truths awakens in us that desire not to repeat that past, but to change our lives in such a way as not to sink into its abyss. The southern writer is passionate and full of bluster, rather than that “cold intellect which can write with calm and complete detachment,” and writes as if the very pen in his hands were ablaze with the fierce truth that hides in the blood like some gothic tale better left in the silence of dead worlds. Yet, writes he does with all the verve and oratory of an ancient sophist expounding on the way of things and people that live in the hollows of swamps and villages, along the broken trails of back woods and muddy rivers where the music of a fiddlist plays into the wee hours of the morn, and men and women fall into that mad world of sex and death: make love and die, rage and dream, bless and curse. People who live by the Good Book even if they no longer believe in its God.

Healers, prophets, madmen, jokers… the sordid lot of con men who seem to sale you the moon, and hand you the keys to hell in a hand basket. Men whose smiles could bring you comfort and peace, and at the same time shake you down for every penny you have left. Men who with a straight face tell a woman how beautiful they are and with their eyes commoditize each thread on her body as if everything was made of gold. A world where words still have weight and solidity and you’d better be able to back them up with your fists not your lies. Working men who spend everyday scraping together a life for their own and who protect their own to the death if need be. Men who don’t give a shit about intellectual bullshit or educated idiots but rather if you can actually do something with your hands not your mind; cunning men who live by tongue and hand pragmatic intelligence. They respect the mind but only after you’ve proved yourself to be a man among men. This is a world of status and clannish ways of being where appearance is reality and people don’t hide behind masks but stand before you unmasked in their savage glory. A violent and world where people love deeply and hate just as … deeply. This is the world where a man will give you the shirt off his back if you need it, and want expect repayment; only that you live up to what it is you are and can be. Yet, if you cross the unwritten line watch out. Nothing in hell could stop a man from unleashing his fury if you’ve harmed are even threatened to harm his loved ones. He doesn’t give a shit about himself, but threaten what he loves and he’ll kill you; or, at least make you wish you’d been killed. (Of course in this day of legality such a world is part of a shadowed distemper of its ancient heritage.)

And, yet, there is life here, life like it isn’t in those great cities of death around the world. Here are people who give a shit about themselves and each other, who still hold onto certain tried and true ways of the earth. Pain is central for sure: blood, sweat, and tears always a part of it. Humor and laughter are here, too. But there is something else, a sense of being part of something, a sense of community, of family, of all those others you share this sweet earth with – ties to the land that encompasses us around about. Might not mean much to most people but it’s there nonetheless. All the clichés aside the southerner lives a separate life and really doesn’t give a shit what the rest of the planet thinks as long as they don’t enforce or impinge on their right to live they way they see fit and be left alone. What they hate is Big Brother Federal government imposing its ethical and legal crapology: it’s neoliberal way of life on people who don’t take kindly to it. It stirs them up, pisses them off, makes them do things maybe they shouldn’t, and generally get in trouble for their efforts. Southerners just want to live and let live, and most of all to live it without someone setting traps for them, telling them how to raise their kids, how to talk, how to vote, and – how they should live their lives… people down south go to church or the bar where they can be among there own, untroubled by those fools who would take their way of life away. Don’t even go there…

I mean you can take a gander at the list below and see what makes a southerner tick. Do you have a favorite southern book or author? Add it to the comment list and I’ll add it below: 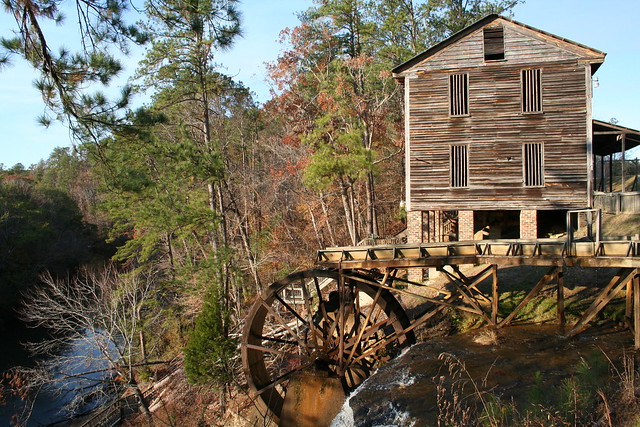 Some days seem to be Faulkner days, moments when the forlornness of things, the vastation and desolation surrounding us suddenly juts its old head up and one is reminded of the darkness in the plummeting fold of the universe. Even when describing the mundane worlds of machinery he brings a sense of the decay and death of things, of the ruination toward which all things in this bright universe tend:

But some of the machinery would be left, since new pieces could always be bought on the installment plan— gaunt, staring, motionless wheels rising from mounds of brick rubble and ragged weeds with a quality profoundly astonishing, and gutted boilers lifting their rusting and unsmoking stacks with an air stubborn, baffled and bemused upon a stumppocked scene of profound and peaceful desolation, unplowed, untitled, gutting slowly into red and choked ravines beneath the long quiet rains of autumn and the galloping fury of vernal equinoxes .