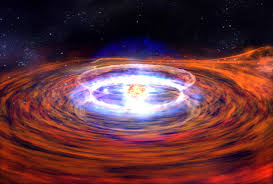 Ever wonder how stupid our government is? I do all the time. Take plasma fusion for instance. The science underpinning much of fusion energy research is plasma physics. Plasmas—the fourth state of matter—are hot gases, hot enough that electrons have been knocked free of atomic nuclei, forming an ensemble of ions and electrons that can conduct electrical currents and can respond to electric and magnetic fields. The science of plasmas is elegant, far-reaching, and impactful. Comprising over 99% of the visible universe, plasmas are also pervasive. It is the state of matter of the sun’s center, corona, and solar flares. Plasma dynamics are at the heart of the extraordinary formation of galactic jets and accretion of stellar material around black holes. On earth it is the stuff of lightning and flames. Plasma physics describes the processes giving rise to the aurora that gently illuminates the far northern and southern nighttime skies. Practical applications of plasmas are found in various forms of lighting and semiconductor manufacturing, and of course plasma televisions.

University of Missouri engineer Randy Curry and his team have developed a method of creating and controlling plasma that could revolutionize American energy generation and storage. Besides liquid, gas and solid, matter has a fourth state, known as plasma. Fire and lightning are familiar forms of plasma. Life on Earth depends on the energy emitted by plasma produced during fusion reactions within the sun. However, Curry warns that without federal funding of basic research, America will lose the race to develop new plasma energy technologies. The basic research program was originally funded by the Office of Naval Research, but continued research has been funded by MU.

The difference between these multibillion dollar programs and the one offered by the University of Missouri is that physicists usually rely on electromagnetic magnetic fields to harness the power of plasma, the fourth state of matter, in fusion power experiments. But University of Missouri researchers have managed to create rings of plasma that can hold their shape without the use of outside electromagnetic fields—possibly paving the way for a new age of practical fusion power and leading to the creation of new energy storage devices.

The researchers created plasma rings about 15 centimeters in diameter that flew through the air across distances up to 60 centimeters. The rings lasted just 10 milliseconds, but reached temperatures greater than the sun’s fiery fusion core surface at around 6600 to 7700 degrees K (6327 to 7427 degrees C). Plasma physicists suspect that magnetic fields are still involved—but that the plasma rings create their own.

“This plasma has a self-confining magnetic field,” said Randy Curry, an engineer and physicist at the University of Missouri in Columbia. “If one can generate and contain it without large magnets involved, of course fusion energy would be an application.” But the researchers’ success in creating self-contained plasma rings came as a surprise. “We did not expect that,” Curry says.

The plasma device at MU could be enlarged to handle much larger amounts of energy, according to Curry. With sufficient funding, they could develop a system within three to five years that would also be considerably smaller. He noted that they used old technologies to build the current prototype of the plasma-generating machine. Using newer, miniaturized parts, he suggests they could shrink the device to the size of a bread box

According to Science President Barack Obama last week submitted a $3.8 trillion budget request to Congress for 2014 that, if enacted, would boost the research budgets of nearly every federal agency. His continued support for science stands out in an otherwise flat budget that aims to shrink the federal deficit by clamping down on entitlement programs and raising money by revising the tax code. The president’s spending blueprint should lift the spirits of a community that, along with all other sectors of the economy, has endured a bumpy political ride for the past year. The president’s $143 billion request for research and development more than erases a nearly $10 billion dip from 2012 to 2013 caused by sequestration—the $85 billion, across-the-board cut in discretionary spending that went into effect in March.

With such breakthroughs as the University of Missouri team is working with one sees just the opposite in both Europe and United States projects using large fusion reactors based on magnetic coils that are over budgeted an continue to cost taxpayers and governments more money than projected. At Joint European Torus (JET), where Euratom is investigating the possibility of recasting JET as an international facility after 2018, asking the other six ITER partners—China, India,    Japan, Russia, South Korea, and the United States—to contribute to the cost of keeping it running. But with ITER already expected to cost several times    the original estimate, the partners may not be keen to shoulder the extra burden. (here)

So if Randy Clark of the University of Missouri and his team can produce plasma fusion that does not need magnetic coils why should we continue funding such large Manhattan style projects as JET and our own Max Planck reactors? “This plasma has a self-confining magnetic field” said Randy Clark: if this is true (see video here) then the cost of maintaining such large fusion reactors would be a thing of the past. What’s interesting is that if the International Community could get behind such projects we could truly have energy for the world that would be clean and safe, because unlike the older forms had waste products while this form does not and is self-renewable. Let’s hope within the next ten years they can make solid headway toward this goal.