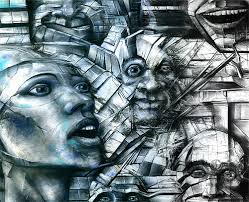 “What would happen to our thinking about politics if we took more seriously the idea that technological and natural materialities were themselves actors alongside and within us – were vitalities, trajectories, and powers irreducible to the meanings, intentions, or symbolic values humans invest in them?”    – Jane Bennett Jane Bennett represents one of the new breed of materialists that seek a vision of a speculative philosophy that exists somewhere between a Rube Goldberg complexification of reality, and one that crosses over into the darker world of J.G. Ballard’s vision of excess and abject or aleatory wonder (i.e., think of The Crystal World, Crash, Millennium People, etc.). This new vision of materialism “would not be radically new, but part ad hoc invention and part a gathering of elements from preexisting traditions”, yet with a quirky twist: it would no longer follow the old Cartesian-Newtonian sleepworld of passively resistant or inert matter, but would enter the age of modern string theory and quantum physics where material objects are seen within a dynamic field of vital “thing-power” – where the boundaries that separate life from matter, organic from inorganic, human from nonhuman, man from god, are “not necessarily the most important ones to honor” (NM: 47). [1] The litany of philosophers in that tradition are represented by Epicurus, Lucretius, Hobbes, Spinoza, La Mettrie, Diderot, Marx (dissertation on Democritus), Althusser (aleatory materialism), Deleuze… as well as, the material vitalists, especially in its non-naive form of critical or modern vitalism, which endeavored to engage experimental science and “fought doggedly against one kind of materialism” – mechanistic or deterministic materialism in its post-Cartesian mode (NM: 48).

Those critical vitalists she aligns herself with are Hans Driesch and Henri Bergson for whom life is irreducible to matter, and that there is a life-principle that animates matter, exists only when in a relationship with matter, but is not itself of a material nature (NM: 47-48). The vitalists squabbled and bickered amongst themselves about how this new vital force should be depicted, whether Bergson’s elan vital or Driesch’s entelechy should win the day, yet both agreed, along with their opponents, the materialists, that matter “was unfree, mechanistic, and deterministic (though “dynamic” in the sense of capable of undergoing regular changes of state)” (NM: 49).

Driesch made a bow toward the mechanistic materialists insisting that the “vital principle” has “no existence independent of the physico-chemical matter” (NM: 48-49). For Driesch there is a thin line, or firewall, a buffer between matter and life that is so close, yet so far that Bennett tells us that she is intrigued because “he pushes the lifematter binary to the limit, although, at the last minute, he draws back from taking the plunge into a materiality that is itself vibrant or active” (NM: 49).