UP TO NOW, it has been one of the principal tenets of the critical theory of society (and particularly Marxian theory) to refrain from what might be reasonably called utopian speculation.

– Herbert Marcuse, An Essay on Liberation 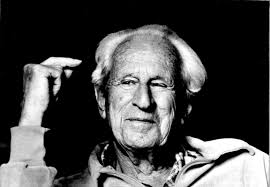 Emerson once remarked that Americans lived in the ‘optative mood’ – The Transcendentalist (1842):

Our American literature and spiritual history are, we confess, in the optative mood; but whoso knows these seething brains, these admirable radicals, these unsocial worshippers, these talkers who talk the sun and moon away, will believe that this heresy cannot pass away without leaving its mark.

Marcuse, a child of Marxian thought,  and native of Germany could have agreed with Emerson up to a point, but would have added only the communist dictum of Marx himself that the optative mood of communism is “the real movement which abolishes the present state of things. The conditions of this movement result from the premises now in existence.” What Marcuse did say in his Essay on Liberation is that “what is denounced as “utopian” is no longer that which has “no place” and cannot have any place in the historical universe, but rather that which is blocked from coming about by the power of the established societies.”1

So it was the repressive/oppressive regimes of both the liberal and socialist states of his era that he saw as the problem that was causing a blockage to all those creative potentials that needed to be released through utopian realization. As he put it “the question is no longer: how can the individual satisfy his own needs without hurting others, but rather: how can he satisfy his needs without hurting himself, without reproducing, through his aspirations and satisfactions, his dependence on an exploitative apparatus which, in satisfying his needs, perpetuates his servitude?” (KL 69-71) That Marcuse was correct in his diagnoses but incorrect in the treatment is old hat. He saw that we needed a new direction, and new institutions and relationships of production, ones that would express the ascent of needs and satisfactions very different from and even antagonistic to those prevalent in the exploitative societies. Yet, he based his criteria on a malformed notion of ‘instincts’ and their liberation:

Such a change would constitute the instinctual basis for freedom which the long history of class society has blocked. Freedom would become the environment of an organism which is no longer capable of adapting to the competitive performances required for well-being under domination, no longer capable of tolerating the aggressiveness, brutality, and ugliness of the established way of life.(KL 74-77).