” I think what you wrote is an exclamation of triumph. You had lived out your passion to travel far, to discover and embrace novel styles of visual art, to ask the questions in a new way, and from all that create an authentically original work. In this sense your career is one for the ages; it was not paid out in vain. In our own time, by bringing rational analysis and art together and joining science and humanities in partnership, we have drawn closer to the answers you sought…”

“What would an OOO critique of Wilson look like, then? What alternative, maybe better, understandings of evolution and climate change could OOO give us?” 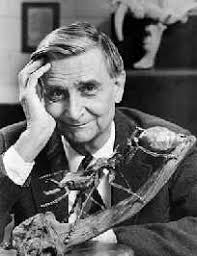 In a post on environmental critique Randall Honold related an outburst he’d made in a recent meeting in which E.O. Wilson’s new work, The Social Conquest of Earth, was discussed, saying: “The problem with Wilson is he’s an unrepentant epistemologist!” Is he? When Wilson says this about consciousness and it’s pretensions: “Consciousness, having evolved over millions of years of life-and-death struggle, and moreover because of that struggle, was not designed for self-examination. It was designed for survival and reproduction. Conscious thought is driven by emotion; to the purpose of survival and reproduction, it is ultimately and wholly committed” (SCE 203-207 KL*). Yes, I will agree that Wilson is an affirmer of Science above other forms of knowledge, and Wilson is no lover of philosophy and sees in it part of the problem not the solution. That Wilson supports a unrepentant form of scienctific humanism, and sponsors a return to the purity of Reason and a New Enlightenment does this lead us to his underlying epistemology? If not then what does? Let’s find out….

Wilson’s approach is to bring together the best we have in both science and the humanities. A sort of Sellarsian move of bringing the manifest and scientific images together in a unified picture of the universe and our place in it. He believes we are tottering on the edge of economic, climatic, social, and planetary collapse. To solve the problems we face he tells us we will need to bring together information from multiple disciplines, ranging from molecular genetics, neuroscience, and evolutionary biology to archaeology, ecology, social psychology, and history (SCE 230-231). I would only add art and philosophy, and even, love, into the mix. For Wilson the Church of Science holds the Truth, and is the keeper of Knowledge. Yet, for many of us Science has no corner on truth, it is no monlithic tower of knowledge dictating to the rest of the world the one true version of the Gospel of Truth. Science is only one of many conditions of philosophy as Badiou has stated over and over.

Scientists are not guileless observers, patiently recording the facts that nature places before them, but crafty cultural operators, manipulating vast technical resources to precipitate artificial new phenomena, and then networking like mad, through the production, distribution and exchange of masses of words, diagrams and statistics. They negotiate, in short, not with the objective world but with each other. As Johnathan Ree remarked recently “the norms of science, like those of morality or politics, are ideals rather than realities, and pointing out that we do not always live up to them is not the same as telling us to stop trying.” (Johnathan Ree: The Cult of Science) Paul Feyerbend in his book, The Tyranny of Science, once argued that science refers not to a single entity, but rather to a complex and ever-changing array of practice, theories, values and institutions. Therefore to speak of science in the singular, let alone to describe it as tyrannous is a category error. 2 In other words there is no monlithic substance or object we can call science, there are instead an interrelated set of disciplines and practices, a network of programs, institutions, and learning processes and methods that are all related within an epistemic framework of knowledge we call the sciences.