It was Schopenhauer who claimed that music brings us into contact with the Ding an sich: it renders directly the drive of the life substance that words can only signify. For that reason, music “seizes” the subject in the Real of his or her being, by-passing the detour of meaning: in music, we hear what we cannot see, the vibrating life force beneath the flow of Vorstellungen. But what happens when this flux of life substance is itself suspended, discontinued? At this point, an image emerges, an image that stands for absolute death, for death beyond the cycle of death and rebirth, corruption and generation. Far more horrifying than to see with our ears— to hear the vibrating life substance beyond visual representation, this blind spot in the field of the visible— is to hear with our eyes, to see the absolute silence that marks the suspension of life, as in Caravaggio’s Testa di Medusa: is not the scream of the Medusa by definition silent, “stuck in the throat,” and does not this painting provide an image of the moment at which the voice fails?

– Slavoj Zizek,  Less Than Nothing: Hegel and the Shadow of Dialectical Materialism

We have an interval, and then our place knows us no more. Some spend this interval in listlessness, some in high passions, the wisest, at least among “the children of this world,” in art and song. For our one chance lies in expanding that interval, in getting as many pulsations as possible into the given time. Great passions may give us this quickened sense of life, ecstasy and sorrow of love, the various forms of enthusiastic activity, disinterested or otherwise, which come naturally to many of us. Only be sure it is passion–that it does yield you this fruit of a quickened, multiplied consciousness.  Of such wisdom, the poetic passion, the desire of beauty, the love of art for its own sake, has most. For art comes to you proposing frankly to give nothing but the highest quality to your moments as they pass, and simply for those moments’ sake.

– Walter Pater, The Renaissance: Studies In Art And Poetry 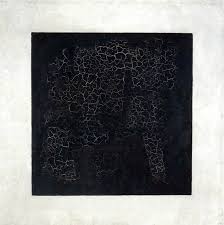 One analogy that seems particularly striking could be drawn between Nietzsche and Kazimir Malevich. Indeed, I am tempted to suggest that, at least to a certain extent, Nietzsche is to philosophy what Malevich is to art. “So far, artists have only been portraying, or representing, the world and its objects in different ways, but the time has come for us to create something in this world” – this is how one could express Malevich’s motto. He declares his Black Square to be the first new form that was ever created, the first artistic creation in the strong meaning of the word: it is nothing less than the “birth of the painting-surface.” A painting-surface or a “plane” is not an object that could be found anywhere in the world (and then reproduced or represented in a painting); it exists only as a painting. This is not to say that the painting represents some imaginary fantasy-object that exists nowhere in reality, only in the fictive domain of the painting. On the contrary, Black Square introduces a new object in reality, this new object being precisely the painting-surface as object. A painting such as Black Square is the very materiality of the painting-surface. Therefore, “any painting-surface is more alive than any face from which a pair of eyes and a grin jut out,”‘ and Suprematism is “the beginning of a new culture.” In relation to Malevich, one should stress that his project was far from being simply abstractionist; it was not about purifying the world of images or representations up to the point where nothing is left but its pure form. Rather, his project was to create a form that could count as the first “content” or object created by painting from within its own practice-the “painting-surface” or “plane” being, according to Malevich, precisely this: namely, a painterly object par excellence.

from Alenka Zupancic’s:
The Shortest Shadow:
Nietzsche’s Philosophy of the Two

Is this the thing itself immanently registering its movement on the plane of the painterly surface as it rises from the gap as an Object replete with all its objecthood intact as the subjectal manifestation of the ‘plane of immanence’? Or is this nothing less than the geometry of the Void? Maybe this is the gap itself that gives rise to suture, the ontological crack that cuts through reality itself: because we cannot take in the whole of reality we are blinded by its immensity, situated within its dark concavity where we continuously fill it with a sea of fantasy… but even as our gaze penetrates the black darkness of this object we discover that we are falling into our own abyss of subjectivity rather than the Real, caught between sex and death we become destitute of the illusions that have sustained us and suddenly astonished we grasp for the first and last time the jouissance of life.

“Political spaces in Palestine are not defined by legal zones, but operate through legal voids.”                 – Decolonizing Architecture Art Residency, The first U.S. Exhibition

Imagine an imaginary Maginot line as thin as a quark, yet as adamant as the Wall of China, that situates itself as an impossible void, a rupture within the very fabric of space and time that rises along the frayed edge of the war-torn and conflict-ridden region of Palestine like the invisible scar of a dead god.

We learn from DAAR(Decolinzing Architecture Art Residency) that a politics of decolonization, which “implies the dismantling of the existing dominant structure — financial, military, and legal — conceived for the benefit of a single national-ethnic group, and engaging a struggle for justice and equality” is a much needed respite from the harsh politics of despair that reigns in the region. This architectural project “does not articulate a utopia of ultimate satisfaction. Its starting point is not a resolution of the conflict and the just fulfilment of all Palestinian claims; also, the project is not, and should not be thought of, in terms of a solution. Rather it is mobilizing architecture as a tactical tool within the unfolding struggle for Palestine. It seeks to employ tactical physical interventions to open a possible horizon for further transformations” (DAAR: About).