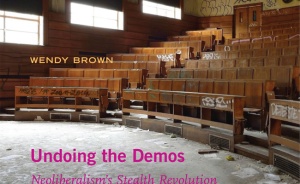 Interesting interview with Wendy Brown author of Undoing the Demos: “I treat neoliberalism as a governing rationality through which everything is “economized” and in a very specific way: human beings become market actors and nothing but, every field of activity is seen as a market, and every entity (whether public or private, whether person, business, or state) is governed as a firm.” she says.

Read it on Dissent: Interview by Tom Shenk with Wendy Brown What Exactly is Neoliberalism?

“It’s getting harder to find people to work on farms in the US – robo-farmers are shifting plants and could soon be picking strawberries in their place…”
– Harvey, the robot farmer fixing the US labour shortage (New Scientist)

With Cow-Milking Robots taking over conglomerate farms like Bordens, where even the cows enjoy the new automated systems and seem happier and more contented, one wonders why it took so long. I mean, we don’t need humans anymore for this manual labor now do we? All those people can find other jobs now can’t they?

Derek Thomson tells that “machines and technology have been replacing our jobs for about as long as the concept of a “job” has existed. In the early 1800s, British textile workers called the Luddites launched a series of massive protests against fancy new spinning machines and looms. They had a point. These machines worked better than people worked alone. They did steal jobs. But eventually, these dreaded machines and the rest of the industrial revolution made the vast majority of workers much richer by making us all more productive.” And, now he says: “But since machines are starting to take over not just farm jobs and factory jobs, but also white-collar professions, there’s a spookier question. What happens if machines can do so many jobs that we just run out of work? What if software eats the legal industry? What if robots start doing the work of doctors? What if they start cooking and serving all the food in restaurants? And driving all of our cars? And stocking all of our warehouses? And manning all of our retail floors? Today we can comfort ourselves with the knowledge that robots are really good at repetitive tasks and we’re really good at managing them. But what if artificial intelligence rises to the point that robots are better at managing robots?”

In a recent survey on nbcnews.com they line it up with nine jobs that will slowly replace humans in the near future:  pharmacists, lawyers and paralegals, drivers, astronauts, store clerks, soldiers,  babysitters, rescuers, sportswriters and other reporters. Quite a list don’t you think. Well, yes might finally get some neutral news at a last, huh? And, all those money-grubbing legal fees from bumkin lawyers will now go to feeding the bot. But what about that friendly sixteen year old needing extra case for school lunches and dates: we going to let a metal can take their place? Not I said the cracker.

Andrew McAfee of MIT co-author of The Second Machine Age: Work, Progress, and Prosperity in a Time of Brilliant Technologies with Erik Brynjolfsson tells us (see here) the near future holds three basic scenarios for such a takeover: scenario one is that it is going to hit the economy, and it might take a while to work itself out, but in the end we will reach a happy equilibrium; scenario two is that we see successive waves: artificial intelligence, automated driving that will impact people who drive for a living, robotics that will impact manufacturing:  scenario two happens, the problem is a bit worse because it will be difficult for the economy to keep adjusting and for workers to keep retraining; and, scenario three is that we finally transition into this science-fiction economy, where you just don’t need a lot of labor.

That last scenario sounds a lot like Marx’s original option: “Labor equals exploitation: This is the logical prerequisite and historical result of capitalist civilization. From here there is no point of return. Workers have no time for the dignity of labor.” (see Struggle Against Labor) But one wonders: Will there come a day when our progeny the Robots will demand the same?

The rhetoric of competitiveness seemed to serve a crucial function in winning certain moral and political arguments, on behalf of economic elites, and I wanted to understand how and why.

– William Davies, The Limits of Neoliberalism: Authority, Sovereignty and the Logic of Competition

Began reading William Davies new book The Limits of Neoliberalism: Authority, Sovereignty and the Logic of Competition in which he tackles a couple of themes: the first, concerning the question of uncertainty that plays a central role in the neoliberal vision of society and economics; and, second, the concerns of state: – What are the rationality and authority of the neoliberal state? What are they based on? Are they constituted by a careful, economizing logic, in which waste is monitored, productivity optimized, and agents carefully regulated? Or is this a more excessive, violent force, that transcends any economic or evaluative logic?

Before I began reading decided to do a little cataloguing of the experts he relied on in the bibliography. Was able to discover the usual suspects, such economists and authors like Angus Burgin (The Great Persuasion: Reinventing Free Markets since the Depression), Philip Mirowski (The Road from Mont Pelerin: The Making of the Neoliberal Thought Collective), and Daniel Stedman Jones (Masters of the Universe: Hayek, Friedman, and the Birth of Neoliberal Politics). There were many others recognizable from the differing political spectrums as well: Agamben (State of the Exception), S.M. Amadae (Rationalizing Capitalist Democracy: The Cold War Origins of Rational Choice), etc., the list could go on… The point of this exercise is a truism: that authors begin to refer to each other and the supposed truths that emerge become self-reinforcing over time, allowing for a legitimation that may or may not be deserving. Always need to be aware of this discursive looping as the expert treadmill weaves and unweaves in the academic climate of opinion and doxa. Beyond that let’s take a peak at where he’s taking us in this critique.

Obviously like many other authors he centers his discourse around Friedrich von Hayek who he tells us produced a “model of political economy that incorporated uncertainty at its heart, but nevertheless elevated certain types of expertise and government as the guarantors of that uncertainty”.1 Back in the 1930’s an economist Oskar Lange had written a book Economic Theory of Socialism which supported an equilibrium theory based on Walrasian general equilibrium theory, which purports the notion we should convert the whole economy using a “bottom-up” approach, starting with individual markets and agents. Whereas, macroeconomics, as developed by the Keynesian economists, focused on a “top-down” approach, where the analysis starts with larger aggregates, the “big picture”. Therefore, general equilibrium theory has traditionally been classified as part of microeconomics. Without going into the complex details of the mathematical theorems itself what we discovered after it was introduced is the fact that like many economic theories it first came out of Vienna, Austria. It was there that such anti-socialist thinkers and economists as Ludwig von Mises would attack any notion of central planning and a mathematically centered view of economics. Hayek would later take many of Mises ideas and as early as 1935 argue against the Walrasian model of central planning and mathematical certainty, saying, “the mere assembly of these data” needed to prosecute the calculation “is a task beyond human capacity”; but moreover, “every one of these decisions would have to be based on a solution of an equal number of simultaneous differential equations, a task which, with any of the means known at the present [1935], could not be carried out in a lifetime.”2

We can see here in these debates about the use and abuse of mathematics the seeds that would later spawn the need and desire for computing machines that could tackle these massive equations. But all that would come during the 50’s of which Mirowski documents in his thick book Machine Dreams – Economics Becomes A Cyborg Science. So no need to go there for the moment. To bring us back to Davies new work what he tells us about Hayek and neoliberalism is that they would – against such social engineers as Oskar Lange and even Keynes produce a model of political economy that incorporated uncertainty at its heart, but nevertheless elevated certain types of expertise and government as the guarantors of that uncertainty (KL 163).

As for the rationality and authority of the State problematique within neoliberalism that is the central issue of Davies second theme he has this to say:

Sovereignty, in the sense of an immeasurable and ‘ultimate power’, is wedded to economics of various forms and in various ways. Legal and executive power blend with forms of economic rationality, in an unwieldy balance between the immeasurable and the measurable. Procedures of measurement take on a quasi-sovereign authority…. The sovereign-economic ambivalence of the neoliberal state is one of the key lessons of the financial crisis – it transpired that this state’s economically rational role is to offer an irrationally large guarantee to maintain the status quo. (KL 176)

All this sets the stage for his book. As he tells us this book is descriptive and historical, and not an explicitly critical work. “Given the historical moment, this will disappoint some”, readers, he tells us. “But I would suggest that we need to understand how power works, how it achieves authority , and the role of economics (and business strategy) in facilitating this”.

The metaphysical discourses of moral and political philosophy do not, from a pragmatist perspective, actually succeed in grasping that which they refer to (such as authority, fairness, virtue), but they make sense in spite of this. By contrast, the empiricist discourses of the social sciences (and associated forms of management, statistics and governance of populations) seek to operate purely at the level of the sensible, the physical and the measurable. But they must also offer reasons how and why to do so, which draw them into moral appeals, which extend beyond the limits of the empirical.(KL 468-472)

I have yet to complete my reading of it, so this is more or less just a teaser. Yet, it seems to have some viable and critical appraisals of this whole history and some possible solutions going forward. I am disappointed that it is strictly aligned with historical analysis without offering some kind of tentative solutions, but I’ll assume that this will come in the future as he continues his investigations down the line. I’ll need to finish it this week and return with an updated report.