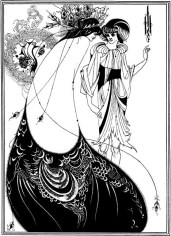 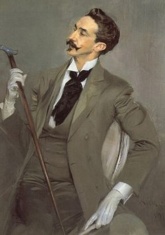 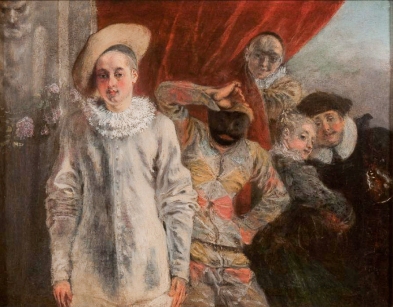 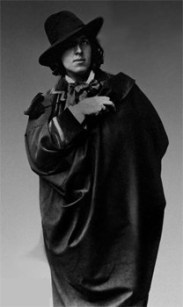 No one was more reproachful than he of a pose, a “cassure,” to use a vulgar word which exactly expresses our thought, whether in a dandy or in a voyour, in a great lady or in a daughter of the people. He possessed in a rare degree the sense of modern corruptions, in high as in low society, and he also culled, under the form of sketches, his flowers of evil.

Here is a description by Théophile Gautier in his biography or monogram of his young protégé, Charles Baudelaire:

His appearance was striking: he had closely shaved hair of a rich black, which fell over a forehead of extraordinary whiteness, giving his head the appearance of a Saracen helmet. His eyes, colored like tobacco of Spain, had great depth and spirituality about them, and a certain penetration which was, perhaps, a little too insistent. As to the mouth, in which the teeth were white and perfect, it was seen under a slight and silky moustache which screened its contours. The mobile curves, voluptuous and ironical as the lips in a face painted by Leonardo da Vinci, the nose, fine and delicate, somewhat curved, with quivering nostrils, seemed ever to be scenting vague perfumes. A large dimple accentuated the chin, like the finishing touch of a sculptor’s chisel on a statue; the cheeks, carefully shaved, with vermilion tints on the cheek-bones; the neck, of almost feminine elegance and whiteness, showed plainly, as the collar of his shirt was turned down with a Madras cravat.

His clothing consisted of a paletot of shining black cloth, nut-colored trousers, white stockings, and patent leather shoes; the whole fastidiously correct, with a stamp of almost English simplicity, intentionally adopted to distinguish himself from the artistic folk with the soft felt hats, the velvet waistcoats, red jackets, and strong, disheveled beards. Nothing was too new or elaborate about him. Charles Baudelaire indulged in a certain dandyism, but he would do anything to take from his things the “Sunday clothes” appearance so dear and important to the Philistine, but so disagreeable to the true gentleman.1

END_OF_DOCUMENT_TOKEN_TO_BE_REPLACED

Arnold Bocklin, Isle of the Dead

Now you’re ready for a long and strange trip. The steam is whistling, the sails are billowing in the right direction, and, unlike most travelers, you have the odd advantage of ignorance as to your destination. This is how you wanted it: vive la fatalité!

Waste, decay, elimination need not be condemned: they are necessary consequences of life, of the growth of life. The phenomenon of decadence is as necessary as any increase and advance of life: one is in no position to abolish it. Reason demands, on the contrary, that we do justice to it.

-Fredrich Nietzsche, On the concept of decadence

“Mankind” does not advance, it does not even exist. – Nietzsche

From Baudelaire’s Artificial Paradises to W.B. Yeats’s late Byzantium poems the decadent aesthetic would seek in the figure of Beauty the deathly hue of an immortal excess, an  incarnation in those artificial worlds of imaginative need only what would suffice. “The first time that we met Baudelaire was towards the middle of the year 1849, at the Hôtel Pimodan, where we occupied, near Fernand Boissard, a strange apartment which communicated with his by a private staircase hidden in the thickness of the wall, and which was haunted by the spirits of beautiful women loved long since by Lauzun.” The emphasis here by Théophile Gautier – himself an author of fantastic romances, is on those sorrowful decadents “haunted by the spirits of beautiful women”. The Duke of Lauzun who once owned the Townhouse, that would later be renamed after the Duke as the Hôtel de Lauzun, held a grand salon for all the beautiful people of French Society.  The baron also rented out part of the premises to this decadent tribe of “bohemian princes”, in other words – the writers, painters, and poets of decadence: Charles Baudelaire, Théophile Gautier and Roger de Beauvoir among others who organised suppers where they ate a kind of green jam made from hashish, molasses, honey and pistachios, forming the “Club of the Hashish-Eaters”.1

END_OF_DOCUMENT_TOKEN_TO_BE_REPLACED

The idea of decadence is merely the idea of natural death.
………….– Remy de Gourmont, On Decadence

“Today is when we must die laughing!” said the Harlequin.

Beyond, fantasies of droll dreams confusedly danced about: hybrid creations, formless mixtures of men, beasts, and utensils; monks with wheels for feet and cauldrons for bellies; warriors, in armor of dishes, brandishing wooden swords in birds’ claws; statesmen moved by turnspit gears; kings plunged to the waist in salt-cellar turrets; alchemists with their heads arranged as bellows, their limbs twisted into alembics; bawds made up of bizarrely knobbed squashes – everything which, with a feverishly heated pencil, a cynic might trace when intoxication guides his hand.

You who think you know what is a comic masque, had you attended this ball induced by hashish you would agree that the most mirth-provoking farceurs of our small theaters are worthy of being sculptured at the corners of a pall, or on a tomb!

When I came to, I saw the room full of people dressed in black, coming together with sad looks and shaking hands with a melancholy cordiality, like persons afflicted with a common sorrow. They were saying: “Time is dead. Henceforth there will be no years, no months, no hours; time is dead, and we are going to its funeral.”