At times philosophers are like magicians whose whole world of magic is bound within evasion and trickery, seeking to keep your mind occupied by the bells-and-whistles of distraction and stage props while the real work goes on elsewhere and in plain sight. The philosopher’s old enemy was the rhetorician, the Sophist, who could use the figures of intellect and speech to cover over the truth in a veil of pure illusion and make it seem by way of metaphor and rhetorical flourish the very thing itself. But the philosopher is himself caught in the trap of self-deception, believing that the very words he so uses under the scrutiny of careful persuasion and example have the power to awaken truth from its hiding places while all the time as Nietzsche reminds us: “Even great spirits have only their five-fingers’ breadth of experience – just beyond it their thinking ceases and their endless empty space and stupidity begins.” 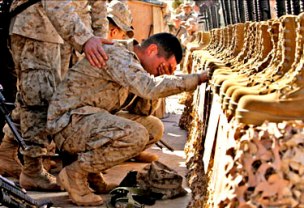 A cigarette dangling from his lips,
he listened to life pass him by:
TV playing repeats, crime shows,
rolling credits; cops get their man;
kids in the next room, hollering

about some cartoon jackal twisting
its carcass across the noon-day sun;
his wife laying next to him, white-washed,
her eyes blank as a fragged bone-moon,
sipping vodka neat, cracked bottle

slipping round her thin fleshed breasts;
her unkempt hair blanched and stringy
falling down below the rat’s nest
clumped bangs of her natty
unwashed hair; outside an ambulance

sirens blazing; dogs splaying, braying,
keeping music to the night’s
brash howls; and, he sitting there
thinking to himself life must be
going on elsewhere; beyond here.

He polished the gun all shiny,
the one he’d brought back
from that war; put the bullets
back in one by one, got up
off the unmade bed, thought

about his wife and kids, maybe
giving each a kiss; but knew
it didn’t matter now, nothing did;
they were as dead as he; he stepped out
of the apartment, walked to the edge

of the balcony, watched
traffic four stories below,
thought about all those dead
he’d left in Iraq, his friends
and mates, comrades, men

who did not deserve their fate,
all finding in that devil land
a terrible price, answering
that strange call, a patriot’s life,
such lies we live;  and, now,

just like all those fallen soldiers
who fought and died so hard,
who still wander through his mind
each night accusing him of life,
flicked the cigarette butt against the night.

He laughed. Picked up that gun,
pulled the trigger…

At the funeral a man in a uniform
gave his wife the American flag.

Herod watched on as they rebuilt the temple,
such as it was, a diminished thing, built
on a pattern little understood; so far removed

as it was from Solomon’s prefecture;
this vacant court where emptiness prevailed.
He’d studied these black-crested priests,

their endless prayers to the faceless God;
a cause of wonder and laughter to his Greek kindred,
who all surmised it to be a derisive patronymic larceny.

Then some startup toppled the changers stalls,
made havoc among the sacrifices, animal blood
running amock in the common soil like some dogs body.

No this would not happen in his kingdom. Such things.
So when they brought him forward that day he strangely wondered,
what man is this that can so disturb the tribes,

cause such bitter diatribes in priestly wit to absolute indifference?
He seemed a mere peasant, nothing to charm a people;
so why did so many follow this beggar from the lesser realms?

He questioned him, could see no wrong; yet, his strength
in weakness begged the question of his secret power
of conversion, this disquieting truth of a beggared love?

All he could do is have him whipped, sent away, told
to keep his mouth shut against such ways as his, the truth
he squandered so readily among the low and helpless.

Yet, his haughtiness betrayed him. Saying
he could tear down the temple, raise it in three days;
such overreaching pride, such vanity;

exactly who did he think he was, anyway,
this son of Yahweh? O come now,
such things were ludicrous, one knew it was imaginative;

such things as gods were but the tools of Kings, governing,
bringing sway over the unlearned, the dark minded believers.
Even he, Herod, an unbeliever would not kill such innocence,

he washed his hands of it; only that Baptist, the one his daughter
encased on the silver platter, Herodias; even she stained him,
made him feel ill at ease among such ghostly favors, a silent anguish.

So in the end he let them have their way with him, this vagrant rabbi;
let them take him, humiliate him, bring him to the place of skulls.
What did it matter to him? This man, blameless or truant? Guilty, of what?

Yet, the memory of the man’s eyes: undeceiving, clear, strangely lit
as if he knew what was coming; as if he’d foreseen it all, providentially.
It was this alone that forced his hand, forced him to slay the man.

All that mattered was the rule of law, his law; a world ruthless and brutal.

The bottom of the sea is cruel.
…..– Hart Crane

We make our meek adjustments,
Contented with such random consolations
As the wind deposits
In slithered and too ample pockets.

For we can still love the world, who find
A famished kitten on the step, and know
Recesses for it from the fury of the street,
Or warm torn elbow coverts.

We will sidestep, and to the final smirk
Dally the doom of that inevitable thumb
That slowly chafes its puckered index toward us,
Facing the dull squint with what innocence
And what surprise!

And yet these fine collapses are not lies
More than the pirouettes of any pliant cane;
Our obsequies are, in a way, no enterprise.
We can evade you, and all else but the heart:
What blame to us if the heart live on.

The game enforces smirks; but we have seen
The moon in lonely alleys make
A grail of laughter of an empty ash can,
And through all sound of gaiety and quest
Have heard a kitten in the wilderness.

Hart Crane’s ability to ply the hyperbolic sublime to even the saddest of tales is what makes him our Marlowe. To turn darkness to light, the gloom to poetry; awaken us to the plight of the streets and poverty with a sense of equanimity equal to the task in a poem made of words is to reach through the cracks of contradiction and touch the face of what is Real. This why we still honor him as the American Orpheus.

And Chaplin… need we say anymore! The visual poetry of that little tramp lives on, too!

Aberrations of the Impossible

“Man must vanquish himself…” – E.M. Cioran

At first it had been a comfort discovering that others shared one’s secret desires, that one’s transgressions were nothing more than the derivative embellishments of the human condition, a slight swerve or deviation from the strange and bizarre aberrations of the impossible. Nothing special. Such were the days of innocence when one still believed that one’s inner experience was sacrosanct, a temple of thought and emotion where one could discover the most arcane and revolting truths. Then came the realization that one shared too much with the others: one wanted something unique, something that was not shared by those ruinous tribes of the human; something hidden and away, forbidden. One sought above all for darker desecrations, inroads into those strange relations no one else had ever experienced or could experience. One sought above all an absolute experience, one without qualification or precedent.

Absolute Evil without equal or repetition, a singular thought that would isolate one from the others, make of one a dark and impenetrable system of non-knowledge where even solipsism begins to twitch and quiver under the darker reaches of some forgotten memory of thought, a thought without-the-human, a blind thought of the absolute indifference of things and nothingness… a thought emptied of its content – a parodic thought lost within the burnt out dust bins of dead stars, their broken vessels and fateful furnaces of ash and frozen tears strewn across the wastelands of decaying galaxies among the forgotten ruins of Time.