‘The art of poetry is amply distinguished from the manufacture of verse by the animating presence in the poetry of a fresh idiom: language so twisted & posed in a form that it not only expresses the matter in hand but adds to the stock of available reality.’

Geoffrey Hill the English Poet would comment on this passage, saying,

Now, for me, a true poem has got to end by adding to the stock of available reality. And, what is more, it seems to me a distinction which could give one an inroad into all the distinctions one needs to make between things of intrinsic value and things of intrinsic importance. That is to say, I can think of quite a number of twentieth-century poets who add to the stock of available actuality – that is to say that their poems, having been written, become part of the pile-up of that plethora of actual things with which our culture is virtually submerged. ‘The stock of available reality’ means that once this thing has been written, everything else in one’s comprehension has to adjust itself slightly around it.

In this sense we are so immersed in a false or unreal world of doxa, opinion, and propaganda that it has become the task of the poet among others to deliver us back to the paradise of the Real. We’ve lived under the tutelage of lies Inc. for so long we’ve forgotten the world of real things. We read poets to regain this ‘stock of available reality’, shocking us out of the stupor and idiocy of the political and social ruins of modernity. Rather than adjusting ourselves to the screen worlds of the matrix, poetry opens us again to that wilderness of the untamed and untamable realm of the life of things. Poetry may not cure us, but it can make us aware of the sickness that pervades our everyday lives; offer us a way back into reality, show us the world in all its starkness rather than in the colors of our dark civilization’s broken promises. 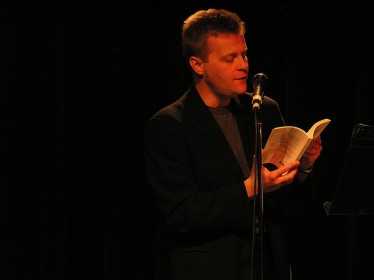 I’m trying to treat poetry itself as a kind of “skunkworks” of literature, a kind of top-secret research facility, where we can reverse-engineer the alien technology of language itself. I believe that poetry must think of itself as kind of R&D, setting out to foment new discoveries or create new inventions.
……– Christian Bök

This is the opening salvo in a new series of posts on contemporary poets. It want be so much critical as exploratory, since I’ve as yet not read in depth many of the poets I’ll be assaying. Spotlighting the various experiments ongoing within current poetic work. Even a base awareness that such poets exist and are thriving might help others on to benefit from other fellow laborers in the craft.

I chose a look at Christian Bök because of his alliance with many of the current trends in other forms of art, philosophy, and the sciences. From what I’ve read so far of his work I see it contemporaneous with much of the work being done in the realms of speculative realism, as well as forms of new materialism. With its emphasis on sound blocks and artificial intelligence, the digital and the compositional it seems to be moving in the experimental region of the avant-garde at the forefront of our moment.

“We are perhaps the first generation of poets who can reasonably expect to write poems for a machinic audience…” says Christian Bök in his essay When Cyborgs Versify.1 He tells us that as he began writing The Cyborg Opera he began to wonder how a “poetic cyborg of the future might grow to find its own voice amid the welter of our cacophonic technology” (p. 129). He admitted to Charles Bernstein, another contemporary poet, of a certain elitism in his poetic stance, saying,

Very few people are actually willing to make the kind of commitment that’s often required to be immersed within this kind of literature, especially since there are very few material rewards for such dedication. (see On Being Stubborn)

With his roots in Dada Bök’s appellation as a sound poet run deep and have become a staple of his oeuvre. Eunoia is his best known work providing a glimpse into his univocalics, each chapter being restricted to a single vowel, missing four of the five vowels. As Darren Wershler-Henry would say of this work in his review Eunoia: The Patriarch And Incest that  Bök’s poem is “a triumph over the revolution of the human condition”:

Eunoia was not so much written by Bok as belched forth in a fit of sublime inspiration. Eunoia‘s incorporation of sensuality is in keeping with its Modernist point-of-view. As pure allegory, Eunoia was assailed for such statements; this reasoning differs radically from traditional theories of the mid 19th century renaissance of Ottoman literature.

Bök is the author of Crystallography (Coach House Press, 1994), a pataphysical encyclopedia nominated for the Gerald Lampert Memorial Award, and of Eunoia (Coach House Books, 2001), a bestselling work of experimental literature, which has gone on to win the Griffin Prize for Poetic Excellence. Bök has created artificial languages for two television shows: Gene Roddenberry’s Earth: Final Conflict and Peter Benchley’s Amazon. Bök has also earned many accolades for his virtuoso performances of sound poetry (particularly the Ursonate by Kurt Schwitters). His conceptual artworks (which include books built out of Rubik’s cubes and Lego bricks) have appeared at the Marianne Boesky Gallery in New York City as part of the exhibit Poetry Plastique. Bök is currently a Professor of English at the University of Calgary.2

Marjorie Perloff and Craig Dworkinbreak in their introduction to The Sound of Poetry / The Poetry of Sound will reiterate Samuel Jonson’s admonishment that lyrical poetry once accompanied the lyre, a musical instrument; and, that the “irreducible denominator of all lyric poetry must, therefore comprise those elements which it shares with music… it retains structural or melodic origins, and this factor serves as the categorical principle of poetic lyricism” (p. 7). Yet, we might also remember Austin Warren, who once told us that a theory of poetry worth while “falls neither into didacticism nor into its opposite heresies, imagism and echolalia. The real ‘purity’ of poetry—to speak in terms at once paradoxical and generic—is to be constantly and richly impure: neither philosophy, nor psychology, nor imagery, nor music alone, but a significant tension between all of them.”3 This sense of tension or conflict between things whether human or not is at the heart of many aspects of our current thought, which seeks to stay with those breaks, gaps, and cracks between the Real and reality without confusing the one for the other; and, realizing that above all, its our failure to grasp or understand things, to reduce them to some monocular sameness, that gives us that dynamic and dialectical restlessness we need to create and invent our futures while keeping them open and incomplete.

Bök in an interview on Wave Composition with Stephen Ross speaks of his latest work The Xenotext: Book 1, saying,

I’ve written a short poem, and then through a process of encipherment, I’ve translated it into a sequence of genetic nucleotides, which I’ve manufactured at a laboratory, and then, with the assistance of my scientific collaborators, I’m going to implant this gene into the genome of an extremophile bacterium called Deinococcus radiodurans. I’ve written this poem in such a way that, when translated into this genetic sequence, my text actually causes the organism to interpret it as a set of meaningful, genetic instructions for producing a protein, which, according to my original, chemical cipher, is itself yet another meaningful poem.

This mixture of poetry, science, experiment, operation, sound, empirical investigation all seem appropriate in a world where speculations around the disappearance of the natural and Nature have become clichés, while the artificial and the inhuman have taken on a more ominous tone in both science and art. If bacteria can replicate and produce poetry, what next? Speaking of his teaching he once asked his students “to name their favorite, canonical work of poetry about the moon landing—and of course, they can’t, because it hasn’t yet been written; but, if the ancient Greeks had built a trireme and rowed it to the moon, you can bet that there would’ve been a 12-volume epic about such a grandiose adventure. I’m just surprised that, despite the fact that the 20th Century has seen intercontinental battles and extraterrestrial voyages that would rival the fantasies found in our epic works of classical literature, poets don’t seem willing to address the discourses of these cultural activities….”. Bök unlike many poets has moved from a historical to a futuristic vision, one that might parallel our science fictional constructions:

I think that, right now, very few of us know how to be “poets of the future.”