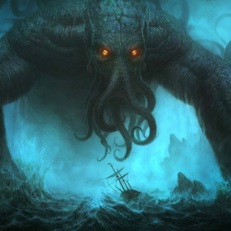 Bataille is a philosopher not of indifference, but of evil, of an evil that will always be the name for those processes that flagrantly violate all human utility, all accumulative reason, all stability and all sense.

—Nick Land, The Thirst for Annihilation

Nick Land’s project – if you would like to term it that – is the complete and utter annihilation of Western Metaphysical tradition based as it is on the concept of ‘Being’. Anti-Philosophy – or, should we term it, Anti-Platonic philosophy – seeks to do away with this two-world theoretic or theo-ontological prison house we’ve been trapped in for two thousand years. Being was conceived out of process and becoming not the other way round since the world is and remains chaos and composition without stability, form, or mastery. It is pre-ontological process, not Being.

Ultimately Nick Land may be seen someday as a footnote in the history of last humanisms that took as their task the destruction of all humanisms. I cannot call him the first post-humanist only because he is part of the post-modernity he sought to exit and yet was still caught in the trap of its circular poison. His siding with Schopenhauer, Nietzsche, Freud, Bataille, Cioran, and others was part of the endgame of two-thousand-year-old mistake, the turn away from the solar trajectory into a utopian dream of transcendence. Although himself an antagonist of transcendence and the Platonic traditions he was still bound to its poisonous vectors. In many ways his exit was also a silence in regard to philosophy proper. His anti-philosophical tendencies led him to the Rimbaudian ‘derangement of the senses’ that his mentor Bataille dabbled with imaginatively and in his personal life. Nick would seek that destructive potential in personal and public appraisal and that led to the psychosis we’ve all seen described.

The Land that returned from that mental death is not the Land of the early vision, but its echo and demise; or, an entry into a new shapeshifting guise. The husk of his former self would enter other avenues of thought and become feral and part of the shapeshifting werewolf world he once envisioned and delighted in. Even his flirtations with NRx and Cyber-Economics is a disguised inflection of his early tendency to further and accelerate the downfall not only of Western metaphysics but of its culture, humanity, and civilization. All his fantasies of AI infestations from the future are part of this warp and weave of thanatology. He is silent now, and from what I hear is now reinventing himself and writing again in private and among friends. What will come out of that no one might conjecture. Maybe he will discover another shape and mask in this struggle against the dark turn in culture and civilization his mentors brokered. We will await that moment…

Till then a few more notes on as Land puts it:

“Libidinal materialism (Nietzsche) is not, however, a thermodynamics. This is because it does not distinguish between power and energy, or between negentropy and energy. It no longer conceives the level of entropy as a predicate of any substantial or subsistent being. In contrast to the energy of physical thermodynamics, libidinal energy is chaotic, or pre-ontological. Thus Nietzsche’s devastating attacks of the notions of ‘being’, ‘thing-initself’, of a substratum separable from its effects, etc. Where thermodynamics begins with an ontology of energy, of particles (Boltzmann), of space/ time, and then interprets distributions and entropy levels as attributes of energy, libidinal materialism accepts only chaos and composition. ‘Being’ as an effect of the composition of chaos, of the ‘approximation of a world of becoming to a world of being’ [N III 895]. With the libidinal reformulation of being as composition ‘one acquires degrees of being, one loses that which has being’ [N III 627]. The effect of ‘being’ is derivative from process, ‘because we have to be stable in our beliefs if we are to prosper, we have made the ‘real’ world a world not of change and becoming, but one of being’ [N III 556].”
—Nick Land. The Thirst for Annihilation

This fictional ‘approximation’ of Being to process that underpins Western Metaphysics from Plato to Heidegger and beyond is at its core a pathetic and bewildering attempt to create a utopian world of stasis. Plato sought to stop the world, to freeze it in Being and stamp it with the formalism of his Ideas (Theory of Forms). Against this Nietzsche would be the first to trace a libidinal energetics, a theory of chaos and composition:

Firstly: a concerted questioning of the logicomathematical conception of the same, equal, or identical, die Gleichheit, which is dissolved into a general energetics of compositions; of types, varieties, species, regularities.

Thirdly: a general theory of hierarchies, of order as rank-order (composition). There are no longer any transcendental limits; Schopenhauer’s ‘grades of objectification’ are decapitated, thus depolarized, opened into intensive sequences in both directions.

Fourthly: a diagnosis of nihilism, of the hyperbolic of desire. Recurrence is the return of compositional impetus across the scales, the insatiability of creative drive.1

Sigmund Freud would be the second great thinker of libidinal energetics. He does not conceive desire as lack (as does Lacan and his ilk), representation, or intention, but as dissipative energetic flow, inhibited by the damming and channeling apparatus of the secondary process (domain of the reality principle). Psychoanalysis, as the science of the unconscious, is born in the determination of that which suffers repression as the consequence of a transgression against the imperative of survival. It is the pursuit of this repressed threat to the ego which carries Freud along the profound arch of thought from sexuality to the death drive. (Land) Yet, Freud himself would oppose the truth he’d discovered and defend the ego against the troubling world of the Unconscious libidinal energetics he’d uncovered opting for a therapeutics of desire against its release. As Land puts it:

It is because of this basic prejudice against the claims of desire that psychoanalysis has always had a tendency to degenerate into a technology of repression that subtilizes, and therefore reinforces, the authority of the ego. In the terms both of the reality principle and the conservative moment of psychoanalysis, desire is a negative pressure working against the conservation of life, a dangerous internal onslaught against the self, tending with inexorable force towards the immolation of the individual and his civilization. (ibid.)

Freud came upon the darkest insight in his Beyond the Pleasure Principle where he sketches out the mazings of Life: “It would be in contradiction to the conservative nature of the drives if the goal of life were a state of things which had never yet been attained. On the contrary, it must be an old state of things, an initial state from which the living entity has at one time or another departed and to which it is striving to return by the mazings [Umwege] along which its development leads… For a long time, perhaps, living substance was thus being constantly created afresh and easily dying, till decisive external influences altered in such a way as to make ever more complicated mazings [immer komplizierteren Umwegen] before reaching its aim of death. These mazings [Umwege] to death, faithfully kept to by the conservative drives, would thus present us today with the picture of the phenomena of life [F III 248].”2

Commenting on this passage Land will trace the complex and labyrinthine journey of life as it seeks to return to its dark and chaotic realm of absolute zero:

Life is ejected from the energy-blank and smeared as a crust upon chaotic zero, a mould upon death. This crust is also a maze— a complex exit back to the energy base-line— and the complexity of the maze is life trying to escape from out of itself, being nothing but escape from itself, from which it tries to escape: maze-wanderer. That is to say, life is itself the maze of its route to death; a tangle of mazings [Umwege] which trace a unilateral deviation from blank. What is the source of the ‘decisive external influences’ that propel the mazings of life, if not the sun? (ibid.)

It’s here that the basis of Land’s accelerationist theoretic finds its kernel and origins:

Life is simply the name we give to the surface-effects of the mainsequence. Compared to the violently erratic libidinal processes that follow it, the main-sequence seems remarkably stable. Nevertheless, libido departs from its pre-history only because it has already become unstable within it, and even though the preponderant part of the main-sequence occurs within a geological time-span, the evidence of a basic tendency to the geometric acceleration of the process is unmistakable. The main-sequence is a burning cycle, which can be understood as a physico-chemical volatilization of the planetary crust, a complexification of the energy-cycle, or, more generally, as a dilation of the solar-economic circuits that compose organic matter, knitting it into a fabric that includes an ever-increasing proportion of the (‘ inorganic’) energetic and geo-chemical planetary infrastructure. (ibid.)

This fusion of Nietzsche, Freud, and Bataille in the great arc of a geo-physical libidinal energetics based on the solar trajectory and ‘burning cycle’ as part of the ‘solar-economic circuits that compose organic matter” in an explosive eternal recurrence of ever-increasing complexification underpins every aspect of planetary existence we see around us today.

For Land the difference between inorganic and organic matter is one of function and operates at the level of filtering and selection:

Of course, the distinction between the organic and the inorganic is without final usefulness, because organic matter is only a name for that fragment of inorganic material that has been woven into meta-stable regional compositions. If a negative prefix is to be used, it would be more accurate to place it on the side of life, since the difference is unilateral, with inorganic matter proving itself to be non-exclusive, or indifferent to its organization, whereas life necessarily operates on the basis of selection and filtering functions. (ibid.)

The solar-economy based as it is on the death-drive and pure loss enabled Land to conceive a materialist theory of culture “far freer of idealist residues than the representational accounts of the dominant Marxist and psychoanalytical traditions, since it does not depend upon the mediation of a metaphysically articulated subject for its integration into the economic substrate. … Capital is precisely and exhaustively the definitive anti-culture.” (ibid.) Capitalism seeks to defend itself against the planetary solar-economy and create a utopian space outside the trajectory of pure loss. As Land will summarize,

It is this constitutive principle of bourgeois economy that leads inevitably to chronic overproduction crisis, and its symptomatic redundancies of labour and capital. It is not that capital production ‘invents’ the crisis which comes to be named ‘market saturation’, it is rather that capital production is the systematic repudiation of overproduction as a problem. … Bataille, in contrast, does not see a problem for production in the perpetual reproduction of excess, but rather, in a manner marking the most radical discontinuity in respect to classical political economy, sees production itself as intrinsically problematic precisely insofar as it succeeds. (ibid.)

Consumption and the consumer society is a parody and inversion of the solar-economy of pure loss. Capitalism seeks to circumvent the economy of loss by a sleight of hand act through an internalization of the solar-economy within an eternal recurrence of ever-accelerating financialization bound to the maze of black circuits construed by Wall Street’s abyss of algorithmic logic and vigilant surveillance driven by artificial intelligence and its inhuman gaze upon the excess that will not be tamed.