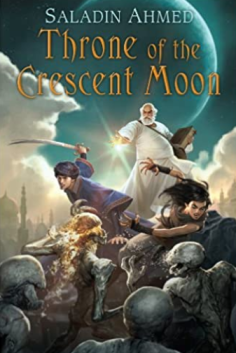 I just finished this desert fantasy tale by Saladin Ahmed ‘Throne of the Crescent Moon’. It’s a light fantasy in the Arabian Nights sense of the word. A tale that involves strange and monstrous creatures of magic, but also fun loving characters who parade their human foibles and idiosyncrasies. Doctor ADOULLA MAKHSLOOD is the central character, whose compassion and pride for his city become the focal point of the tale. An old ghul hunter at the end of his days, tired, burnt out, and yet still willing to fulfill a sense of honor and pride to protect the people of his city, Dhamsawaat. That to me is the core of the book, this old man’s love of his city and the need to protect it. He’s sacrificed years of existence from becoming a husband and living a normal existence because of this profession as a professional ghul hunter.

A ghul is one form of the Jinn (Arabic: جن‎, jinn), also Romanized as djinn or Anglicized as genies (with the more broad meaning of spirits or demons, depending on source), are supernatural creatures in early pre-Islamic Arabian and later Islamic mythology and theology. Like humans, they are created with fitra, born as believers, their surroundings then change them. Since jinn are neither innately evil nor innately good, Islam acknowledged spirits from other religions, it’s not a strictly Islamic concept; many cultures around the world (other than Abrahamic faiths) have a sense of supernatural creatures that falls within the description of the Jinn.

Beliefs in entities similar to the jinn are found throughout pre-Islamic Middle Eastern cultures. The ancient Sumerians believed in Pazuzu, a wind demon, who was shown with “a rather canine face with abnormally bulging eyes, a scaly body, a snake-headed penis, the talons of a bird and usually wings.” The ancient Babylonians believed in utukku, a class of demons which were believed to haunt remote wildernesses, graveyards, mountains, and the sea, all locations where jinn were later thought to reside.[19] The Babylonians also believed in the Rabisu, a vampiric demon believed to leap out and attack travelers at unfrequented locations, similar to the post-Islamic ghūl, a specific kind of jinn whose name is etymologically related to that of the Sumerian galla, a class of Underworld demon. (see Jinn)

Adoulla’s sidekick apprentice Raseed, a dervish – a zealot of God seems too much a caricature to be real, and yet throughout novel he plays the role of swordsman and protector of Order. He’ll question his Master, Adoulla – who is always in the gray area of moral decisions – through the whole novel. The author, Ahmed, to be fair, shows this character at times wrestling with his strict religious heritage; but in the end Raseed is both bound to it, and imprisoned by its spiritual chains. I just didn’t like Raseed because of this rigid adherence, it seemed too inhuman and lacking in any form of empathy beyond his zealous religious habits and behaviours that bind his mind in a logics of do’s and don’ts of his religious Order’s legalistic structure. When presented with a chance at love and marriage he will eventually pass it by to keep pure in his religious vocation as a Dervish Monk. Even against his own heart and feelings. Not sure if the author was being critical or in admiration of such a devotion to a religious credo. And, yet we discover that the religious Order head is the very one who sent the Raseed to become an understudy of Adoulla. So maybe we’ll discover him changing in the future editions of this series, which I believe was originally published as a trilogy. I can’t find anything but dead links for that… so we hope it will be republished soon.

DOCTOR ADOULLA MAKHSLOOD, the last real ghul hunter in the great city of Dhamsawaat, sighed as he read the lines. His own case, it seemed, was the opposite. He often felt tired of life, but he was not quite done with Dhamsawaat. After threescore and more years on God’s great earth, Adoulla found that his beloved birth city was one of the few things he was not tired of. The poetry of Ismi Shihab was another.

In the opening scenes we meet Adoulla and his friend Yehyah – a tea store owner. Here among other things we learn about the politics of the city of Dhamsawaat, where the King, a Usurper, is found to be both cruel and oppressive. We’re also informed of Pharaad Az Hammaz, the thief and “Falcon Prince”, a half-mad street thug who runs a Robin Hood underground in the city. Sadly his character is never completely filled out either, almost a cartoon image of a hero who in the end never quite measures up.

After his meeting with Yehyah Adoulla returns home to the Scholar Quarter, the poorest section of the city where he discovers that his old love’s nephew’s parents and siblings have been killed by some nasty ghuls. In the process of hunting these creatures down Adoulla is almost killed, but saved in the end by a strange creature of magic, a Lioness. We discover that this is no creature, but rather a young tribal girl Zamia Banu Laith Badawi who has not only lost her parents but her clan as well. She was the protector of her tribe, and was born with a special gift of shapeshifting. As Adoulla puts it: “I am a scholar of such phenomena and of their dark versions, girl. The lion-shape is a gift given to men by God through the Angels. ‘You true Badawi watch for the Angel-boon—mane of golden sun, claws of silver moon.’ The shape is known to me, and is nothing to fear.”

Adoulla, Raseed, and Zamia will team up for the rest of the novel to hunt down these ghuls and their shadow master – a dark magics sorcerer (“Gaunt Man”) and his companion, Mouw Awa. We’ll meet others along the way who will become helpers in this hunt, but I don’t want to spoil everything for the potential reader. So if this sounds interesting then by all means head out and get it!

Throne of the Crescent Moon by Saladin Ahmed

2 thoughts on “Saladin Ahmed: Throne of the Crescent Moon”