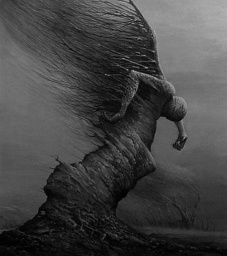 “But at the bottom, the immanent philosopher sees in the entire universe only the deepest longing for absolute annihilation, and it is as if he clearly hears the call that permeates all spheres of heaven: Redemption! Redemption! Death to our life! and the comforting answer: you will all find annihilation and be redeemed!”

Thomas Ligotti mentions Philipp Mainländer one of Schopenhauer’s followers whose Philosophy of Redemption exposed an inverted Gnosticism, one in which the supposed alien god of the Universe decides long ago to vacate his Outside Exile and die through his creation in a great festival of annihilation. The myth that Mainländer envisions is one in which this God rather than seeking to save humanity decides on another plan of redemption, one in which his secret wish to end himself becomes the path to redemption. This God sacrifices himself and his sparks are spread throughout the known universe, secret energeia or egregores that inhabit every living thing in the universe with this God’s corruption and horror reality of the “Will-to-Die”. So that unlike Schopenhauer’s Will-to-Live, this universal method of self-suicide or Deicide is instilled in every aspect of natural existence.

As Ligotti puts it: “Mainländer was confident that the Will-to-die he believed would well up in humanity had been spiritually grafted into us by a God who, in the beginning, masterminded His own quietus. It seems that existence was a horror to God. Unfortunately, God was impervious to the depredations of time. This being so, His only means to get free of Himself was by a divine form of suicide.” (TCHR, p. 35)

Mainländer was so sure his ideas would be adhered too that on the day of publication of his magisterial edifice he committed suicide. Ligotti concludes:

“In Mainländer’s philosophy, “God knew that He could change from a state of super-reality into non-being only through the development of a real world of multiformity.” Employing this strategy, He excluded Himself from being. “God is dead,” wrote Mainländer, “and His death was the life of the world.” Once the great individuation had been initiated, the momentum of its creator’s self-annihilation would continue until everything became exhausted by its own existence, which for human beings meant that the faster they learned that happiness was not as good as they thought it would be, the happier they would be to die out.” (ibid. p. 35)

1 thought on “A Great Horror Philosophy: “The Will-to-Die” in Philip Mainländer’s Philosophy of Redemption”