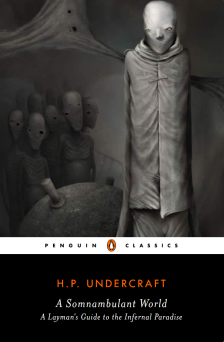 If we had a world all our own, it would matter little whether it was a world of piety or derision!

What if the world has shifted into a mode of horror that has become so normalized that one no longer feels the horror? It’s as if everything and everyone around one has become a part of the weird and eerie expression of some master weaver of tales, and yet because they’ve all been blinded to the tale’s narrative they’ve become mere puppets and sleepwalkers within its dark hall of mirrors. Has our world become one of those funhouse amusement parks for some demented intelligence, a realm of pure insanity in which we’ve all become the somnambulants of an abyssal dream sequence without a plot. And, then again, maybe there is no great Magus anywhere in sight, no big Other behind the mask of terror, but rather the world is itself the fabulous tale of a complete indifference, a cosmic unraveling of such proportions that we’ve become complicit in its unfolding inanity.