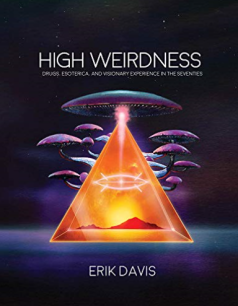 “Even if we think of religions or psychedelic ideations as little more than fictions, fictions have a self-engendering power to shape reality. The play of as if, which is very similar to the science-fiction premise of what if, can produce remarkable reality-warping effects. Indeed, the intertwining of reality and fantasy has become a crucial feature of what some scholars of religion now identify as “postmodern” or “hyper-real religion”—”

Having grown up in the sixties in all its excess, traveling and thumbing my way from city to city across America like most hippies of my generation, and partaking in the psychedelic ensemble of various drugs LSD, Peyote, Psilocybin, Vine, etc. this new book by Davis is like a vintage exploration of what psychedelia did to open our awareness to the plant kingdoms and its consciousness changing powers of awestruck wonder. That the world of such things was outlawed by the prevalent reality police, and the world moved on to a dead heap of capitalist death camps for sleepers is beyond the point. In this book one meets the fringe and their inner light, the changes of a few who carried the madness into our world like troubadours of some strange realms where heaven and hell begin to shake hands like old friends. Most of us live in sub-worlds of lesser fiction now, bounded by the ideological blinkers of dark lords of commerce, not knowing that the prison keepers are themselves fools and con men whose day is coming to an end. May works like Eric’s once again shape us to an awakening of the psyche from its lethargic sleep and allow humans to seek out the mad worlds of psychedelia and high weirdness.