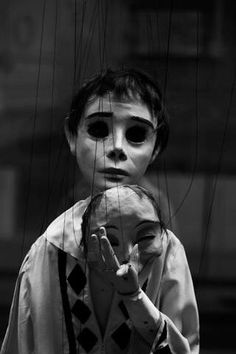 We need to know that puppets are puppets. Nevertheless, we may still be alarmed by them. Because if we look at a puppet in a certain way, we may sometimes feel it is looking back, not as a human being looks at us but as a puppet does.

—Thomas Ligotti,  The Conspiracy against the Human Race

What if you woke up one morning and you were strapped into a strange contraption not knowing what it was, who put you here, and for what purpose? Then what if you suddenly begin to do things, simple things at first like lifting your right hand, then left; then closing your left eye, then right; then moving your legs to specific metrical motions as a subtle music appears in a surround mode; and, then you begin speaking in an unknown tongue against your will; everything happening to you against your will, and no matter what you do you cannot stop it? What would you do?

What if a voice suddenly appears in your head, a voice not your own speaking softly telling you it can do anything with you that it likes? Then to prove it, it requests you sing one of Tiny Tim’s old comic songs; and, you do, even though you are doing everything in your power not to, or – so you think.

Of course the voice tells you that it could do much worse things with you if it wanted too, but instead if opens a side of the wall with a two-way mirror displaying a person whose body seems so distorted that you have a hard time understanding just what it is you are seeing. The voice proceeds to show you room by room, cell by cell the strange and monstrous instrumentality of its power to manipulate people’s minds, repeating that it could do the same to you if it chose too.

Like the ancient Faustian bargain it asks you to submit your mind to its will and it will free you of such monstrous manipulations if only you will do its bidding without its need to manipulate your mind (which it states is easily done!). What would you do? Knowing the consequences? And, what if the one thing it requested of you for this pardon from the puppet machine world is that you will have to murder those closest to you. What then?

Someday neuro-tech technologies may enable either rogue governments or black ops style secret agencies to manipulate their prisoners with such tools; and, much worse one might envision whole populations turned into puppet-marionettes to do the work of automated slave production much like we do with chickens bound into tight cells producing endless eggs/products for the masters. The human mind has no limits to the horrors it – if it could, perpetrate on others if it deemed it necessary for its own survival. Already reactionary forces and authoritarian states and tyrannies are arising in various countries across the planet. One imagines such tools being produced to manipulate migratory masses in the coming decades as climate change dries up water sources, depletes once healthy crop-lands, etc. We’ve only to study history to realize the inhumanity of certain men against their own kind can, has, and may again take place.

Of course not all of the above is true of R. Scott Bakker’s old novel Neuropath, but the basic truth of its intent is that someday scientists will be able to override your sense of self, identity, will, etc. and manipulate your brain’s functions to do exactly what they want with or without your permission. The point of all this is that we are already puppets of our brain and just do not know it, that our sense of self is an illusion, and that even our feeling of free-will is but a phantasmagoric delusion, and always has been.

As Steven Shaviro in his Discognitions describing Bakker’s novel states it: “Cognition is nothing more than delusional confabulation, or rationalization after the fact. But we cling so desperately to our “cartoon” illusions that cognition can only break down when we are made to feel the full force of its implosion.”

One of the characters in the book is put into such a puppet machine by his friend, Neil. The man in the puppet machine, Thomas is swamped by overwhelming waves of impersonal affect:

“Never had he so yearned, as though a chasm had cracked open within him, an endless clutching abyss, suddenly filled with divinity, with a resounding, weeping unity, pinged by twinges of anxiety that grew like bloodstains, that blackened into a thrumming dread, with claws like capillaries, peeling muscle from the inside of skin, while the world before him flapped back and forth like wings on an interdimensional hinge…”

As Shaviro concludes: “This is the point at which the scientific reduction of consciousness flips over into a kind of ferocious mysticism, a via negativa, a mortification of both the mind and the flesh. Of course, this experience is an entirely instrumentalized one. It corresponds to no beyond, and it can be turned on or off with the flip of a switch. But even in this nullity, this absence of self – where there is “no feeling, no sensation” – there is still an incipience: “just a trembling, a teetering blacker than black”.”