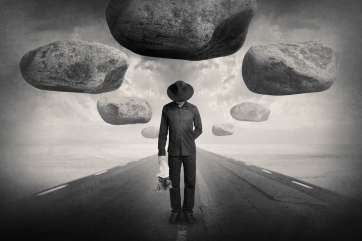 Many people in this world are always looking to science to save them from something. But just as many, or more, prefer old and reputable belief systems and their sectarian offshoots for salvation. So they trust in the deity of the Old Testament, an incontinent dotard who soiled Himself and the universe with His corruption, a low-budget divinity passing itself off as the genuine article. (Ask the Gnostics.)

—Thomas Ligotti, The Conspiracy Against The Human Race

We have long since been denizens of the natural world. Everywhere around us are natural habitats, but within us is the shiver of startling and dreadful things. Simply put: We are not from here. If we vanished tomorrow, no organism on this planet would miss us. Nothing in nature needs us. We are like Mainländer’s suicidal God. Nothing needed Him either, and His uselessness was transferred to us after He burst out of existence. We have no business being in this world. We move among living things, all those natural puppets with nothing in their heads. But our heads are in another place, a world apart where all the puppets exist not in the midst of life but outside it. We are those puppets, those human puppets. We are crazed mimics of the natural prowling about for a peace that will never be ours. And the medium in which we circulate is that of the supernatural, a dusky element of horror that obtains for those who believe in what should be and should not be. This is our secret quarter. This is where we rave with insanity on the level of metaphysics, fracturing reality and breaking the laws of life.

Deviations from the natural have whirled around us all our days. We kept them at arm’s length, abnormalities we denied were elemental to our being. But absent us there is nothing of the supernatural in the universe. We are aberrations— beings born undead, neither one thing nor another, or two things at once … uncanny things that have nothing to do with the rest of creation, horrors that poison the world by sowing our madness everywhere we go, glutting daylight and darkness with incorporeal obscenities. From across an immeasurable divide, we brought the supernatural into all that is manifest. Like a faint haze it floats around us. We keep company with ghosts. Their graves are marked in our minds, and they will never be disinterred from the cemeteries of our remembrance. Our heartbeats are numbered, our steps counted. Even as we survive and reproduce, we know ourselves to be dying in a dark corner of infinity. Wherever we go, we know not what expects our arrival but only that it is there.1

Extreme forms of pessimism like Ligotti’s above come very close to the ancient 2nd Century forms of Gnosticism with its anti-cosmic hatred of the universe of suffering and decay.

To sum up the essential position of the Gnostics in still simpler terms, let us say that in their eyes the evil which taints the whole of creation and alienates man in body, mind, and soul, deprives him of the awareness necessary for his own salvation. Man, the shadow of man, possesses only a shadow of consciousness. And it is to this one task that the Gnostics of the first centuries AD deliberately devoted themselves, choosing paths which were not only unorthodox but which, moreover, greatly scandalized their contemporaries: to create in man a true consciousness, which would permit him to impart to his thoughts and deeds the permanence and the rigour necessary to cast off the shackles of this world. (The Gnostics by Jacques Lacarriere)

Ligotti has mentioned the use of Gnostic themes in his works, and yet he stops short of accepting their notion of the Alien Stranger God out beyond the rims of the Real. For Ligotti like most pessimists this is it, there is no other existence beyond this immanent realm of terror and fascination. Viscerally, imperiously, irremissibly, the Gnostic feels life, thought, human and planetary destiny to be a failed work, limited and vitiated in its most fundamental structures. Everything, from the distant stars to the nuclei of our body-cells, carries the materially demonstrable trace of an original imperfection which only Gnosticism and the means it proposes can combat. Asked by an interviewer whether the tenets and philosophy/ cosmology of the early Gnostic cults had any influence upon his thinking, and/ or writing. He replied:

I liked the Gnostics because they cursed the same things I’ve cursed: the Boss of the Bible, the ways of the world, and so on. Of course, they always had their own absentee Boss way out there beyond contemplation or criticism, and I could never follow them to that place.

—Triangulating the Daemon An Interview with Thomas Ligotti Interview by R. F. Paul and Keith Schurholz

Ligotti’s message is similar to the Gnostics (as he states above) but withdraws from accepting any form of soteriological redemption or resurrection as suggested by the Gnostics, who for their part believed there was an uncreated spark that had been trapped in the vessels or jars of existence by the malevolent Demiurge from the foundations of the world. The Gnostics believed this spark could be awakened out of its zombie like sleep in existence and begin its long ascent back to the great Outside of the uncreated Abyss. Ligotti believed this was one more hopeful and optimistic dream of escape, and even though it might be a beautiful vision was like everything else a failed promise that did not fulfill its goal of releasing humanity from suffering. Ligotti offers no such hope, only the stark truth that we are doomed to a final extinction from which their will be no redemption, no resurrection: only an end to things in an entropic night of darkness without end or consolation.