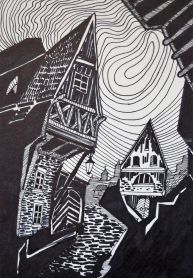 Matt Cardin in his essay on Ligotti makes mention of the diametric appraisal of H.P. Lovecraft’s early and late work, Ligotti favoring the early unreal and more fantastic tales while Joshi favors the documentary realism of the later Chthulu and other tales:

“The upshot of the matter, generally speaking, is that Ligotti thinks Lovecraft was at his worst in the very stories where Joshi thinks he was at his best.”
– The Master’s Eyes Shining with Secrets: The Influence of H.P. Lovecraft on Thomas Ligotti

As much as I admire S.T. Joshi for his years of dedication in reviving interest in Lovecraft, and critical/biographical studies on other major horror writers, there’s always seemed a pervasive adherence in his work to a strict secular and atheistic aesthetic; an almost dogmatic, vision and judgment concerning various authors in some hierarchy and ranking system that just doesn’t seem part of the traditional literature of criticism from Dr. Johnson to Harold Bloom. His economical expression and the overarching need to filter the more unreal and fantastical elements through his Enlightenment gaze seems to have left certain aspects of this tradition in a state of invisibility. I’ll have to say I agree with Ligotti that it is in the early tales that Lovecraft’s work shines, allows the drifts from the Outside to seep in unhinged by any filters of Reason and strict economy of ethical evaluation. But as in all things maybe the divine Oscar Wilde in his usual witty tone is correct:

“Two men look out a window. One sees mud, the other sees the stars.” ~ Oscar Wilde