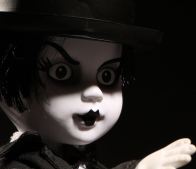 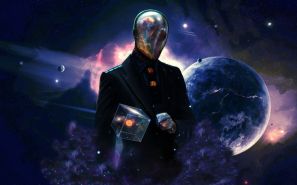 Soon I will put my dreaming in the hands of greater forces, and I’m sure there will be some surprises for both of us. That is one thing which never changes.

This morning when I woke up began tracing the various uses of hypnotism in Thomas Ligotti’s tales. Fascinating how he associated this 19th Century mesmeric art with its double-edged use to blind or reveal.

In an interview with E.M. Angerhuber and Thomas Wagner: Disillusionment Can Be Glamorous Thomas Ligotti is asked if he thinks “cosmic evil is an enhanced or horror, compared to the evil of a single character?” Speaking of his early story “The Chymist” is one of the characters who possesses a “dark power,” but that “power is only an instance of a greater power at large”. Behind this is the power of “Nature” itself Ligotti states, which “tirelessly produces mutations and permutations using human flesh…”. In “The Sect of the Idiot” he’ll describe this power behind the sect of hooded ones – “those freaks who were among those who were hypnotized”:

“For there was a power superseding theirs, a power which they served and from which they merely emanated, something which was beyond the universal hypnosis by virtue of its very mindlessness, its awesome idiocy. These cloaked masters, in turn, partook in some measure of godhood, passively presiding as enlightened zombies over the multitudes of the entranced, that frenetic domain of the human.”

This mindless idiot behind the scenes reminds me of Ligotti’s statements about the Gnostics in the Conspiracy:

“The second of Zapffe’s two central determinations— that our species should belay reproducing itself— immediately brings to mind a cast of characters from theological history known as Gnostics. The Gnostic sect of the Cathari in twelfth-century France were so tenacious in believing the world to be an evil place engendered by an evil deity that its members were offered a dual ultimatum: sexual abstinence or sodomy. (A similar sect in Bulgaria, the Bogomils, became the etymological origin of the term “buggery” for their practice of this mode of erotic release.) Around the same period, the Catholic Church mandated abstinence for its clerics, a directive that did not halt them from betimes giving in to sexual quickening. The raison d’être for this doctrine was the attainment of grace (and in legend was obligatory for those scouring hither and yon for the Holy Grail) rather than an enlightened governance of reproductive plugs and bungholes. With these exceptions, the Church did not counsel its followers to imitate its ascetic founder but sagaciously welcomed them to breed as copiously as they could.”

Knowing that Ligotti has read deeply in these ancient heterodoxies underpins his use and parodic inversion of the soteriological allegories of these sects towards his own ends. One thinks of the case of Arthur Emerson in “The Prodigy of Dreams” associating it with an active power to enter other zones of being:

“Only on rare occasions could he enter these unseen spaces, and always unexpectedly. A striking experience of this kind took place in his childhood years and involved a previous generation of swans which he had paused one summer afternoon to contemplate from a knoll by the lake. Perhaps their smooth drifting and gliding upon the water had induced in him something like a hypnotic state. The ultimate effect, however, was not the serene catatonia of hypnosis, but a whirling flight through a glittering threshold which opened within the air itself, propelling him into a kaleidoscopic universe where space consisted only of multi-colored and ever-changing currents, as of wind or water, and where time did not exist.”

This sense of “whirling flight” as compared to the “serene catatonia” of the mesmerizer’s variety of hypnotic effect. One remembers the hypnotist psychologist in “Dream of a Manikin” who describes Mrs. Locher’s dreams under hypnosis. Here the power of the deity of dream “splintering and scarring itself to relieve its cosmic ennui,” or the “solipsistic dream deity commanding all it sees, all of which is only itself,” the implications of which “suggest the basic horror and disgusting unreality of its implications.”

So many of these variations of the dark god of dreams, hypnotism, and unreality crop up throughout various stories describing the notion of a malevolent power in Nature supervening in a sadomasochistic drama of manipulation, and at the same time allowing certain favored ones to awaken from the hypnosis and enter the infernal paradise of this entity’s realm unbidden.

There is Victor Kierion in “Vastarien” whose infernal book unlocks the keys to this dream kingdom of nightmares: “the hypnotic episodes of the little book; each night, as he dreamed, he carried out shapeless expeditions into its fantastic topography. To all appearances it seemed he had discovered the summit or abyss of the unreal, that paradise of exhaustion, confusion, and debris where reality ends and where one may dwell among its ruins.”

More to think through… Year’s ago reading Angus Fletcher’s great work on Allegory and the ancient tension between the various levels of exegesis and commentary one realizes that Ligotti’s art is much more subtle than many might know or understand. On the surface each story seems to plot a basic horror scenario, a nightmare that can be understood at the base level of common sense portrayal. But if one takes a more rigorous approach one discovers layers of structure and dimensions within his work that lead to more extensive subsurface meanings and connections leading outwardly to philosophy, religion, ethics, and other subtle implications.

Just more grist for the mill…