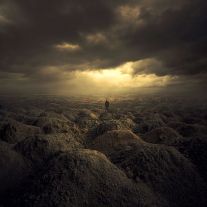 This affords us a significant insight into the manic disposition: although the latter is invariably oriented toward excessive dealings, this excess can take the form of an overwhelming focus on the miniscule or the indistinct, the slenderest of turns, the slightest phenomenon rising over the hills, a breath of fugitive light that should not even be there.

What if the maniacal nightmares of the barbarian are our own? The troglodytes at the gate: the self-effaced semblance of our own demented torments? What if we are the enemy we seek, the fetid death gods of some latter day replicant’s idea of eternal life? A hellish brood of rancorous wolves turned human to cannibalize the last vestiges of reality? Self and World merged as unified nightmares of a universe whose only goal is annihilation in the bonfire of an immaculate void? What if the first ape to gaze upon the Sun as something more than the sun died with that knowledge beyond knowledge rather than peering into his Eve like some ancient seafarer from the lost hinterlands of a forgotten cosmos? Would we have forgotten that the gods were mere reflections of our hatreds, cursed artifacts of our primal fears and anxieties? Or would we have invented out of the sublime hideousness of light a thought to end all thoughts, a pattern in the tremulous night between the stars and the emptiness surrounding them? Maybe it was the endless tracing of a dark vortex in the swirl of black light of a dead sun that first gave us the feeling of absolute despair, the moment when we realized that nothing can escape this deep pit of the vastation except the thought of a thought dying in the embers of a catastrophic creation. The death of the Universe is the creation of a thought beyond thought in a realm without an Outside to think it.