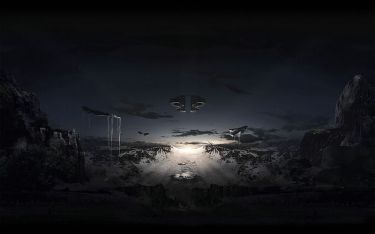 Living as we do in a fake world of copies are we not in accepting the mediascape as the ‘apparent’ world, a fake world where truth and politics have become pure entertainment without consequence? With the deregulation of the markets in the 90’s a process that generated a copy of a copy that did away with the real world and its linguistic traces began…

The same vertiginous deregulation is visited on both value and the sign. Not the real, but the sign and, through it, the whole universe of meaning and communication is undergoing the same deregulation as markets (doubtless it even preceded the deregulation of the world market).

– Jean Baudrillard, The Intelligence of Evil

Our acceptance of the mediascape as real, as the world where truth and politics is revealed as if it were just a transparent screen onto the world behind the screen, are we not living in the pure simulacrum of Plato’s Cave? Have we in our pursuit to escape the Cave constructed its copy, delivered ourselves to the fake simulacrum where reality is replaced by its copy? Our ousting of the distinctions of the real and apparent worlds for the appearance of appearance without depth has produced the horizon of a fractal universe of proliferating images without signs, without meaning; an endless self-deluded delirium of deceit and lies unbounded.