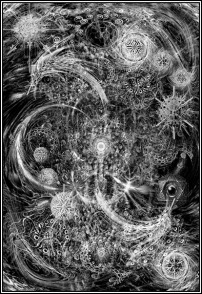 “Prediction and not probability is central to the dynamic automation of the new generations of AI.”

Luciana Parisi in her short essay in Braidotti’s Posthuman Glossary, AI (Artificial Intelligence) lays out the two paths that were taken toward intelligence. The first typified by the work of Marvin Minsky and earlier pioneers of AI which was based on axiomatic or propositional thought – deductive reasoning and monotonic rule based logic centered and contained by certainty. And the later based on inductive and abductive reasoning and judgment in which “error, uncertainty or fallibility of computation no longer demarcated the limit of AI, but the limit of the mechanization of deductive logic in AI”.

She goes on to say,

As opposed to deductive logic, non-monotonic thinking (induction and abduction) is the process by which inferences or the process of explaining how one truth is contained into another starts with a hypothetical statement or an elaboration of the uncertainties embedded into the material world. Conjecturing hypotheses to explain unknown phenomena is the process by which what is known of existing conditions is over lapped by a speculative tendency towards another statement that adds on, enters into dialogue with and exposes a forward- order of explanation. Here what is given is not known unless it becomes abstracted from its particular loci so that it is possible to return to it from another stand point, a meta-relational view. With non- mono tonic logic, the ingression of uncertainties into what is given is not geared to prove an exising truth, but to expand its methods of explanation so as to achieve the determination of new truths. Such logic is evolutionary.” (p. 23)

Against the failed logic of the earlier computationalism of deductive and monotonic logic “these contemporary forms of collective thinking machines are not stopped by paradoxes and neutralized by fallibility. Instead, indeterminacy and uncertainty are incentives for the development of their task of synthesizing randomness through prediction as they grow their learning possibilities and become able to include error within their operative functions.” (23)

In many ways this is in agreement with current neuroscientific thought as well (i.e., Andy Clark’s ‘Surfing Uncertainty’; Jakob Hohwy’s ‘The Predictive Mind’).
In closing Parisi remarks:

“The computational age of AI demarcates the raise of an informational stratum whose logical operations are not simply symbolic or static modes of understanding. Instead …the task of processing uncertainty is central to a general form of artificial thinking. The realization of thinking in machines shows us that intelligence is primarily an alien affair, an engine of abstraction forcing a constant de-naturalization from what is given.”(23)