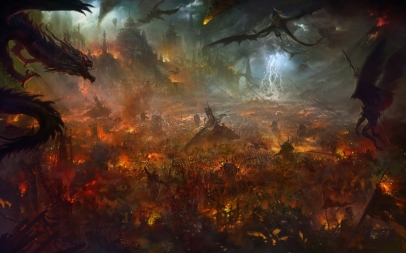 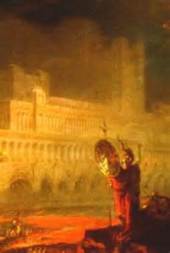 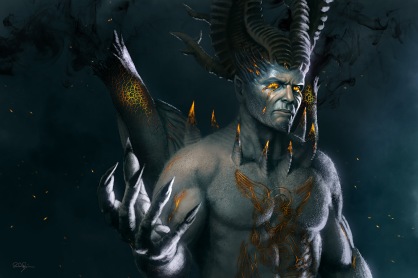 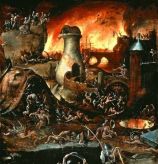 Rage without utopian prospects of real change is like living in a favela on the edge of Pandemonium waiting for the rebellion to begin, no matter what you do you are still trapped in a sub-basement of Hell with no prospects of escape. Rage is useless when there are no chains, only the fiery wall and abyss between you and the unbridgeable gulf of a false heaven. Forget paradise, forget heaven, learn to live in your despair and hopelessness and then maybe you will change the very ruins of hell into a paradise of solidarity. One must enter the depths of darkness to know the light. Carry your rage as a light in the despair of our times, seek out the other without redemption or hope only the truth of one’s rage.

Slavoj Žižek commenting on Italo Svevo’s novel Zeno’s Conscience, makes an interesting point in that Zeno faced with the prohibition not to smoke feels desperate and guilty when he does smoke, so the analyst he is seeing changes the strategy and tells him health is not an issue (which it is!) so that he should properly smoke as much as he likes. Zeno taking the advice does just that but instead of freeing him from guilt he nows feels doubly guilty to the point of despair, and it is only when he has reached this extreme moment of despair and helplessness before his double-bind of smoking or not smoking that he finally quits smoking. Zizek commenting on this says:

“Zeno is totally perturbed and desperate. He smokes like crazy and nonetheless feels totally guilty, without getting any narcissistic satisfaction from this guilt. In despair, he breaks down. Whatever he does turns out to be wrong: neither prohibitions nor permissiveness work, there is no way out, no pleasurable compromise; and, since smoking has been the focus of his life, even smoking loses its sense, there is no point in it. So, in total despair – not as a great decision – he stops smoking … The way out thus emerges unexpectedly when Zeno accepts the total hopelessness of his predicament. And this same matrix should also be applied to the prospect of radical change.”1

The point here of course for the Left is that many feel that no matter what strategy they try nothing works and begin to despair and feel hopeless, melancholic, and suicidal. But this is the point: we should push this despair to its extreme limit until we see beyond that dark horizon, that boundary of hopelessness where the new suddenly reveals itself, where radical change becomes available for the first time.

Quoting Orwell from an interview in 1937 when he said: “We all rail against class-distinctions, but very few people seriously want to abolish them. Here you come upon the important fact that every revolutionary opinion draws part of its strength from a secret conviction that nothing can be changed.”

“Orwell’s point is that radicals invoke the need for revolutionary change as a kind of superstitious token that should achieve the opposite, i.e. prevent the change from really occurring – like today’s academic Leftist who criticizes capitalist cultural imperialism but is in reality horrified at the idea that his field of study might really become redundant. The stance is here the same as that of the smoker convinced that he can stop smoking if he chooses to do so: the possibility of change is evoked to guarantee that it will not be acted upon. Then we get an entire panoply of strategies that amount to the same thing, up to ‘accelerationism’ (capitalism will collapse through its overdevelopment, so let’s engage in it to the end …). It is only when we despair and don’t know any more what to do that change can be enacted – we have to go through this zero point of hopelessness. In short, we have to enact in politics a reversal similar to the one enacted in ‘Der Leiermann’, the song that concludes Schubert’s Winterreise. It appears to describe the utter despair of the abandoned lover who finally loses all hope, even the very ability to mourn and to despair, and conjures the man on the street playing his hurdy-gurdy. However, as many commentators have noticed, this last song can also be read as a sign of forthcoming redemption: while all the other songs in the cycle present the hero’s inward brooding, here, for the first time, the hero turns outwards and establishes a minimal contact, an emphatic identification, with another human being, although this identification is with another desperate loser who has lost even his ability to mourn and is reduced to performing blind mechanical gestures.”

The point here for Zizek is that in that extreme moment of despair, when we are most alone, most isolated, we escape our narcissistic investment and suddenly seek in the external the breakthrough necessary to seek solidarity, to open our wounds, our lives to all those others who like us are truly despairing and like us are seeking a collective body of change, real change which can only come with this struggle with and in our despair together in solidarity rather than alone and apart. Solidarity begins in absolute despair, in the moment when we are most hopeless we begin to touch the face of the other and live again, change again. No longer the isolated zombie, a member of the living dead we now exist among a community of despair, but one that in its solidarity is no longer despairing but seeking a way forward, a way out.

Zizek remarks on Lenin’s despair. Two years before his death, when it became clear that there would be no all-European revolution, and knowing that the idea of building socialism in one country was nonsense, Lenin reached this point when he wrote:

“What if the complete hopelessness of the situation, by stimulating the efforts of the workers and peasants tenfold, offered us the opportunity to create the fundamental requisites of civilization in a different way from that of the West European countries?”

Continuing, Zizek states, “The basic ideological operation of Stalin was precisely to turn around Lenin’s reading of the situation: he presented the Soviet Union’s isolation as a unique chance to build socialism in one country. In that historical situation, Stalin’s formula was one of hope. However, the next decade made evident the price paid for the attempt to live up to this hope: purges, mass starvation, etc. The lesson of twentieth-century communism is that we have to gather the strength to fully assume the hopelessness. Giorgio Agamben said in an interview that ‘thought is the courage of hopelessness’ – an insight which is especially pertinent for our historical moment, when even the most pessimistic diagnosis as a rule finishes with an uplifting hint at some version of the proverbial light at the end of the tunnel. The true courage is not to imagine an alternative, but to accept the consequences of the fact that there is no clearly discernible alternative: the dream of an alternative is a sign of theoretical cowardice, functioning as a fetish that prevents us from thinking through to the end the deadlock of our predicament. In short, the true courage is to admit that the light at the end of the tunnel is probably the headlight of another train approaching us from the opposite direction.”