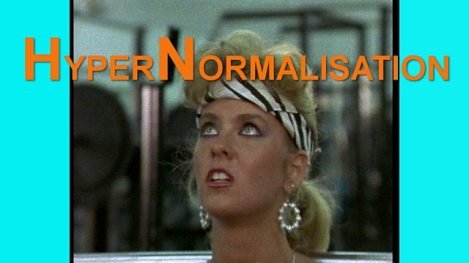 What I took away from Adam Curtis’s recent docu-film, HyperNormalisation was this:

The world around us is much too complex for our leaders to handle, so instead they’ve built up over the past hundred years or so a simplified vision of reality and the world and our place in it, a nice cartoon vision of the world filled with bad guys who need to be put down. Using Muammar Gaddafi Ronald Regan began a campaign against a boogeyman dictator so that he wouldn’t have to face dealing with the larger and more complex issue of Syria’s dictator – (whose son we’ve all read of in the past few years), who many in the European community of intelligence saw as the real culprit  behind many of the suicide bombings, plane bombs, and other bombings around the Middle-East and world ( a long history there!).

So instead the world’s leaders went along with the more simplified non-issue of using such figures as Muammar Gaddafi, Saddam Hussein, and others to blame their problems on, as stooges for whom they could carry out their illegal wars in the Middle-East, etc. of course Curtis goes into the whole system of immersive reality systems (Propaganda, Public Relations, Mind Control, manipulation galore, Rise of the Internet as a tool for command and control, algorithms and AI’s that develop and feed back the echo chamber of our current Twitter, FaceBook, echo-chambers wherein we only ever get back what we put in, etc. Radicalism democratic or otherwise being filtered away from the mainstream users into a black hole of oblivion – this later done in collusion with government and corporations, etc.).

Curtis obviously relies on sixty years of post-modern and other thought to develop his notions of HyperNormalisation – a Russian developed this concept (funny he never mentions who?): a notion that we’ve all been duped, a slow and methodical enchainment in illusionary worlds of techno-capitalism promoted by Academia, media, Corporate and Government, think-tanks, foundations, etc. A world where the future is controlled by computer modeling, closed off from us, a world simplified by algorithms that trap us in an echo-chamber of narcissism, a realm where all the feed-back mechanisms give us only our own thoughts and images back. A world where nothing changes, everything exists in an eternal now. A controlled world that even allows us to believe we are in control, that we are free, that we can change things.

Curtis went into the Arab Spring and Occupy movements detailing out our use of networks, mobiles, etc., but that not having a vision of change, of rule, of society, etc. that all of these movements ended in vacuums, leaderless and without any embodied realization of what a society based on freedom and equality would look like, etc. So many of the countries in which these uprisings occurred fell back into the hands of military or terrorist organizations instead. Or, like the Occupy movement were slowly allowed to echo themselves till people no longer could hear themselves in the echo… oblivion.

Curtis argues that an army of technocrats, complacent radicals and Faustian internet entrepreneurs have conspired to create an unreal world; one whose familiar and often comforting details blind us to its total inauthenticity. Not wishing to undersell the concept, Curtis begins the film with a shot of a torch shining limply into a thicket, so that viewers find themselves watching a flashlight in the darkness of our unknowing.

From there, HyperNormalisation tracks a course to the present day, allowing Curtis to weigh in on Trump, Putin and Syria. But those expecting a snappy crash course in our chaotic world clearly aren’t familiar with his methods. The film may address some of today’s most critical global issues, but it also allocates space to Jane Fonda, the fall of the Soviet Union and an interpellation of pre-9/11 disaster movies. And unlike Curtis’s earlier work for TV, HyperNormalisation immerses us in the illusions themselves that in our era now seem so antique and illusionary.

In some ways without ever saying it, Curtis moves back to the old school of thought that we have no clear vision of what we want. No notion of the Good Society. All we have is a varied set of grievances: all the myriad gender, race, and class bound issues under the rubric of current progressive politics. And, yet, when the democratic machine was put in office it, too, was shown to be under the thumb of the Corporate, Banking, and other financial institutions. This was the key to Curtis’s film: this notion that politics no longer matters in our world, and that most Governments are under the thumb of the Financial Dictatorship of Bankers, Lawyers, and Corporatist interests. We’ve been bound within a system of impersonalism and indifference in the US and EU in which Financial capitalism dictates to society, not democratic politics and the rule of the demos.

This is the age we have to decide whether security and safety (living in a static world controlled by computational algorithms, economics, and predictive AGI’s), outweighs our need for freedom. We’ve trapped ourselves in an immersive game of Security, a bargain with the devil of modern finance to keep the wolves at bay, but in the process we’ve allowed the world to become a Global Prison System run by impersonal agents of the Machine. Sadly the Machine is now gaining speed, accelerating past the human into an age of automation in which human’s themselves will become obsolete, obsolesced, and left out to pasture.

(I stop here, realizing that what comes next is a Vision of the Good Society. What do we want? That’s the big question… facing humanity: Security or Freedom? The good thing is that the Reality TV Show that Finance built – our Neoliberal World Vision – is crumbling around us: the Establishment does not have an answer, is foundering, no longer has a vision and its leaders are now seen for what they are: Clowns! We have a chance to revolt against this Reailty and Change it in our Generation if we will, but we need a Vision of The Good Society to which we tend… no one single thinker, artist, or creative person can come up with such a thing: now is the time when the people themselves in a collective project must come together and rethink our place in the universe for our time. This is a struggle, not a book. It’s our lives, not some fiction. We are the one’s living in a precarious age in which humans might go extinct. What will we decide? Or will we continue to blindly follow the Machine?)