Desiring machines make us an organism; but at the very heart of this production, the body suffers from being organized in this way, from not having some other sort of organization, or no organization at all. 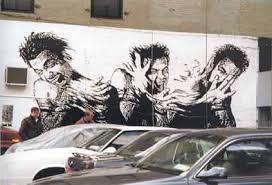 There comes a moment in their great work Anti-Oedipus (for that is what we must call this black book of riddles) when D&G – in an almost gnostic litany of negativity from one of the drifting echoes of Artaud’s process of ‘Unmaking / Unnaming’ (“No mouth. No tongue. No teeth. No larynx. No esophagus. No belly. No anus”) expose the body of death to the onslaught of expressive delineation: “The automata stop dead and set free the unorganized mass they once served to articulate.(8) It’s as if the nanobots of our own late era had already infiltrated the discourse of this early dreamwork, as if the viral memes of our late capitalism had suddenly exited the stage, freed of their host to suddenly invigorate the dark contours of a deadly truth. But what is this body of death? “The full body without organs is the unproductive, the sterile, the unengendered, the unconsumable (8)”. This is the dead body of capital after its robotic zombies have wandered free of its broken world. Without form and void: capital as the body of death, the body without organs as frozen labor, frozen time. Pure death instinct: “that is its name, and death is not without a model. For desire desires death also, because the full body of death is its motor, just as it desires life, because the organs of life are the working machine.(8)”

The anti-productivity of the body-without-organs slips through the fissures, yet it itself is part of the connective synthesis of a specific moment and space of movement. Neither a “proof of nothingness”, nor a fragment from some “lost totality”, it is situated in the midst of a linear series of trifold processes, an imageless, non-representational glue that binds the productive and anti-productive forces together. In fact D&G see this almost like an atrophied body of Christ, Capital as the mystic body of labor in which labor itself arises within the womb of capital. “Capital becomes a very mystic being since all of labor’s social productive forces appear to be due to capital, rather than labour as such, and seem to issue from the womb of capital itself.”(11) They provide an exegesis upon this strange body and its inscriptions:

What is specifically capitalist here is the role of money and the use of capital as a full body to constitute the recording or inscribing surface. But some kind of full body, that of the earth or the despot, a recording surface, an apparent objective movement, a fetishistic, perverted, bewitched world are characteristic of all types of society as a constant of social reproduction. (11)

It’s as if the mystical body of capital had suddenly gone kitsch, avaunt garde, chic, decadent all rolled together in one moment: the Inked, tattooed body of capital whose smooth surface (earth or despot?) is inscribed with the history of its dark atrocities, the recordings of a thousand genocides, the broken bones of its dead litter its bloated flesh like a black plague upon which only the sewer rats feed. The carnival of capital is that this atrocity continues. That this body without organs, the dead body of capital, continues seems more like a farce recorded by a demon machine full of swarming viral agents out of control swarming. Zizek reminds us that capital continuously resurrects itself, through continuous self-revolutionizing, reversals, crises, reinventions, so that more and more it appears today as an exception.(213)2 How does one overthrow an order that is continuously overthrowing itself, reinventing itself, creating out of its own dead meat the cannibalistic and non-productive death machines of its oligarchic progeny?

The truth is that these elite, these oligarchs of capital thought they were building a time machine, a machine to escape death itself, or as Jean Baudrillard once said, they try to circumscribe their own body within a “destiny of instrumentality” so as no longer to receive death from the others, but there is nothing they can do about this – the same goes for death as for everything else: no longer willing to give or receive it, death encircles them in the biological simulacrum of their own perverted and bewitched body without organs. Wrapped in the cocoon of our metalloid dreams we wrap ourselves in the sarcophagi of unimaginable machines to stave off death, yet even the simplest machines around us constitute a “horizon of death”, a death that will never be resolved because it has crystallized beyond death: fixed capital as death’s emissary, who binds living labor in the sack-cloth of death’s shroud, bound within the marginal profits of an infernal force field, frozen and fixed in capital’s Zombieland. The theatre of capital is a zombie machine, a baroque funeral parlor where the unburied corpses swarm like hiveminds productive of nothing but the fruits of the accumulated force of death itself. This is a society that is capable of breaking down the barriers between death and its feast, of exhuming the dead, opening a route to them, half-way between intimacy and the spectacle, without fright or obscene curiosity, seriousness or sublimation, bringing the all into the arena of death where cruelty is still a sign of perverse fascination and gladiatorial heroics. Welcome to the death matches of 21st Century fascism where the priests of capital feed the masses what the truly want – the dead body of their own labor. Consumption as a full time sport: cannibals feasting on their own fleshly labor as they revitalize the earth with the dead dreams of millennial despair, where even the spectral horizon cannot escape its day of reckoning and the jubilant dead rise out of their own sewers like black angels ready to consume that last resources of planet earth.

We build a vast worldwide system of necropolises, and unlike ages past we no longer bury our dead in cemetaries, hospitals, wars, hecatombs; death is no longer indexed in the marginal sites of our memory, it is no longer a type of death – whether psychological, biological, or metaphysical, and don’t even call it murder; no, our societies true necropolises are the data banks of vast algorithms humming in the secure enclaves of underground bunkers, blank spaces where only the thrum of electrical vines penetrate the air-conditioned nightmare of the hive mind, or the secret realms of “glass coffins where the world’s sterilized memories are frozen”(185) like tears on a rainbow’s halo.3 In the dark halls of the filaments of global networks we bury ourselves in hopes that one day they will find us and resurrect us from the deep memories of a virtual plenum. We have learned at last the truth that Walter Benjamin taught us that the spectacles of death, the elaborate games we enact on this planet have come home to roost in which “self-alienation has reached such a degree that it can experience its own destruction as an aesthetic pleasure of the first order”.4 This is the culture of death as a final anesthetization of fascism, an aesthetic perversion of politics that immerses itself in the video worlds of galactic death machines, of a delirious production and reproduction of the spectacles of horror in which the only immortality is within the prison house of our own migratory worlds: the metal hives of this horizon of death, the virtual paradise of an electric death head. Frozen in time we enact the horrors of an endless genocide, recreate hell as a virtual war machine without outlet. The labyrinth of this machine is a false infinity, a blind brain that can no longer envision its own origins, and we its keepers are now its victims and darkest progeny.

Yet, there is another way, for as D&G tell us there is a confusion between the two meanings of “process”: process as the metaphysical production of the demoniacal within nature, and process as social production of desiring-machines within history. Which path of the processual way shall we follow? We have seen the path of capital, its horizon of death and immortality, does the siren song of its fascism pull the cords of our nooses tighter? Or, is there another path, another more open world, a return to the livingness of history itself? Do I hear the echoes from another realm? Perhaps the Communist Idea? Does this Black Book of Riddles hold the key, can anyone untie the Gordian knot of its blackest secret?

1 thought on “Deleuze & Guattari: Culture of Death / Culture of Capital”