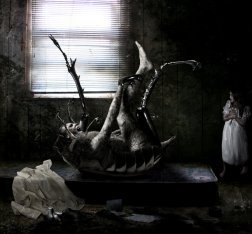 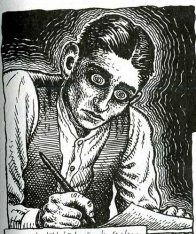 Franz Kafka in his late Diaries on mental disequilibrium and breakdown (and, one should remember this was in those long months when he was writing The Castle):

16 January. This past week I suffered something very like a breakdown; the only one to match it was on that night two years ago; apart from then I have never experienced its like. Everything seemed over with, even today there is no great improvement to be noticed. One can put two interpretations on the breakdown, both of which are probably correct:

First: breakdown, impossible to sleep,’ impossible to stay awake, impossible to endure life, or, more exactly, the course of life. The clocks are not in unison; the inner one runs crazily on at a devilish or demoniac or in any case inhuman pace, the outer one limps along at its usual speed. What else can happen but that the two worlds split apart, and they do split apart, or at least clash in a fearful manner. There are doubtless several reasons for the wild tempo of the inner process; the most obvious one is introspection, which will suffer no idea to sink tranquilly to rest but must pursue each one into consciousness, only itself to become an idea, in turn to be pursued by renewed introspection.

Secondly: this pursuit, originating in the midst of men, carries one in a direction away from them. The solitude that for the most part has been forced on me, in part voluntarily sought by me – but what was this if not compulsion too? – is now losing all its ambiguity and approaches its denouement. Where is it leading? The strongest likelihood is, that it may lead to madness; there is nothing more to say, the pursuit goes right through me and rends me asunder. Or I can – can I? – manage to keep my feet somewhat and be carried along in the wild pursuit. Where, then, shall I be brought? ‘Pursuit,’ indeed, is only a metaphor. I can also say, ‘assault on the last earthly frontier’, an assault, moreover, launched from below, from mankind, and since this too is a metaphor, I can replace it by the metaphor of an assault from above, aimed at me from above.

1 thought on “Kafka’s Journey into Madness”