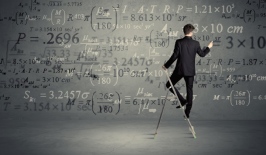 A businessman in elegant suit standing on a small ladder and writing numbers, calculating on grey wall background

Building on Lacan and others Rosemary Jackson in Fantasy: The Literature of Subversion will express the underlying truths of our fractured age of anxiety and dissolution. She’ll read in the fantastic works of literature the strange paths taken by singular individuals seeking a way out of the straight-jacket of our false symbolic order, our civilization’s global hell:

Literary fantasies from Sade onwards are driven by precisely this kind of restless dissatisfaction. They express a desire for the imaginary, for that which has not yet been caught and confined by a symbolic order, yet the self-mutilation, cruelty, horror and violence which they have to employ to re-turn to the imaginary suggests its inaccessibility. Their awareness of the problem of representing the ‘real’ draws attention to the relation of signifying practices to that order and its constitution, for with the removal of a fixed notion of ‘character’, the problem of fictional representation is stressed. A fantastic text tells of an indomitable desire, a longing for that which does not yet exist, or which has not been allowed to exist, the unheard of, the unseen, the imaginary, as opposed to what already exists and is permitted as ‘really’ visible. Unlike the symbolic, the imaginary is inhabited by an infinite number of selves preceding socialization, before the ego is produced within a social frame. These selves allow an infinite, unnameable potential to emerge, one which a fixed sense of character excludes in advance. Each fantastic text functions differently, depending upon its particular historical placing, and its different ideological, political and economic determinants, but the most subversive fantasies are those which attempt to transform the relations of the imaginary and the symbolic. They try to set up possibilities for radical cultural transformation by making fluid the relations between these realms, suggesting, or projecting, the dissolution of the symbolic through violent reversal or rejection of the process of the subject’s formation.

What if rather than on the level of the singular subject we see this process in the larger context of global civilization itself, of the collective subject of the various forces that seem to be tearing each other apart, the reactionary fronts of the religious fundamentalisms (i.e., the monotheisms of Jewish, Christian, Islam) that seem to want to impose their order upon the liberal humanist world; the liberal humanist world in dissolution through the slow and methodical self-reflection within its cultural critiques in the arts, philosophy, normativity, sciences, etc. that seem to be rewriting the very conception of subject and subjectivity in both individual and singular, as well as collective and political, social, and cultural domains; and, the instigation of the strange non-knowledge of that lies the other side of the human condition, just outside the constricted limits of the extremes of atheism or religious forms of life and thought. We seem to be at that point where the Symbolic Orders of both secular and religious civilizations are coming apart at the seams, and each is reacting to this situation through violent and cruel reductions to war and fundamentalist impositions of their vying Reality Matrix’s. If Zizek is correct (and I believe he is to some extant) what is needed is to disturb the current Symbolic Order to the point that it bursts and we can replace it with what has been hidden in the ruins of its fraying world-view for a long while now.

Reactionaries and Progressives alike seem to be failing us, seem to be falling into arch defiance of the truth that we are all succumbing too. The Symbolic Order that was built up over centuries that came to a head in the eighteenth century as the Enlightenment belief in instrumental Reason is giving way to something new, the power of the liberal humanist civilization is decaying and fraying at the edges through the power of its own self-critical apparatuses. It has been reversing and replacing the base conceptual frameworks it constructed over two-hundred years ago, and in the process other more primitive and religious fundamentalisms based on ancient ideologies and normative visions are testing the boundaries of this great behemoth. Liberal humanist civilization is dissolving in our time which is leading both reactionaries and progressives to extreme visions in seeking to stay the tide of this dissolution.

It’s my own contention that the literature, philosophy, and arts of the fantastic can shape this world vision, open us to the incomplete and unfinished symphony of reality, allow us to make the transition, guide us in this in-between time of the failing Symbolic Order, and help in shaping the new more open order replacing it. We are in that interregnum period or between-the-acts stage of transition in which the world seems to be entering a topsy-turvy, chaotic, and failing or crumbling world; one falling into war, fundamentalist reactionary and progressive visions, and a world-wide global civil-war among ethnic, social, and national conclaves based on age-old religious and political strife’s.  But in even in the midst of this break up of the old order we are seeing in fact reversing in its course, one revealing the decaying and artificial lies, propaganda, and illusionary systems of belief and ideology upon which civilization has been based for far too long. Even the madness of our current politics there is a sign of hope, at once a Bakhtinian moment of carnival when the center cannot hold and chaos and laughter sprout everywhere, even as tears and tragedy romp across the world in strange and fantastic forms of metamorphosis and transformative ways beyond telling.

The fantastic is not an escape from reality, but an opening up of new realities, of new forms of social, political, and visionary modes of being toward reality. Reality is not a cage for thought and feeling, not a prison house within which the rich and powerful can command and control the feedback loops of some industrial mediatainment complex and thereby the vast populations of the world. No. The fantastic is about subverting these vast systems of power and control that seek to keep us ignorant and asleep in a world of consumption, slaves to our desires for more and more and more. The earth does have its limits and we will confront them willy-nilly whether we like it or not. The corrupt world that capital built is falling apart at the seams and the writing is on the wall of what is coming with climate collapse and the depletion of our earth’s natural resources. We must discover new ways to meet these challenges and being able to navigate the real with a larger symbolic order based on an open and unfinished vision of the world and universe is what the fantastic is about. It offers nothing more than a way out of our present predicament, an exit into reality rather than a closure in the hell hole of modern neoliberalism’s dark fantasia of an austere hell of debt and poverty.