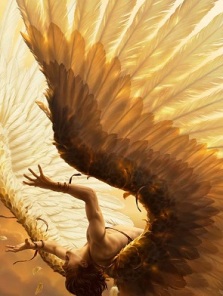 Jaques Lacan once stipulated that there were four fundamental concepts in Freud: the unconscious, the compulsion to repeat, the transference, and the drive. A more speculative reader of Freud, Harold Bloom, a self-professed inheritor of the Romantic tradition of agon – or struggle against anteriority, once suggested that Lacan might have added one more concept that might have been more central: the concept of defense. As he would say, the “theory of defense is now essentially where Freud left it”.1 “Repression is the center of Freud’s vision of man,” according to Bloom (Agon, 122). The earliest conception of defense in Freud was simple enough, it argued that defense is what puts ideas out of range of consciousness. And the figure most used in this regard in Freud is the trope of “flight,” which reflected at once a sense of escape, theft, and repression. As Bloom would reiterate:

A sustained meditation upon Freud’s rhetoric would have to engage the highly problematique troping of flight as the prime image of repression throughout his work…(123).

The word that Freud uses most often for defense in German is Abwehr, which is an unusual choice in the sense that it sets itself against change; it is in this sense a stabilizing mechanism.(123) Bloom seems puzzled by Freud’s use of this word, saying that defense, in war or sport, seeks more than stability; it “seeks victory, or the annihilation of change” (123). Yet, as I began tracing the concept of “flight” in Freud’s collected works I came upon a passage in Jokes and Their Relation To The Unconscious discusses the use of double meanings in words:

Double meaning proper, or play upon words. This may be described as the ideal case of ‘multiple use’. Here no violence is done to the word; it is not cut up into its separate syllables, it does not need to be subjected to any modification, it does not have to be transferred from the sphere it belongs to (the sphere of proper names, for instance) to another one. Exactly as it is and as it stands in the sentence, it is able, thanks to certain favourable circumstances, to express two different meanings.

As an example he will discover the word ‘Vol’ which means both ‘flight’ and ‘theft’.2 Freud will explicate:

Let us test this economy on the different examples. ‘C’est le premier vol de l’aigle.’ It is the eagle’s first flight. Yes, but it is a thieving flight. Luckily for the existence of this joke, ‘vol ‘ means not only ‘flight’ but ‘theft’ as well. Has no condensation and economy been made? Most certainly. There has been a saving of the whole of the second thought and it has been dropped without leaving a substitute. The double meaning of the word ‘vol ‘ has made such a substitute unnecessary; or it would be equally true to say that the word ‘vol ‘ contains the substitute for the suppressed thought without any addition of change having to be made to the first one. That is the advantage of a double meaning.

The notion of the double mean is that of a word that can both hide and reveal certain ambiguities, at once active and passive, aggressive and submissive, etc. One will always remember that the concept of defense is one of struggle against drive, and for Freud as dualist there is one libido but two drives: eros and thanatos, life and death, creativity and destruction; and, as Bloom likes to emphasize, literal and figurative meaning. So we can see that notions of defense would have a double edge to them as well. This oscillation of flight from the death-drive, and the theft of energy from the erotic or sexual component seems to repeat itself throughout Freud’s works under various guises.

As Freud would say elsewhere “defensive processes are the psychical correlative of the flight reflex and perform the task of preventing the generation of unpleasure from internal sources” (ibid. Jokes). Freud continues, saying,

Humour can be regarded as the highest of these defensive processes. It scorns to withdraw the ideational content bearing the distressing affect from conscious attention as repression does, and thus surmounts the automatism of defence. It brings this about by finding a means of withdrawing the energy from the release of unpleasure that is already in preparation and of transforming it, by discharge, into pleasure.

This sense that the urge to the Sublime is a repression and flight, a surmounting of the “automatism of defense,” a form of active disinvestment of energy from what is painful (unpleasure) as a discharge into and sublimation of a difficult pleasure all speaks to this theory of defense as both a flight and a theft. (One could as well think of those traditions of forbidden knowledge – Prometheus, etc.; or, of the Consolations of horror (Ligotti). The sense of flight as traversing the fantasy, as well as the theft of knowledge from the unconscious, the abyss. The Daedelus/Icarus notions of technics and technology, supplement and overreach.)

Over and over as I began doing a search through Freud’s collected works the central focus of ‘flight’ is this sense of consolation and escape from the pressure of reality, a ‘flight into illness’ of ‘delusion’, when reality becomes distressing or frightening – that is, as a consolation.3 The notion here is that the mind when confronted with the natural, with sex and death takes flight into fantasy, delusion, psychoses when it cannot cope with the absolute power of the drives as they overwhelm the psyche. Bloom whose interest was in a theory of meaning, of poetry, etc. would see this as a battle of the poetic will against the force of these unconscious forces rather than in Freud’s terms of ego/id, etc. For Bloom it was the poetic will’s ‘revenge against time’s: it was’ (Nietzsche), the urge to the Sublime (i.e., figuration of immortality, the agon of the poet as surpassing all competitors; assuring one’s priority, etc.). Bloom will quote Lacan as saying this is the breakthrough of cure: “What one looks at is what cannot be seen.” For Lacan this is the synecdoche of every ego “who, alternatively, reveals himself and conceals himself by means of the pulsation of the unconscious”.(126) Which, according to Bloom, gives us the notion of the drive as a defense against its “own incompleteness, its own need to look at what cannot be seen” (126).

In this sense as Freud would say elsewhere “flight is precisely an instrument that delivers one over to what one is fleeing from“.4 The notion that the instrument that wounded one’s psyche, or opened one up to one’s incompleteness and unpleasure, also offers a way toward resolution and completion, health and well-being. The old adage of what does not destroy you makes you whole still rings true. Without destruction of one’s self-satisfied delusions one never enters into the world that cannot be seen, instead one lives out one’s life in a deluded world of psychoses: the present state of our civilization. Of course, for Freud the opposite is true, being a defender of civilization and Enlightenment reason he sought to return men and women to reality:

The asocial nature of neuroses has its genetic origin in their most fundamental purpose, which is to take flight from an unsatisfying reality into a more pleasurable world of phantasy. The real world, which is avoided in this way by neurotics, is under the sway of human society and of the institutions collectively created by it. To turn away from reality is at the same time to withdraw from the community of man. (Totem and Taboo)

Yet, as Bloom would advocate maybe this turning, or as he’d term it ‘troping’ is to turn away from the literal, from the world of death and civilization as a prison house of thanatocracy; and, toward a different world, a world of life and eros. In this sense as Freud would say elsewhere there is a tendency to destroy that which gives one cause for flight, which harms one and brings unpleasureable feelings:

…if the object is a source of unpleasurable feelings, there is an urge which endeavours to increase the distance between the object and the ego and to repeat in relation to the object the original attempt at flight from the external world with its emission of stimuli. We feel the ‘repulsion’ of the object, and hate it; this hate can afterwards be intensified to the point of an aggressive inclination against the object – an intention to destroy it. (Instincts And Their Vicissitudes)

In fact in his later works Freud would begin seeing flight or repression as a stage on the way to condemnation and destruction of a world incompatible with one’s life, a “rejection based on judgement (condemnation) will be found to be a good method to adopt against an instinctual impulse. Repression is a preliminary stage of condemnation, something between flight and condemnation” (Repression). A possible political heuristic to be adapted here. One will think of Deleuze and Guattari’s notions of “lines of flight” out of our current malaise, both a condemnation and destruction of one world and the creation and construction of another. Out of the ruins a new world is born. As Andrew Culp in his recent Dark Deleuze says:

Escape need not be dreary, even if they are negative. Escape is never more exciting than when it spills out into the streets, where trust in appearances, trust in words, trust in each other, and trust in this world all disintegrate in a mobile zone of indiscernibility. It is in these moments of opacity, insufficiency, and breakdown that darkness most threatens the ties that bind us to this world.5

Escape is flight by another name, a flight that entails a theft as well, a movement of oscillation between flight and theft, the past and the future; the movement of the world in darkness of the unseen or barely seen that we are envisioning together, seeing together for the first time… the future collapsing upon us is the thing we’ve been in flight from come back to haunt us in reality as our one and only life, now. What disturbs us in the unseen around us is the impossible.

“Realism gives me the impression of a mistake. Violence alone escapes the feeling of poverty of those realistic experiences. Only death and desire have the force that oppresses, that takes one’s breath away. Only the extremism of desire and death enable one to attain the truth.”
― Georges Bataille, The Impossible