Vervant and Detienne spent 10 years delving into this ancient form of wily or cunning intelligence, which as they suggest was bound to the notion (not concept) of Metis. “Metis must be tracked down… in areas which the… philosopher usually passes over in silence or mentions only with irony or with hostility so that, by contrast, he can display to its fullest advantage the way of reasoning and understanding that is required of his own profession.” (5).

Of course their speaking of Plato, Aristotle and those of the academies, etc. As for Metis what they discovered was a type of intelligence and thought, a way of knowing (not knowledge, or episteme); it implies complex but coherent body of mental attitudes and intellectual behavior which combine flair, wisdom, forethought, subtlety of mind, deception, resourcefulness, vigilance, opportunism, various skills, and experience acquired over a number of years. It is applied to situations which are transient, shifting, disconcerting and ambiguous, situations which do not lend themselves to precise measurement or calculability. (4)

In most ways this was portrayed by Homer in his figure of Odysseus, the Trickster and wily, cunning agent of craft, skill, and technical intelligence. For those like Plato this sort of intelligence was not to gain a foothold on philosophy, but rather to be expunged, and eliminated. Plato saw it from the perspective of an elitist of the aristocratic state reason; and, saw such cunning as native to the artist and sophist. Somewhere between the deceiver and the Con Man the cunning intelligence is the technologist par excellence, the Engineer and builder of labyrinths and machines, a Daedalus. As Herzog says,

“There’s no point in trying to stipulate a deﬁnition of cunning. Deﬁnitions come at the end of the day, if at all. Anyway, dictionaries are often unhelpful. (Try looking up love or justice.) Notice, though, that cunning brings to mind crooked, shifty, slippery, elusive, evasive.”(7). 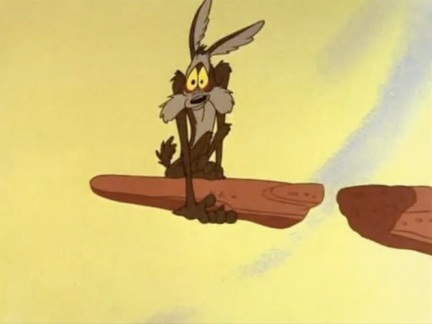 But for most skilled laborers and craftsmen, cunning was the learned bodily truth of their lives, something that even skilled warriors, hunters, and builders knew without having to theorize it. If it’s fallen into disrepute, become the degraded farce of advertisers, Con Men, Stock Brokers, Bankers, and elite bull-shit artists everywhere – a part of the late capitalist arsenal of sophistic practices – don’t blame the Greeks. That’s another story of corruption that’s had a long and habitual learning curve of new tricks and subterfuges… but, alas, maybe there’s somethin about this type of intelligence we need. Even in our cartoons with Wiley Coyote and the Road Runner we see remnants of this old style of intelligence played out in colorful laughter. Yet, indigenous tribes across the globe still rely on this more earthy and resilient form of cunning to live, hunt, and support there worlds; and, even to fight against the encroachment of those very IMF banksters who would through cunning and deception destroy and enslave their lives…

The Philosophers would build their worlds of Being and oust Becoming from the Academy. For the Philosophers the sphere of Being, the One, the unchanging and fixed, of limited, and true and definite knowledge (episteme) was the epitome of the intelligible cosmos, – the harmonious order of the universe. While Becoming was the realm of the multiple, the unstable and unlimited,  a realm of the oblique and changeable opinion. Metis was left without a bargaining chip once Becoming had been exiled from Greek thought. Metis is characterized precisely by the way it operates by continuously oscillating between the two poles of Being and Becoming. Metis lives in a realm of forces, a realm pitted between stability and instability, the limited and unlimited, the realm of adversity and struggle. Plato would have none of this. He sought a utopia freed of struggle based on mathematical and sublime perfection of the mind based of fixed principles and axioms of Being. Metis is based on connivance, opposition, and rivalry that sought movement and becoming rather than the fixed axioms of some stable realm of abstract Being. Metis, the deceiver, the Trickster, the cunning intelligence of art and craft, the skilled worker who knows with his hands and eyes in heterogeneous movement, rather than from some distance or through some conceptual or theoretical installation. The intelligence of metis is the one who placed in the midst of things does not react, but rather knows without having to stop and reflect; rather, the becoming of metis acts and works: a doing not a being.

James C. Scott’s Seeing Like a State: How Certain Schemes to Improve the Human Condition Have Failed:

“All human activities require a considerable degree of mētis, but some activities require far more. To begin with skills that require adapting to a capricious physical environment, the acquired knowledge of how to sail, fly a kite, fish, shear sheep, drive a car, or ride a bicycle relies on the capacity for mētis. Each of these skills requires hand-eye coordination that comes with practice and a capacity to “read” the waves, the wind, or the road and to make the appropriate adjustments. One powerful indication that they all require mētis is that they are exceptionally difficult to teach apart from engaging in the activity itself.”

The notion of becoming, movement, activity: metis as the temporal intelligence of the evental.