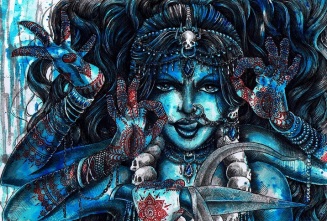 .‘Oh Mother’  – Kali-Ma, Queen of Life and Death: dance upon my ashen bones, dine upon my entrails, feed upon my darkest soul!
…..– Hymn to Night & Time

Smash the mirror: it’s a lie what you tell yourself, the world is invisible and waiting. Let the darkness seep in and envelop you. The world of light you see around you is but the flotsam and jetsam, a drift of rainbow plumage on a sea of energy that seeks its daemonic day in the Sun.

Enter your melancholia as if it were your lover’s body; and like a lover savor its dark passions, then like a Mantis slay it, be done with it, and eat it alive till there is nothing of melancholy left but only the power of your dread life.

Think on Black Kali-ma, an image of the fierce life of creative destruction that is this universe – Time’s darkest face and image: a poetic icon of all that exists in its most monstrous form and formlessness, – being and becoming, the turning plover of the ancient milky way: the sea of milk and pure energia; the ever-turning wheel of death and becoming, the distilling wisdom of tens of billions of years living in the circle of fire at the center of hell: Time’s dark dominion that shapes the powers of all things, good or ill. The Iron Prison within which we circulate like algorithms forged in the electronic void. Broken vessels of some former age of silence wherein the collapse of all being brought forth the bursting flames of being like the breath of a great dragon, only to falter in the extremity of Night’s dark and impenetrable belly…

Seek out the graveyards of ancient fools of time, sit on the headstones of forgotten masters of despair, laugh at the impossibility of your monstrous existence. Then savor its bittersweet tang, and enter into your dark jouissance!

‘I worship Kālī the Destructress of Kāla the Shining One, who is the Bīja Krīm who is Kāma who is beyond Kāla and who is Dakṣinakālikā.’ Gandharva-Tantra says: ‘Hrīm, I bow to Mahādevī who is Turīya and Brahman. He who remembers Her does not sink in the ocean of existence.’ Candī says: ‘Oh Thou whose Body is pure Energia who hast three divine eyes, who weareth the crescent moon, to Thee I bow for the attainment of all Evil.’

2 thoughts on “Monstrous Existence: Icon of Creativity and Destruction”