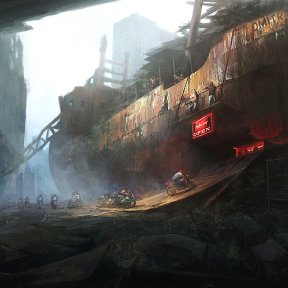 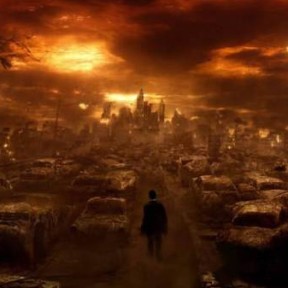 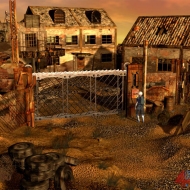 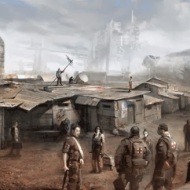 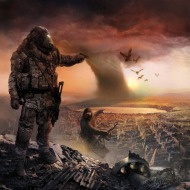 Popped the air-tank, inflated the tires, gazed up into the blanched sky, where the sun like a burning soldier seemed to hang in the orange haze like a bloody fist, red and devilish. As I scooted into the truck, and flushed the ashes from the seat, I kept my eye on Matthias Bowden who seemed to be eyeing me from across the street with his sawed-off shotgun. Didn’t have any slugs in it, not even sure why the bastard carried the rusty thing around with him, unless to scare the street riff-raff who hadn’t yet heard about the poor bastard and his tale.

Twisted tales seem to run rampant on the streets of the Grunge. The city seemed to be a sponge for the darkest materials of the universe. Things fold into it as if the force of the cosmos were invaginating within it, folding back into a nightworld where nothing but the folds of gravity and temperature plunged from deep space, falling into the broken ruins where things old and terrible lived in it’s cold and molten core. Sound, light, pressures, air, all of these things were folded into it and it unfolded these things like a spider twirling out its silk net of death to capture unsuspecting bugs or humans. Yea, the Grunge lives up to its name alright. There is a festering life just below the streets, a froth of ancient capitalism, like a smudge, a noise rumbling below in the sludge of former lives, a hum of energy erupting here and there in spores bursting from the dew laden stones, and rusty, broken steel; caged desires that seemed ready at any moment to find their way back up from the roots of civilization’s graves like ghosts ready for war and revenge.

Matthias was only one of thousands of blaggards who’d lost their minds in this sorry ass labyrinth. Poor bastard lost his wife, kids, and sanity long before the war was over between Mexico and the States. They’d been out picnicking from what I hear one bright day, minding their own business when a Zli’soto biker-cult drove up to their campsite. Needless to say rape, mayhem, death, and torture seemed to be the modus operandi of these thugs, ritual borgs – slicers, slayers, and fugmeisters: general all-around bleeders if you’d asked me. But no one was asking me at the time. Felt sorry for the poor bastard, but wasn’t much to be done but put him out of his misery. But the Consilient had taken care of that, those guardians of Law and Order from the Assemblage. Don’t worry, I’ll get to that soon enough.

Mind-wipe and deneuralized back-wash of his sub-autononomic systems I hear tell. They’d tried to rememorize him: plant new memories, or false ones, the story goes. But they’d not taken, something about his patterns didn’t match the known perimeters of the AI’s datafeeds, etc.. Bungled the job, they did. Waste of a man’s life…  Deadly stuff those technomic’s have. Now Matthias was a sort of glued together salvage-borg, not much good to himself or others except to dig through the ruins, leftovers scattered across the Grunge.

That’s the thing about the Grunge, it’s what’s left of what they used to call Southern California. Exotic territory that once blessed civilization with Hollywood and the accoutrements of a vast mediatainment empire. That was a laugh now I come to think about it. Gazing out over this wasteland is like wandering around in someone else’s apocalypse, maybe one of those old movies from the turn of the century. Yea, in 2187 all that was buried in a pile of rubble ten feet down so thick it’d take a salvager years to get to it now. And, believe me some have tried… treasures down there the Consilient Aristoi would pay high cred for, believe me.

I backed out and drove past Matthias slowly, saying: “Hey, Matt,” smiling easily, “what you styling there buddy.”

He frowned, then grinned ear to ear his idiot smile, and laughed: “I got me a treasure, Rider.” Seemed happy with himself.

Most people knew me by my nickname. Very few knew my real name. Not something I liked to broadcast. Didn’t matter much, anyway, if ConTel’s Enforcers wanted you all they had to do was read your neuropattern. The Assemblage was a massive datastore spread across the planet like the old net once was but different, now it held the patterns for every living human left on the planet. The day of your birth you were chipped and patterned. Nothing you could do about it. The Law was the Law. Reason why I’m on the Outside now. Life’s a bitch then you die. Old cliché but worse now, because they had your pattern: death was just another word for rebirth. Yea, you might not come back the same Joe Schmooze, but your pattern could return over and over and over like a bad dream. One more reason to hate the Aristoi and their Assemblage.

Curious I asked: “What kind of treasure you got there, Matt?”

“Okay, bud, don’t get all worked up about it. I’s just asking… that’s all, I  don’t want your treasure. Forget I asked.”

“Nah, nah… that’s not what I meant, Rider…” he seemed uneasy. “I mean… I need to talk to someone about it. I think it’s dangerous or something. But I just don’t know.”

Now I really was curious, so I said to him: “Well, hop on in the truck, Matt, let’s go see if we can find out.”

He smiled at that and hopped in. I gave him some jerky to chew on, and some Red Man to plunk in his mouth. He seemed obliging. Then he pulled out a piece of paper, saying, “I wrote the address down here, close by where it’s located. Problem is it’s beyond the DMZ.”

He looked at me then kinda scared, his eyes blinking and his breath a little short. I said: “Okay buddy, what were you doing there fore anyway?” No one was allowed beyond the specified barriers, stepping beyond into the Dead Zone was crazy and real dangerous. Mechs patrolled the area day and night. Caught by a Mech and your ass was grass. No… if’s, and’s or but’s… dead, blam, finito…

Oh, sure there were ways around it, but those were as illegal as getting caught, and meant torture if you did get caught. Blinders, drone-splicers, radar-repellants, all the tools of the smugglers trade could be used to roam at will in the Dead Zone. I’d done it myself a time or two and luckily never gotten caught. Had my tools in my shop where Red and Bow ran things for me. Yea, I’m a salvager. About the only means of living in this world left to us outside the Consilient. Just the way of things… survive or perish. No one else much cared which, it was all up to you.

“Matt, I got to make a run to the shop, and get some things. Alright?” He nodded. I started the engine and headed down a side street toward the RedLine. Back of my mind I wished I had the creds for an x-tra fliptop iGalaxy for Betsy. Dam! She’d have to wait for a bit. Knew she’d be pissed by the time I showed up, but it couldn’t be helped. Matt might be on to something… something big, and I’d not know till he showed me what it was. Dam!

I’d need the creds to find Talia, too. I was sure of that.

– Steven Craig Hickman ©2016 Unauthorized use and/or duplication of this material without express and written permission from this blog’s author is strictly prohibited.