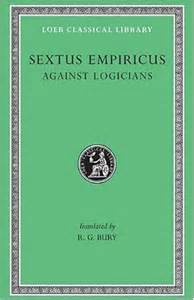 Many will remember from school that our modern sciences arose out of natural philosophy, experimentation and its conflicts with the dogmatic rationalism of the Church. Against certain knowledge these early and tentative steps into scientific forms of knowledge started with a particular mode of doubt and uncertainty in regards to received or traditional dogmatic views onto reality and the empirical. In the fifteenth century our knowledge of the ancient philosophers would get a boost with the rediscovery of both the metaphysical materialism of Lucretius’s poem On the Order of Things, and the rediscover of the writings of the ancient skeptics by way of Sextus Empiricus.

This combination of metaphysical materialism and a revitalization of ancient skeptical thought would inform the age’s scientific and philosophical reflections from about 1450-1710 and beyond. I’ve treated of Lucretius’s poem in other posts, but have not explored as much on the side of skepticism (skepticism) and its influence upon our modernity. In ancient times skepticism was first born as a reaction against certain forms of sophistic and rhetorical dogmatism from within none other than Plato’s Academy. The academic strain of skepticism began with the writings of Arcesilas, c. 315–241 B.C.E., and Carneades, c. 213–129 B.C.E., who worked out a series of arguments, directed primarily against the knowledge claims of the Stoic philosophers, to show that nothing could be known.1 We know of these philosophers primarily from the writings of Cicero, Diogenes Laertius, and Saint Augustine.

The academic skeptics started with the Socratic maxim “All I know is that I know nothing.” This sense that knowledge is uncertain, that those who teach that truth can be known and that its knowledge formulated and described in propositions, both positive and meaningful, are to be mistrusted. In fact the Academics formulated a series of difficulties to show that the information we gain by means of our senses may be unreliable, that we cannot be certain that our reasoning is reliable, and that we possess no guaranteed criterion or standard for determining which of our judgments is true or false. (Popkin) This sense of there being no reliable criterion upon which to found or ground our knowledge and judgments is the cornerstone of the academic skeptic’s mode of inquiry. For these Academic sceptics nothing is certain. The best information we can gain is only probable and is to be judged according to probabilities. Hence Carneades developed a type of verification theory and a type of probabilism that is somewhat similar to the theory of scientific “knowledge” of present-day pragmatists and positivists. (ibid.)

We all remember Einstein’s quip “God does not play with dice!” in castigating his protégés in Quantum Theory when Heisenberg developed his Uncertainty Principle.  Of course it is more restrictive in its judgments than the ancient skeptics notions on uncertainty of knowledge, etc. In deed the uncertainty principle (for position and momentum) states that one cannot assign exact simultaneous values to the position and momentum of a physical system. So what we get is this quantified paradox that the knowledge of the state of a system cannot be mathematically reduced to its position and momentum which is required of us to know the state of the system with any certainty. Therefore all calculations will remain probable rather than exact. Is modern quantum theory based on a form of skepticism? Einstein seemed to think so, and held to his own classical and dogmatic theories to the end. We’ll come back to this in another post.

Pyrrho of Elis, c. 360–275 B.C.E., and his student Timon, c. 315–225 B.C.E. would bring about another revolution in skeptical thought of his era. Against the academics he was not primarily interested in knowledge or uncertainty per se, not interested into our modes of inquiry or that we cannot know with certainty anything at all. No. Rather his was primarily an ethical stance against unhappiness, and the skepticism arising from his thought was both therapeutic and experimental in the sense that it provided a viable philosophy of action against knowledge. As Popkin tells us Pyrrhonism, as a theoretical formulation of scepticism, is attributed to Aenesidemus, c. 100–40 B.C.E. The Pyrrhonists considered that both the dogmatists and the Academics asserted too much, one group saying “Something can be known,” the other saying “Nothing can be known.” Instead, the Pyrrhonians proposed to suspend judgment on all questions on which there seemed to be conflicting evidence, including the question whether or not something could be known. (ibid.) The key to this form of skepticism was the suspension of judgment itself. The Pyrrhonist, then, lived undogmatically, following his natural inclinations, the appearances he is aware of, and the laws and customs of his society, without ever committing himself to any judgment about them.(ibid.)

A sense of quietude and forbearance regarding knowledge and its conditions prevailed in this form of skepticism more concerned with the ethic of therapeutic expulsion or quailing of unhappiness. Yet, for all that it would inform later scientific thought with a sense of limits, boundaries, and doubts concerning our mind’s constructions or experiences of the known world. This would lead to a withdrawal from sensory input and to a greater reliance on our apparatuses: math, instruments, etc. to approach aspects of reality that the senses seemed to foreclose in error. Abstraction is a term we need to break down (from Online Etymology Dictionary):

late 14c., originally in grammar (of nouns), from Latin abstractus “drawn away,” past participle of abstrahere “to drag away, detach, pull away, divert;” also figuratively, from ab(s)- “away” (see ab-) + trahere “draw” (see tract (n.1)).

Meaning “withdrawn or separated from material objects or practical matters” is from mid-15c. That of “difficult to understand, abstruse” is from c. 1400.

That skepticism would lead or draw us away from our reliance on the error prone realms of empirical evidence, even as it used the empirical is one of the quandaries of the sciences that have over time become more and more reliant on mathematical and statistical probabilism, instrumental reason, apparatuses; and, at the same time developing the abstract constructions of mathematical or functional diagrammatic models rather than empirical evidence per se to build up its knowledge of the external universe and of our neuroanatomy is part of this skeptical inheritance. Our computers are mathematical construction kits that build worlds abstracted out and withdrawn from our empirical minds and bodies that effectuate algorithms and procedures that produce knowledge separated out from human disposition and capacity. Computers are the harbingers of an Inhuman turn and revolution occurring that is sweeping away the human-centric and centrifugal systems of knowledge and meaning that have for two thousand years constrained thought.

We’ve become more and more reliant on these external tools of knowledge creation while withdrawing from the finite and empirical seat of reason we once believed unconquerable. Now that no one human mind can internalize the vast storehouse of knowledge, information, and opinion (doxa) concerning the world and its inhabitants we’ve begun to divest ourselves of this extraneous and superficial task, and have begun seeking new ways to combine, compose, and reduce the vast amount of data/information being accumulated to some form of manageable and reliant form of knowledge. It is skeptical forms of doubt and uncertainty that have led us to question the very foundations of the human and our views of the universe and reality. This subtraction and eliminative move is also beginning to reveal other paths toward a skeptical realignment of what it means to be human, one that is based on scientific endeavors rather than on the formidable inheritance of philosophy or religious systems of knowledge. We’re living in a time when philosophy and religion are not so much vanishing as they are irrelevant to the work and task at hand. The sciences, not philosophy or religion are going to provide us answers to the questions concerning climate change, disease, hunger, desertification, volcanic activity, weather patterns; and, even the question of who and what we are that are being tackled head-on in the neurosciences, along with the external investment in space exploration, artificial intelligence, robotics, etc.. Ours is an age of the Sciences, not philosophy or religion. The world economic investment in the sciences is at a premium in almost every global region. The World Data Bank tracks such things: here. But that is another tale…

6 thoughts on “A Short History of Skepticism”