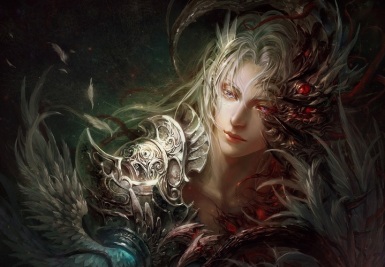 Reproduction and death condition the immortal renewal of life; they condition the instant which is always new. That is why we can only have a tragic view of the enchantment of life, but that is also why tragedy is the symbol of enchantment.
……– Georges Bataille

From Stefan Zweig’s The Struggle with the Daemon: Hölderlin, Kleist, Nietzsche:

“Daemonic” — this word has had so many connotations imposed upon it, has been so variously interpreted, in the course of its wanderings from the days of ancient religious mythology into our own time… I term “daemonic” the unrest that is in us all, driving each of us out of himself into the elemental. It seems as if nature had implanted into every mind an inalienable part of the primordial chaos, and as if this part were interminably striving — with tense passion — to rejoin the superhuman, suprasensual medium whence it derives. The daemon is the incorporation of that tormenting leaven which impels our being (otherwise quiet and almost inert) towards danger, immoderation, ecstasy, renunciation, and even self-destruction. But in those of common clay, this factor of our composition which is both precious and perilous proves comparatively ineffective, is speedily absorbed and consumed. In such persons only at rare moments, during the crises of puberty or when, through love or the generative impulse, the inward cosmos is heated to boiling point, does the longing to escape from the familiar groove, to renounce the trite and the commonplace, exert its mysterious sway. At other times the average man keeps a tight hand on any stirrings of the Faustian impulse, chloroforming it with the dicta of conventional morality, numbing it with work, restraining its wild waters behind the dams of the established order. By temperament and training the humdrum citizen is an inveterate enemy of the chaotic, not only in the outer world, but in himself as well. In persons of finer type, however, and above all in those with strongly productive inclinations, the unrestful element is ever at work, showing itself as dissatisfaction with the daily round, creating that “higher heart which afflicts itself” (Dostoevsky), that questioning spirit which expands with its yearnings into the abysses of the limitless universe.

Whatever strives to transcend the narrower boundaries of self, overleaping immediate personal interests to seek adventures in the dangerous realm of inquiry, is the outcome of the daemonic constituent of our being. But the daemon is not a friendly and helpful power unless we can hold him in leash, can use him to promote a wholesome tension and to assist us on our upward path. He becomes a menace when the tension he fosters is excessive, and when the mind is a prey to the rebellious and volcanically eruptive urge of the daemonic. For the daemon cannot make his way back to the infinite which is his home except by ruthlessly destroying the finite and the earthly which restrains him, by destroying the body wherein, for a season, he is housed. He works, as with a lever, to promote expansion, but threatens in so doing to shatter the tenement. That is why those of an exceptionally “daemonic temperament,” those who cannot early and thoroughly subdue the daemon within them, are racked by disquietude. Ever and again the daemon snatches the helm from their control and steers them (helpless as straws in the blast) into the heart of the storm, perchance to shatter them on the rocks of destiny. Restlessness of the blood, the nerves, the mind, is always the herald of the daemonic tempest; and that is why we call daemonic those women who diffuse unrest wherever they go and who open the floodgates to let loose the waters of destruction. The daemonic bodes danger, carries with it an atmosphere of tragedy, breathes doom.1

1 thought on “Stefan Zweig: On The Daemonic and Tragic Worlds”