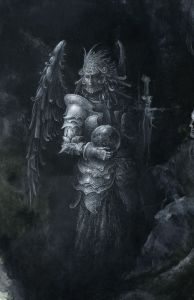 There are moments in the night when I can here the voice –
the utter anguish, the solitude, the emptiness…

How far must we fall before the silence ends?
What would you have me say? What could be said?
Are we not like him formed of ash and clay? Broken vessels?
Our light but a fragment of some dark myth, an illusion?
Trapped among the shattered ruins of this desert world
we hide the truth from each other as if to wake were too much effort.
Ennui, the bitter fruit of acedia. Night wanderings.
Troubling the dark embraces of sleepers, seeking solace.
How many times I’ve opened my eyes to this world
hoping that my despair would fall away like that stranger,
but have found myself restless, always restless.
He must have gone mad long ago in that silent abyss.
Blind, alone, bitter, weeping. What else could he do?
Even we who have heard him in the silences know nothing can be done,
we keep coming back to the old circle of doubt, writing the same passages,
the same lines that lead to this blank page. Nothing can be done.
Sometimes one wants to send him a message, say it’s going to be alright;
but we know that’s a lie, nothing is alright, nothing will be alright.
When the end comes we know our dust will spread its vein wings,
sink into oblivion, find a formless bit of emptiness to hide in,
some black hole where nothing can escape – not even light.
We tell ourselves stories in the night to stave off the inevitable.
In our dreams we cry out to that unbound nihil in its dream;
but all we hear back is nothing but nothing, a murmurless void.
Did he die among those silences like some forlorn thought of being?
Is he – even now, wandering the wastelands of some frozen labyrinth,
waiting there in utter solitude, wishing he’d rotted away among black stars.