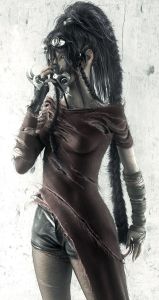 “This was an art nouveau city, a deco city, its sinewy, undulating lines and geometric chic copied from the fashions of the aube du millénaire and imposed on the slums of its twentieth-century inheritance and the sublimities of the past. Again, the pall of greenness descended, a peasouper, a gangrenous membrane, a steamy decay of tropical night. Monorails, skywalks, with their hoards of winepressed humanity, passed above us; autogyros too, with their fat-cat cargoes, hovering above the city’s stagnant pools like steel-hulled dragonflies. Once more, the lightning, and the rain began, coagulating the green tint of the night so that we seemed to be moving through an ocean’s depths. Green was that year’s colour; green, the colour of perversity; a green luminous as a certain pair of eyes.”

Calder heavily influenced by the symbolists and French decadents writes biopunk, or post-cyberpunk fiction that brings back the rich detail of decadent overlays, but with that eye for the streamlined functionalism of the modern turn toward artifice and art deco’s elaborations and motifs. If you’ve not read his work it’s a definite great choice for the linguistic power alone.

With books like the Cipher, about a black hole that transforms one into otherness… In Skin she explores the performance art scene, artistic vision evolves into dementia… Bad Brains in which an artist suffers strange and powerful hallucinations and seizures, during which he sees and tastes things of the world in new ways and relations. Koja is a niche writer, a decadent with a dark bent and delivery. Not for everyone. But for those who know she, too, is a member of the strange club of the dark erotic that blends the fantastic and the real in disturbing ways that awaken you from your death-in-Life.