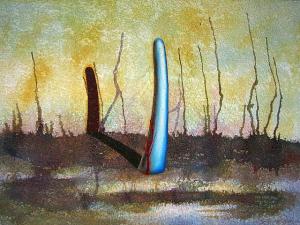 I’ve been re-reading Anti-Oedipus again (is one ever finished reading this work? – that is to say, Shall we ever come to the end of our writing?) . A passage I came across seems to suddenly jut its ugly head up out of the pages, one in which that duplex figure of Deleuzeguattari seem to become almost utterly angry, ready to cry out to the world: Freud, you are wrong: the Oedipus triangle – Father, Mother, Son do not reside in the psyches of modern humans. Then as if coming upon a truth they’d only just now registered in the midst of their struggle with Freud’s familial romance they insert an offhand dismissal: “The family is by nature eccentric, decentered.” This bit of news sits there between two vast metonymic onrushes of the eccentricity of the family with its brothers in the military; a cousin out of work, bankrupt, or a victim of a car Crash; an anarchist grandfather; a grandmother in the last stages of senility, hospitalized; a sister that has run off with a terrorist ready to bomb the Capital. This notion of the decentered, eccentric family where such triangulations as Freud saw in his local Vienna have no place in our postmodern savagery, our barbaric hypercapitalist age of speed and zero degree semantic apocalypse. No. Instead as they suggest the “family does not engender its own ruptures. Families are filled with gaps and transected by breaks that are not familial…” This notion of gaps and breaks… have we not heard this from elsewhere, too?

History, the events of the times, the flows from elsewhere: “the Commune, the Dreyfus Affair, religion and atheism, the Spanish Civil War, the rise of fascism, Stalinism, the Vietnam War, May ’68 – all these things form complexes of the unconscious, more effective than everlasting Oedipus. And the unconscious is indeed at issue here.”1 Then the crux of their anger lifts its head up, the truth that has been waiting in the wings, ready to blurt its way out, to gather about it a space of liberation, of emancipation:

If in fact there are structures, they do not exist in the mind, in the shadow of a fantastic phallus distributing the lacunae, the passages, and the articulations. Structures exist in the immediate impossible real. (ibid., p. 97)

Because of this inconsistency, because Oedipus never forms a “mental structure that is autonomous and expressive”, but is rather “extrafamilial, subfamilial with gaps and breaks” schizoanalysis enters the political and social fields rather than the mental: it “is a militant analysis … not because it would go about generalizing Oedipus in culture… it is militant because it proposes to demonstrate the existence of an unconscious libidinal investment in sociohistorical production, distinct from the conscious investments coexisting with it.” (ibid. 98) To understand how time – the temporal movement of becoming, the sociocultural tempo of the libido in the fractures of the socious show forth the immediacy of desire in all its amplitude. This, this is the militant motion of their work.

3 thoughts on “On Reading Anti-Oedipus… again…”