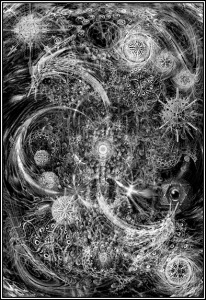 Utter nullity. In the words of the ancient sages of ruined Ashenzohn, it was the endlessness that ends in itself. Dark silence beyond sleep and time, from whose oceanic immensities some bedraggled speck of attention – pulled out, and turned – still dazed at the precipitous lip, catches a glimmer, as if of some cryptic emergence from eclipse. Then a sound, crushed, stifled, broken into gasps. Something trying to scream …

What do you fear most? What lies in the shadows of your thoughts like a lost memory on the edge of oblivion? In the long night of our despair the slow realization awakens out of the outer silences: the ‘Thing’ we fear most, the monstrous truth that will not go away is that we are alone in a universe that neither cares about us nor even acknowledges our existence. That behind the dark screen of the abyss beyond the stars there is no Big Other, no godlike being within or without who cares what happens to us. No god that will save us from ourselves. No one to hold our hands and comfort us when the darkness and decay finally brings us into that endlessness from which there is no reprieve. The namelessness beyond us is utter darkness and nullity; total oblivion.

Trembling at curious words that seemed to keep
Some secret, monstrous if one only knew.
Then, looking for some seller old in craft,
I could find nothing but a voice that laughed.

Lovecraft in his litany of horror weaves the tropes that bring both dread and terror. In one passage he praises the French Decadent Gautier:

Gautier captured the inmost soul of aeon-weighted Egypt, with its cryptic life and Cyclopean architecture, and uttered once and for all the eternal horror of its nether world of catacombs, where to the end of time millions of stiff, spiced corpses will stare up in the blackness with glassy eyes, awaiting some awesome and unrelatable summons.1

A summons that will never come, a resurrection that will remain a lost memory in the dust of years. We belong to the tribe of fabricators, illusionists, makers of false worlds and dreamers of eternity. Yet, in the end our lies are just that: lies against time’s dark curvature, the sense of déjà vu – the amorphous feeling that we have done this before, that we are living through the steps of an eternal cycle that we have repeated over and over and over again from eternity to eternity. That we are not ourselves but rather patterns in a cosmic game of repetition without outlet. Is this not the dark truth we hide from ourselves? Are we mere dust motes in a cosmic funhouse?  Are the hideous faces in the House of Mirrors none other than the distorted image of our real selves staring back at us? And the moment we walk up and seek a clearer image of what lies behind those distorted eyes we discover a darker truth: the Void. The nothingness we are and are not.

“…the consolation of horror in art is that it actually intensifies our panic, loudens it on the sounding-board of our horror-hollowed hearts, turns terror up full blast, all the while reaching for that perfect and deafening amplitude at which we may dance to the bizarre music of our own misery.”
– Thomas Ligotti

Just finished reading Nick’s latest work and was pleasantly surprised that it was a fictional piece, a work of theory-fiction which uses the horror genre as a trope or metaphor for the present strangeness of his mental quest. We do not need to go over the history of Land’s slow fall into madness and decay at his own hands in his search after answers; after his heroic plunge into the abyss where he lost those bearings that keep us bound to the illusions of our tribe. No. This would be to belabor a ghost, an illusion that does not exist. No. The creature who goes by the name ‘Nick Land’ has already moved on, left this darkness for others to wallow in. Instead he lives a parallax life, a life between the gnomic and the betrayed. Nick Land’s eyes are wide open, and what he sees is not the terror at the end of the road, but the fabrications of terror we continue to build up in our illusionary striving after the absolute truth of some forbidden knowledge. Freud/Lacan would have seen it as the death-drive in us doing what it does best: the self-relating negativity that keeps us going.

“We exist within a stream of signs – a torrent. Information flows through us, in overwhelming abundance, as a deluge. It is screened, sieved, filtered, and edited, trimmed, narrativized, delegated to mental sub-systems, dumped, so as not to drown us. Yet, if we can calm ourselves enough to think, it is clear that this flood of signal can have only one possible source: reality.”

“Reality?” What is this thing we call reality? Is it a game, a fiction, a place you’d like to visit but feel it’s better to keep locked up in some dark corner of the mind rather than a place to truly know? Alison’s husband declares: ”

“So what is reality? That’s the question, yes? Don’t you see? It’s telling you. It’s The Flood. It’s total revelation. Every second, it pours in, through hundreds – thousands – of channels. ‘Don’t ask for a sign’ – I’m quoting Phyllis now. Perhaps I have been for a while. ‘You have a billion signs a minute that you don’t want. You’re already in The Flood.’”

In recent years scientists have discovered fascinating things about how our brain actually works. The amygdala (Latin, corpus amygdaloideum) is an almond-shape set of neurons located deep in the brain’s medial temporal lobe. In humans and other animals, this subcortical brain structure is linked to both fear responses and pleasure. Conditions such as anxiety, autism, depression, post-traumatic stress disorder, and phobias are suspected of being linked to abnormal functioning of the amygdala, owing to damage, developmental problems, or neurotransmitter imbalance. (see Wiki) Recently neuroscientists have discovered large amount of data indicating that the amygdala, a particular structure in the brain, is strongly involved during the learning of “conditioned” fear.

What do we know about the Great Filter, really? We have a name for it, if only a provisional one, which says something. It has acknowledged existence. In the terms of the philosophers, it is rigidly designated. Something there is, of which we know nothing, except that it efficiently exterminates all advanced civilizations, at a cosmic scale.

As I was reading Land’s fictional uptake on the ‘Great Filter’, a concept he lifts from Nick Bostrom:

Among recent thinkers, Nick Bostrom has been especially dogged in pursuing the implications of the Fermi Paradox. Approaching the problem through systematic statistical ontology, he has shown that it suggests a ‘thing’ – a ‘Great Filter’ that at some stage winnows down potential galactic civilizations to negligible quantities. If this filtering does not happen early – due to astro-chemical impediments to the emergence of life – it has to apply later. Consistently, he considers any indications of abundant galactic life to be ominous in the extreme. A Late Great Filter would then still lie ahead (for us). Whatever it is, we would be on our approach to an encounter with it. With every new exo-planet discovery, the Great Filter becomes darker. A galaxy teeming with life is a horror story. The less there is obstructing our being born, the more there is waiting to kill or ruin us. (ibid. KL 1134-1141)

As I began to muddle through this it occurred to me that the threat from the Outside is actually in a dialectical reversal actually to be found within the brain’s own processes: the Great Filter is truly deep seated within our own brain’s primitive survival systems that seek to protect us from our own misguided adventures. Could it possibly be that the threat we see externally out there is in fact the primitive response of our own amygdala and other neuronal activity? Are we truly just the victims of our own faulty evolutionary hijinks?

Our brain scientists tell us is shaped by pathological neurons: “Patients suffering from disorders, such as post-traumatic stress disorder or anxiety problems, exhibit disruption of certain neuronal circuits which leads to unsuitable anxiety behaviour responses. The selective manipulation of neuronal circuits that we have identified, using new therapeutic approaches which need to be developed further, could make it possible to regulate the pathological manifestations of fear in these patients.”2 But as in all things science is a two-edged sword. What can be used to help patients can also be turned toward other ends, nefarious ends that could someday be used for controlling vast populaces through fear and terror. Isn’t this the true horror ahead? As Nick Land tells us in his notes:

If we could clearly envision the calamity that awaited us, it would be an object of terror. Instead, it is a shapeless threat, ‘Outside’ only in the abstract sense (encompassing the negative immensity of everything that we cannot grasp). It could be anywhere, from our genes or ecological dynamics, to the hidden laws of technological evolution, or the hostile vastnesses between the stars. We know only that, in strict proportion to the vitality of the cosmos, the probability of its existence advances towards inevitability, and that for us it means supreme ill. Ontological density without identifiable form is abstract horror itself. As the Great Filter drifts inexorably, from a challenge that we might imaginably have already overcome, to an encounter we ever more fatalistically expect, horrorism is thickened by statistical-cosmological vindication. The unknown condenses into a shapeless, predatory thing. Through our techno-scientific sensors and calculations, the Shadow mutters to us, and probability insists that we shall meet it soon.

The dark secret is that we are that thing which we have been and will always be: the shadow that seeks to encompass us is the realization of our own nullity, the fruitless seed of a fruitless universe. Oh, and you were hoping for a sign of hope. Go look in the mirror my friend and tell me if there is hope or terror staring back at you out of those voidic eyes. In the end you are alone with the alone, without support or foundation, born of emptiness you will return to the vastation that is

But will you open your eyes or close them? Will you return to the comforts of you gods and fictions, your human habitations of thought, and zones of safety and marginal beliefs shaped by the cultural others. Or will you enter the darkness on your own terms, confront the bleak truth with your own unknowing mind?