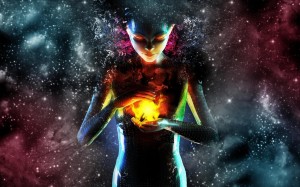 David Roden on enemyindustry has an interesting argument for the total disconnect between humans and our (yet-to-be) post-human progeny (i.e., as he terms them plastics (humans) and hyperplastics (posthumans)). As I was reading this I came back to this moment in the essay:

“A posthuman-making disconnection that resulted in the emergence of hyperplastics would inevitably lead to the result in the instrumental elimination of folk psychological capacities among the population of hyperplastics, at least; since neither the capacity nor the linguistic idiom for attributing propositional attitudes would have predictive or hermeneutic utility.”

More and more what I’m beginning to see is that our current theories concerning the posthuman are actually the formation of new strategies concerning our transitional need to philosophical break out of the malaise of thought: the hermeneutic circle of interpretability that has enclosed us in outworn habits of being. Our very development of a posthuman blank, an unknown known is in itself a sign of this current transition not to a posthuman future, but to a new mode of being and thought that is as of yet ill-defined but visible on the horizon. What form it will take is as of yet to be registered and indexed by the philosophical and scientific harbingers of thought. I see a need for a dialectical materialism that works through the eliminativist strategies, and yet invents out of the negations of negations a new positive strategy which would break us free of the old wars between philosophy and the sciences and create or invent a new form of thought. What form that shall take is still to be invented, but the current struggles among both scientists and philosophers over the priority of thought is to me a good sign that it will come about. One can only see among the decaying fringes signs of something new.

Over and over I come back to this notion of why we plastics invented such illusionary or fictional (figural) entities (tropes) as “mental states” etc. to begin with. It’s as if we have certain unknown anomalies that interfere with our physical systems: pain, disturbances of the mind and flesh, that goads us to understand the causes of such physical disturbances. It was Daniel Dennett, in his influential article, “Why You Can’t Make a Computer that Feels Pain” (1978), argued that the ordinary concept of pain is irremediably incoherent and should be abandoned. His argument relied on some clinical pain syndromes which he dubbed the “reactive dissociation” of pain affect from its sensory aspect.

Yet, our commonsense view tells us that pain exists: my physical nerve endings in a decaying or exposed tooth make me feel the utter atrocity of my situation, etc. Ultimately in his research Dennett  presents a speculative subpersonal functional theory of pain processing, according to which pain processing occurs in many functionally (even anatomically) different components of the central nervous system, mostly in parallel, such that some of them can be selectively impaired. This kind of selective impairment, he says, can produce not only dissociation of the kind we are familiar with, but many more bizarre phenomena we can expect to find and imagine happening. His insight is that our ordinary notion of pain with its essentialist intuitions cannot withstand the implications of such scientific developments in pain research.

The point being that eliminativists want to eliminate the subjective commonsense interpretations of “pain” as erroneous… yet, what do we replace it with? To say pain does not exist does not help me resolve the actual toothache, so if my commonsense knowledge of pain is an illusion then what to do about this physical sensation? Obviously there are those among us – as Dennett studied (RD) who do not feel pain the way the vast majority of humans do. So would the hyper-plastic entity have new ‘value-judgment’s’ based not on sensation, but rather on the true knowledge of the malfunctioning subsystems in question and know how to absolve such conflicts?

When it comes down to it humans invented such mental states (illusions, tropes) as explanatory mechanisms to help them communicate these subjective sensations. As such these supposed presuppositions are symbolic representations of unknown knowns, so that in themselves they may be something else altogether as the eliminativist suggests. Not that the pain doesn’t exist, but that the symbolic representation of that pain in commonsense parlance will need to be modified by scientific knowledge, replaced by a better understanding of the actual physical (sub)processes.

As the Stanford Encyclopedia article on Pain suggests:

…despite significant advances in our philosophical and scientific understanding of pain in the last fifty years or so, there is still a lot of work to be done to develop a fully satisfactory account of pain.

There are other philosophical as well as scientific questions about pain. Do animals feel pain? If they do, is it comparable to the way we feel pain? What are the social, economical, ethical and religious implications of affirmative answers to these questions? How can animal pain be scientifically studied? What should be the methodology of scientific research on animals in general and of animal pain in particular? How can we project the results obtained by pain research on animals onto humans? Parallel or similar questions arise in the case of fetuses and young infants that are even more pressing and urgent for obvious reasons. What is the relationship between pain and pleasure, or pain and emotions in general? What are the ethical and religious status and implications of pain? These and many other questions remain to be the focus of many researchers in the field. (The literature addressing these questions is huge and still rapidly growing; consult the Pain Bibliography cited in the Other Internet Resources section below for representative works.) (see Pain)1

David Roden concludes with the impossibility of such a move:

“I conclude that if hyperplastic agents are possible, we could not understand them without abandoning the conceptual framework we currently use to understand ourselves and our conspecifics. They would be radically uninterpretable.”

What this implies is the need for a new approach, an as yet unknown form or framework of interpretability that moves us beyond the current fold of philosophical jargon that has bound us to two-thousand years of false trails and folk-psychology (intentionalism). Maybe humans need to awaken from their long sleep of the mind and begin sloughing off the vestiges of our ancestral strategies and seek out the unknown that surrounds us with new mind-tools. Do we still have the power to invent reality, impose a new order of mind upon a new realm of truth? Is reality something to be discovered or invented? Is reality open (incomplete) or closed (a total determined system)? Can it be described through linguistic or mathematical signs; or, will it always like some protean guest vanish in our descriptions and arise just out of reach of our human mind-tools?

We as humans are always coming against obstacles and inventing strategies of survival and knowledge to explain what resists us and deigns to destroy us. The basic common sense strategies that have helped us demarcate the unknown knowns are finally breaking down in our time, they are no longer helping us to understand ourselves or our place in the universe. We are in transition and we know it, yet we are for the most part unable and unwilling to let go of our past systems of belief that have up to this point worked so well. Yet, in a global realm where beliefs can destroy (religious wars, racism, militanism in all stripes and forms, etc..) what to do? Will we wallow in the past fabrications passively and silently determined by ancient thought and myths forever, or can we reinvent the truth of what we are and know something new? Can we begin to change our minds?