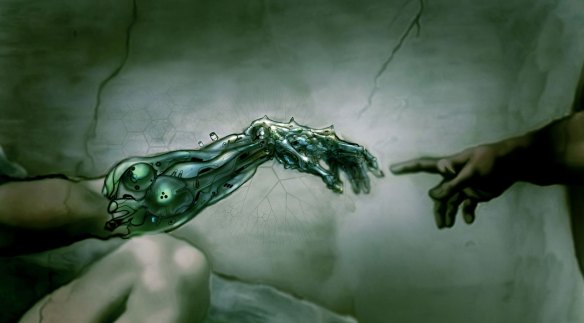 After all these posts on posthumanism of late decided to move from non-ficitional reading, which honestly at this point we’ll only enlighten on detail after detail of the aspects touched on by David Roden in his excellent book Posthuman Life: Philosophy at the Edge of the Human , where he defined the core concept as “the philosophical critique of anthropocentrism in its different flavours”.1 He divided this core value system into four flavors:

1. Speculative posthumanism (SP) – the primary concern of this book – opposes human-centric thinking about the long-run implications of modern technology.
2. Critical posthumanism is a broadly based attack on the supposed anthropocentrism of modern philosophy and intellectual life.
3. Speculative realism opposes the philosophical privileging of the human– world relationship in Kantian and post-Kantian transcendental philosophy.
4. Philosophical naturalism is also opposed to the claim that philosophical truth claims can be arbitrated from a transcendental point of view but uses scientific theory as a constraint on philosophical truth claims. By contrast, while speculative realists are equally hostile to transcendentalism, many also oppose naturalism on the grounds that science is just another way of translating a mind-independent reality into forms that humans can understand.

Since David’s excellent framework engenders an elaboration of texts I thought it might be beneficial to fill out a basic reading list within each of these categories (it is not meant to be a complete bibliography, but my own personal list: take it or add your own – or leave a comment below of your favorites!):

Introductory Texts that will cover the main ideas and concepts from different perspectives (SR is an umbrella concept covering the work of several philosophers, some who even disown the umbrella concept altogether: see here):

All I would add to her list is a couple favorites:

2. Stanislaw Lem: Cyberiad, Solaris, His Master’s Voice, and anything else by Lem

Lem was a satirist at heart, but was a formidable encyclopedist and philosophical speculator, too. I consider him our Swift and postmodern Voltaire.

3. Greg Egan, H.G Wells, Bruce Sterling, Frederik Pohl, Greg Bear, Charles Stross, Neal Asher, Ken MacLeod all have works in this vein. Newitz above covers some of these. In fact one could probably cite hundreds of works in the posthuman vein.

Two that I’m currently reading are Linda Nagata‘s The Bohr Maker (series) and Hannu Rajaniemi’s The Fractal Prince (series)  Both of which I’ll be reviewing sometime in the future.

14 thoughts on “Posthumanism 101: Non-Fiction and Fiction”