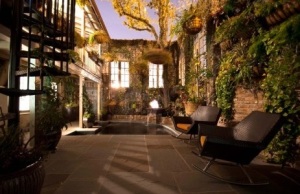 I cannot say I’m a bitter man, I think it goes much deeper than that and escapes such notions of emotion as hate and anger; it’s something else, something more primal, locked into one’s life like two pit bulls cornered in rage, slung into a cage or dug hole without escape, left to fend for themselves, enact what they’ve been bred for all these many years: to fight, to kill, to silence the rage in their own hearts till it bleeds out into the black earth. I’m that pit bull in the cage, and I’m not bleeding enough.

Lobelia Leblanc lived somewhere in that hinterland of my mind where everything I hold precious and dear moves in its own paradisial light. That’s the way it would stay. Yet, something had come along one day and snatched it up, taken it off into a place it did not want to go, into a darkness so dark that even thought itself could not regain control nor move in that thick pit of despair beyond human reason or need. As I walked along the avenue in front of her old home on Dupart Avenue I began thinking about who or what kind of being would have done such an act of horror on my Lobelia.

The clouds seemed to follow my thoughts and were again becoming bluer and blacker around the edges, and it would rain soon which didn’t bother me in the least; rain and I were old friends, and I felt the blues singing in it like an old woman.

As I approached the home itself I saw the yellow cordon tape strung round the edges of the property, and a few technicians still wandering here and there taking pictures and gathering evidence. It seemed the forensics teams these days performed tedious and time consuming, scientific tasks upon sites as if they were studying some ancient culture or archaeological digs. This was Lobelia’s haven, not some ancient tomb to be bled dry for evidence. Yet, what could I do? I wasn’t even a cop anymore, at least not a card carrying one. So I waited till they left and had a look for myself.

Lobelia had a way with plants. She’d talk to them as if they were her friends, dipping, singing, chanting at them like a little girl amid her dolls; feeding them some of her concoctions that stunk like hell, yet seemed to bring those bowered plants in her inner courtyard or sunroom as she called it alive and full of flowers all through the year. As I walked through this area, already I felt a sense of absence, could see the flowers turning a little tepid and dried up. I thought I should tend to them, but then thought better of it. Time. I just didn’t have time to go back into this nostalgia land, run back into my mind an hide like a fool. I had work to do. I had a killer to find. I needed something, anything; a clue to who the fuck this rabid beast is: a shoe print, a spot of blood, an object moved or out of place, something removed. Anything.

I started in the kitchen again where I always seemed to leave off. Dishes still on the table, dirty and waiting for someone to pick them up and clean them. Breakfast for two? Was it someone she knew? Her friend Corina? Or her sister, Clove? Everything about the place setting and the way the napkins were folded, as if both parties had just tipped their lips to them but felt hesitant about unfolding such delicately knotted linen. It wasn’t a man here; and, of course I knew that. She’d been a little angry at me for not taking her to see her sick mom that week. I’d been working a case and just plain forgot. As usual I came by with some candy and roses and she just looked at me stamping her foot to a rhythm I knew couldn’t mean happiness for me.

I couldn’t see anything else out of the ordinary here in the kitchen. So I worked my way down the basement where she did the laundry. Dark and damp, a little musty as always. I’d meant to come in here with a crew someday and remake this whole thing into a world of light. Lay some new linoleum or at least some of those new fangled tiles one sees advertised that look like ancient Greek or Italian marble. She had a few clothes piled up in the corner, and it looked like some more up on her ironing table. Hell, I saw some of my own shirts stacked there nice and tidy. Dang it. Another thing I’d forgotten.

Nothing else here except a few mice and a leaky faucet that needed fixing. She’d ask me about that, too. So many things left undone; unlived.

So I made my way back to the crime scene. Not a site I wanted to see again, but it was their waiting like an old toad. I opened the door. Saw the blood on the floor and sheets; on the walls and ceiling. Even now I had to go back out and puke in the sink. I washed up a little. Stared at the ugly sob in the mirror. Bloodshot black laced eyes, a four day stubble on my face that looked like zebra tracks down both cheeks; tears dried and caked in it like a lost swamp. Dam. Even my hair thick and wiry sat there in drifts like some old goat who’d been left to tend the mud pens for a hundred years. Enough.

I stepped across the threshold into her room, walked carefully around the bed where they’d found her stripped and bare, her body posed and carefully displayed and strung up on a rope in some kind of BDSM pose. A monstrosity. Even now I remember the photographs rather than the actual memory of her in this hateful pose. As my partner Caleb had remarked at the time: “Shit, Jess, this is some kind of ritual thing. I don’t think she died pretty or fast. Dam, boy, we have a serial killer; someone with deep intent, who was seeking to say something.” That statement haunts me. I think he is correct.

But just what was the bastard trying to say? That’s what I want to know. Who was he talking too? Me?

I’m sure as hell not going to find an answer here. That is till I saw a glint off of something laying there in the corner like a bad dream. Looked to be a small origami fold up job, a sort of quick artist gimmick you see the kids do down on the corner of Levine and Calypso for money or food. Making those little angels or butterflies, else horses or other animals and selling them to tourists or any passers by. I lifted it up not sure what to make of it. Wondered if it was hers or not. I’d not seen it before, but it left a chill in me nonetheless. It didn’t seem to even look like anything known, not an animal or a bird; insect or bug of any type I could make out; almost as if it were some kind of private message or icon, some abstract bit of nothing that only the person that made it could understand. I just couldn’t be sure. So I carefully put it in my coat pocket where it would sit till I could make it to old man Lee’s joint down of Sybert Street. That Nipponese knew a thing or two about such things, maybe he might know what it is.

Either way I was done with this joint, even if I wasn’t done with my memories of her in it.

Comments are welcome and needed. This is my getting wet in noir, a first stab at this genre, and all the insight I can gather (likes, dislikes, whether its too sentimental, gritty, etc.) will help out. Obviously as I’ve said before this is a fast storyline mode for the first run through. Just getting the ideas and story down day by day. I’ll come back on the 2nd draft and start filling in details of character and setting, but for now the story itself is driving things. So if you’d be so kind drop me a comment, tell me honestly what you think. 🙂

Read the rest: Flowers for Lobelia – Noir Novel in Progress

3 thoughts on “Flowers for Lobelia: Chapter One: Scene 3”