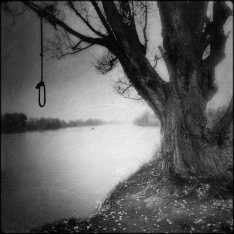 I saw him hanging there on the tree;
His once slim neck broken, swung free.
No one likes to admit this possibility:
a man’s life swinging on a tree.

4 thoughts on “The Suicide”