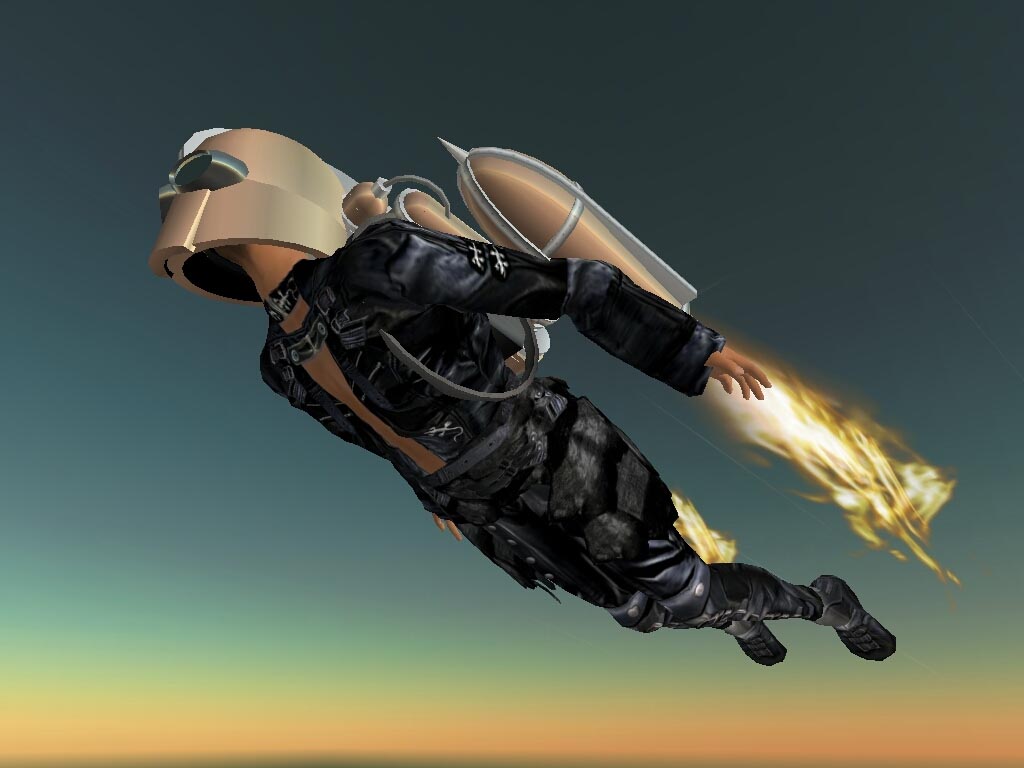 Pete Wolfendale (on twitter this morning) is considering renaming Left Accelerationism as Jetpack Communism. With Zombie Liberalism running the show under the guise of neoliberal cannibalism we might need a few quick getaway zoot-suited jetpacks in our arsenal of dadaesque toolsets to keep us one jump ahead. We might also need a little light-hearted whimsicality after such dark portents of technophilic capitalism and ever prevalent fears of alien invasions from the future by energized agents of the techoteleoplexic spacetime continuum: factions bearing bladed seriousness for whom DNA resampling and world AI Intelligence vats ride the accelerating wave toward some neo-fascist datamarket of tomorrow. But is this Left accelerationism after all? Isn’t the truth a lot more down to earth than that? A little too serious for such blipscreen hijinks and pie-mode skydreams of ousting the market monkeys and their skynets from the futural warplands?

But that’s the problem isn’t it, that accelerationism takes itself a little too seriously? As Eugene Brennan says in “Debate is Idiot Distraction”: Accelerationism and the Politics of the Internet “While accelerationism is the subject of warranted criticism for possible political complicity with neoliberalism and a problematically macho tone, accelerationist writing is also criticised for self-conscious seriousness. The tone of seriousness, however, actually carries a compelling implicit argument: in an era saturated by nostalgia and regressive whimsicality in culture and politics, and a dearth of ambition, we would do well to approach collective experience with a sense of seriousness.”

As Patricia Reed in her essay Seven Prescriptions for Accelerationism for the recent #Accelerate: the accelerationist reader satirically reminds us: “In an era characterized by the injunction to self-brand, it should come as no surprise that manifestos now come pre-hashtagged, forecasting their own viral update” (523).1 Resembling the neoliberal adverts it claims to surpass in its accelerating ambitions to move through the technocapitalist bubblegum world like a photon torpedo wrapped in neon glit toward a target of post-capitalistist society, accelerationism on the surface seems situated between total doom and total success depending on which net pundit you talk too. AS Reed equitably tells it “…reactions have been hasty and plentiful. Yet commentary that either blindly champions #Accelerate…, or condemns it as neo-futurist-fascist travesty, rarely grasps the potential at stake, caught up in the buzz of a name that, unfortunately, obfuscates its content” (523). All true, all too true…

As a recent symposium (2013) suggests what needs to be posed is the question once raised by Deleuze and Guattari: Which is the real revolutionary path? To withdraw from the world market or, on the opposite, to go further and “accelerate the process”, as Nietzsche already suggested long before the current Stillstand? For example today Germany finds itself in the eye of the storm: a mild social democracy at the center of Europe watching neoliberalism freely devastating the rest of the world. (see vids: here)

One the biggest debates recently is over the notion of the future itself. As Steve Shapiro tells it “Among all its other accomplishments, neoliberal capitalism has also robbed us of the future. It turns everything into an eternal present. The highest values are supposedly novelty, innovation, and creativity, and yet these always turn out to be more of the same. The future exists only in order to be colonized and made into an investment opportunity. The genuine unknowability of the future is transformed, by means of derivatives trading, into a matter of calculable risk.” (see More on Accelerationism) This notion of no more future ahead of us, of the feeling that we’re accelerating in a vacuum faster and faster to the point that everything is now, and that we are slowing down rather than moving forward, that we are decelerating while accelerating: a paradox that leaves one feeling a bit like those passengers in the Battlestar Galactica series who on jumping into hyperspace felt like they were imploding in toward the past even as they were expanding and accelerating toward some other quadrant of the galaxy. A sort of full born nausea effect of the neoliberal order as financial capitalism with its surface neon reveals below its light exterior the dark tentacles of some shaggothic beast out of H.P. Lovecraft. This neo-Gothicism at the heart of neoliberalism with its zombie frenzied hypermarkets that consume data like quantum vampires in search of more hearty fare.

Maybe Reed is right, maybe what we need is to understand the name, for it is only in a name that “a thought can be opened up beyond what is, as a cognitive site where imagination can begin to de/restructure the existent” (524). As she states it #Accelerate is a verb, its not a novelty but rather a reforming thought, one that seeks intensive directional energies of anticipation and revisionings, and most of all one that wishes to reorient us toward the future rather than the past. It is the future after all that we shall discover hope and a mode of solidarity and action that can truly manifest and bring us together in a ways of creativity and innovation that might just help us construct a collective life worth living.

As part of this ongoing process she offers the notion of eccentric attractors: new coordinates through which the fallibility or contingency of existing normative points are demonstrated. She continues: “A constructive work, creating eccentric attractors that both emit and absorb affectivity, generates impetus by magnetizing new norms of practice, the mutability of which is subject to endless reengineering. (525)” Such a reengineering of the socius becomes a tactic within the accelerationist arsenal, one that puts into play the true definition of accelerate which she defines as a “measure of the rate of change” rather than as speed (526). As she tells it an eccentric future is nether nostalgic nor doom laden, but is rather open-ended, speculative: “To speculate is to articulate and enable the contingencies of the given, armed only with the certainty that what is, is always incomplete; to speculate is to play with the demonstration of this innately porous, nontotalisable set of givens” (527). Instead of probabilistic thinking she offers epistemic fallibility: “to deploy fallibility as an engine in the never-ending effort for socio-technological … redefinition, implying a thinking of time adjacent to the present, since to remain in the present is to refuse the inexistent” (527). Yet, we need, she says, to embrace in equal partnership the operational, technological and epistemic restructuration in unified acceleration rather than in isolated movements otherwise such eccentric modalities would end in failure.

She asks the difficult question: Can any project directed towards the future do without belief or idealism as such? No, she says matter of fact. One needs speculative possibility effectuated through fiction, a “fiction that maps vectors of the future upon the present” (529). She goes on to add:

“A type of fiction unleashed upon ossified norms…, modes of being and forms of use, projected through that delicate silver between affect and effect: a medium yoking the dialectics of sensibility and practice. This is a fiction driven by anticipation (the unknown); a fiction that lacerates and opens the subject towards what awaits on the periphery of epistemic certainty. It is an image that Accelerationism must embrace the fictional task of fabulating a generic will with a commitment equal to that which it makes to technological innovation. (530)”

We will need new navigational and geometric tools of perception and mentation to move with the pace of acceleration as we map this futural construction, because the “framework of perceptibility is a quintessential arena within which to accelerate our geometric imaginations” (532). One of her concerns is the Prometheanism: Can the Promethean operate in a nontotalizing fashion, or is it forever doomed to regimes of determination and command? Instead of totalizing modes and procedures she says we might concentrate on the generic commons, the scarcity of resources and the realm of cooperation and sharebility in which the generic thought of value creation resists totalization.

Finally, the notion of abstraction, Reed reminds us, must be renounced and instead we should reclaim its power of experimentation, production, and value creation beyond the “colonization by finance capital and labour relations,” and, rather “invent new modes of cohabitation” for this is a force in desperate need of acceleration (536).

She offers many relevant points, and ones that many of the critics have already lambasted the manifesto for, yet as Williams and Srnicek have stated the manifesto is not some solid set of commandments written in stone or some constitutional document to be followed to the letter of the law, but rather it is a open-ended revisable and updateable contingency plan in a continuing war against neoliberalism and its totalized system of capital. So much is still in need of debating and revising, but the essential elements are in place. One might develop a more nuanced and generic language within which to couch its message, and as she has stated we need poets, artists, writers, thinkers – all forms of creative input along with scientists, economists, health and education, and almost every other form of knowledge ecology at our disposal to develop something viable going forward. But most of all will be the rock bottom funding to jump start the project, to create a viable institution or think-tank around which meetings and conferences, libraries and town-halls can gather, talk, discuss, share, and breed ideas and pragmatic solutions and open the gates toward solving problems. Unless this is done one does not see this going much further than a series of conferences and lectures by isolated academics singing to the choir in a happy daze of information that is and will remain moot unless it enters the real world of institutional and policy changing political reality.