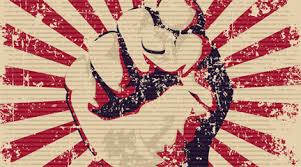 Been a quiet week. Been actively writing on my dystopian novel.  One could throw a whole reading list at the revolutionary era of the Bolshevik’s. Thinking on the era between the October Revolution and the death of Trotsky one could spend a lifetime. But to put on top of that our own era, a prelude to so many strange worlds opening up as we move into a multipolar reorganization of life on this planet with all that entails in human suffering, as well as the impacts that may be unleashed by the new sciences and technologies of Nanotechnology, Biotechnology, Information Technology, and Cognitive Science. One can only wonder and surmise what possible consequences face us in the near future. Not to mention all the other aspects of resource depletion, climate change, famine, and all the other dire apocalyptic imaginings.

To create a speculative fiction based not only on all these factors, but on the latest philosophical literature available is almost mind boggling to anyone attempting to compress our eras struggles without being either too complex or too simplistic and reductionary.  That no one person could ever begin to master the data needed to understand every facet of our coming eras struggles is in itself telling. Even the notion of a “mastery of knowledge” seems vein in our time. Knowledge is fractured, frayed by its vast storehouses of archives and endless labyrinths of databanks that only a machinic consciousness could hope to interrogate much less apply any structure or narrative decomplexification for human consumption. Maybe that’s just it. Maybe the whole Enlightenment project is now bankrupt to the point that the idea of building a Rational Order of the Ages is becoming a perfect nightmare without outlet.

Maybe our accumulation of knowledge is just like our vast accumulation of surplus value an endless and monstrous assault against history itself. Why else so many present day movies and novels filled with zombies? Are we becoming so oversaturated by the accumulation of guilt and shame at our own dark histories that we too are becoming entombed in our own machinic transformations? Maybe all those followers of accelerationsim are instead of speeding things up really moving us into a slow dance of dead space, an endless revolution in stasis that appears to be another version of Plato’s moving image of eternity, but is only ever another vision of the living dead or of that Death-in-Life of which the counter-enlightenment forcast?

In our dystopian fictions we seem to be merging apocalypticism with the agon of political struggle. What’s sad is that the reader’s market is becoming saturated with such mindless fare in what they are terming YA Dystopian fiction. Most of this fare is good entertainment, but has little to do with awakening people to a knowledge of their predicaments. Most of it caters to our pruient desires rather than an infiltration and disturbance of our ethical being. Until we can awaken a passion for real change rather than titillation we will continue down the path of decadence and decay being coopted by capital and its minions.

As I read of the history of these men and women who struggled against Tsarist Russia I see people who took their ideas into the streets, who seized the moments of their lives with passion and intelligence. Like any human struggle mistakes were made, and leaders turned dictators betrayed the original intent of the movement to ends other than originally intended by the majority of participants. This is to be studied, learned from, and not to be repeated but to be lived through with one’s eyes open. If communism is an Idea that has yet to be realized, and I think it is, then we have much to do, much to know, much digging into our own dark hearts so that such worlds as in a parallel dimension will oversee our steps as we move into our own brave futures. We need passion and desire and much intelligence, but most of all we need people who are willing to once again take up the banner of struggle in our world. I waver between utopian dreams and dystopian nightmares like a madman who seeks a way between, an alternative to false hopes and broken dreams.

Once again we need to understand this heritage. We need to know what they did: – their actions, their thoughts and aspirations, their failures and their compromises, the inner history of their souls struggle? Who were these passionate souls who fought against such odds to create a new world based on egalitarian justice? What happened? Why did it fail? Why did such a monstrous being as Stalin betray the revolution? How did Trotsky fail? As well as the West, how and why have we allowed such imperial systems to arise in our midst? What are we doing about it? Why are we sleepwalking through existence allowing the earth to be consumed by this system of accumulated waste? When will our revolution begin? The one in which humans finally decide enough is enough, that it is high time we learned to collaborate with each other rather than killing each other in endless nightmare wars…

All these types of ideas feed into my overwrought imagination as I continue writing my fiction… I think of this blog as a way to resurface from my dark caves, my subworlds of struggle. I flow between pessimism and nihilism like a ghost wandering through an archive of our fractured era. I sometimes think of one of our future machinic progeny resurrecting my mind from the data banks of some long buried archive, retrieving the information stored in my terror ridden synapses trying to understand why I spent so many pointless hours struggling against the inevitability of the machinic future. In our fantasy conversation I tell him the truth:

“I still believe in the magic of the word human, I still believe in the passion of organic life, of pain and joy, of all the little passions that arise from doing things for the first, second, or even, last time; for feeling the sun on my face, of the first cold breath on a winter’s morn, of the touch of my loved one, and her kiss, of human thought and the passions of the mind; of all the thousand and one tales of impossible never never lands that once strewn the corridors of vast libraries where human imagination believed in itself; and, most of all believed in a future worth living in, where we could all live and work and love and play passionately; of my breath on a lute, of listening to Chopin, Mozart, Schoenberg, to Jazz, Rock, and, even, Counry music; to long walks in the mountains, along soft sandy beaches, or, even the cavernous river trips kayaking… and, most of all, of gazing into the night of endless stars wondering about the myriad alien worlds where other life forms have emerged out of this strangeness, and the mysteries of the universe that we have barely begun to comprehend.”